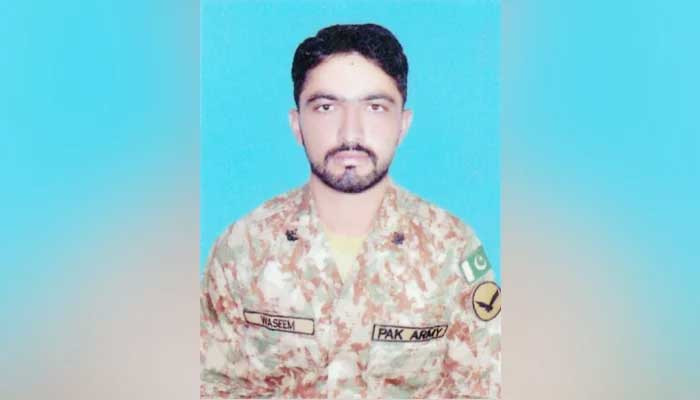 RAWALPINDI: A Pakistan Army soldier was Saturday martyred and four terrorists were killed during a clash in Khyber Pakhtunkhwa’s Bannu, the Inter-Services Public Relations (ISPR) said.

The military’s media wing stated that the brush happened after the security forces conducted an intelligence-based operation (IBO) in the general area of Jani Khel in Bannu.

During the operation, the ISPR stated, an intense fire exchange between the military’s troops and terrorists took place; however, the soldiers effectively engaged their location.

Resultantly, not only were four terrorists killed in the process but weapons and ammunition were also recovered in the operation, as per ISPR.

However, during the exchange of fire, 25-year-old Sepoy Muhammad Wasim — a resident of Khairpur — fought gallantly and embraced martyrdom.

The security forces, following the incident, are carrying out a sanitisation of the area to eliminate any other terrorists found in the area, the ISPR added.

The IBO comes days after militants belonging to the outlawed Tehreek-e-Taliban Pakistan (TTP) overpowered security personnel at a Counter-Terrorism Department (CTD) in Bannu.

The facility was cleared almost three days after the takeover but left four soldiers martyred in the process, while 25 terrorists were also killed in the centre.

For the past few weeks, Pakistan has witnessed a fresh wave of terrorism with the most recent spate of terror attacks carried out in Balochistan and Khyber Pakhtunkhwa.

In response, Pakistan Army’s top brass Wednesday resolved to uproot terrorism “without any distinction” as the country battles a fresh wave of insurgency, which has left many soldiers martyred and several others injured.

The National Security Committee (NSC) had also, a day earlier, decided to turn up the heat on the militancy with relentless counter and preemptory measures to neutralise the threats present in the country in any form.

“Terrorists are Pakistan’s enemies and the entire nation is united on the single narrative of standing against terrorism,” the NSC participants were quoted as saying according to a statement from the PM’s Office.