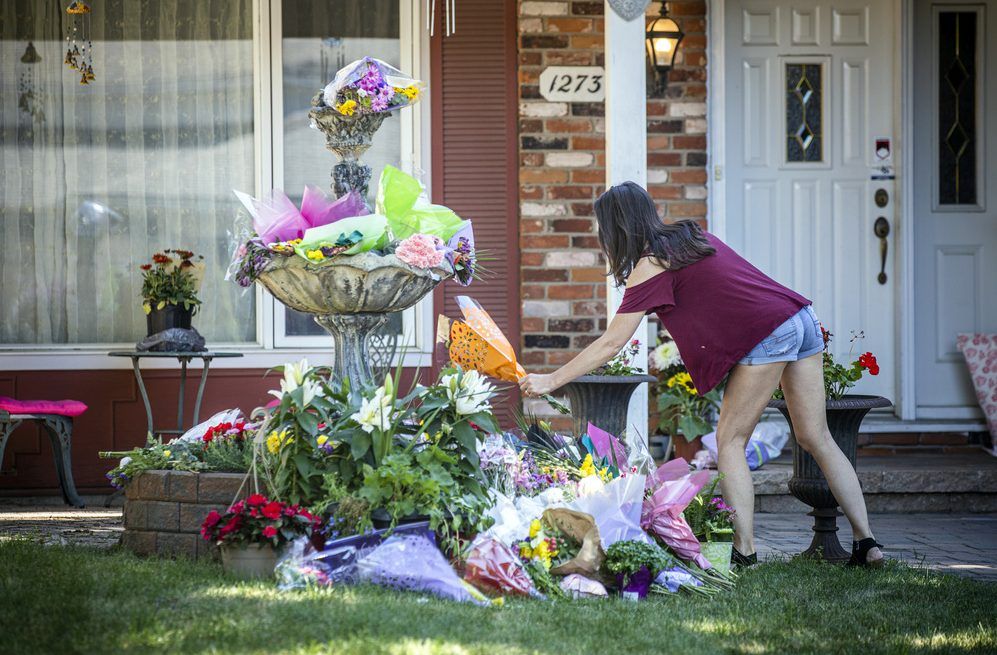 The tally of Ottawa-Gatineau’s homicides crept up slightly from 15 in 2021 to 18 last year, with stabbings and second-degree murder charges dominating.

The Ottawa Police Service investigated cases involving 16 victims — eight females and eight males — and 10 arrests were made. The Gatineau Police Service responded to the killings of two men that both led to arrests.

There were a total of 15 homicides in Ottawa-Gatineau in 2021, according to Statistics Canada.

Among those who lost their lives in Ottawa were Anne-Marie Ready, 50, and her 15-year-old daughter, Jasmine, who were fatally stabbed during a brazen June 27 attack on Anoka Street near the intersection of Bank Street and Heron Road.

The attacker, 21-year-old Joshua Graves, a former neighbour, was shot and killed by police while he was stabbing Catherine Ready, the 19-year-old sister of Jasmine. Ontario’s Special Investigations Unit subsequently cleared Ottawa police of any wrongdoing in the death of Graves.

The CBC reported that Graves had been charged with criminal harassment, assault and sexual assault and then released from custody just three days before his attack.

In late March, Marie Gabriel, 24, was beaten to death. Her body was found in her Heatherington Road townhouse. Jean Fenelon, the 40-year-old father of Gabriel’s two young children, was charged with second-degree murder. Gabriel’s brother told this newspaper that Fenelon was controlling and manipulative and that Gabriel had long been trying to leave the six-year, on-and-off relationship.

Also in late March, a Canada-wide warrant was issued for a 16-year-old charged with first-degree murder in the shooting death of Ottawa woman Sahur Yare. The 20-year-old died Feb. 21 after she was taken to the General campus of The Ottawa Hospital with gunshot wounds.

Of the four other female victims of homicide, two were Inuk and two were elderly Asian women.

Savanna Pikuyak, 22, was killed in mid-September, days after she had moved to Ottawa from Sanirajak, Nunavut, to study at Algonquin College. She responded to a Facebook ad to rent a room in a three-bedroom townhouse near the college. A week after Pikuyak moved in, she was killed and her roommate, 33-year-old Nikolas Ibey, was charged.

Ibey initially faced a charge of second-degree murder, but the charge was subsequently upgraded to a first-degree murder. A first-degree charge is laid when the killing is planned or deliberate, or occurs in the commission of another offence such as sexual assault or forcible confinement, among other specific circumstances.

Then there was the case of Mary Papatsie, who grew up in Pangnirtung in Nunavut and who had lived in Ottawa for about a decade before being listed as a missing person in 2017. In September last year, the remains of Papatsie, a 39-year-old mother of 10, were found on a construction site in Vanier.

“We have little faith that her case will be prioritized because, while she was missing, it was not prioritized,” she said.

Also in September, Ottawa police charged a 57-year-old Ottawa man with manslaughter in the death of 78-year-old Yu Kun Xie. Police were called to a Gladstone Avenue address near Booth Street where the woman was found badly injured. She died the next day and Ian Rooney was charged.

In November, 88-year-old Kieu Lam was found dead at a townhouse on Bowmount Street in Ottawa’s east end. Her daughters, Chau Khanh Lam, 56, and Hue Ai Lam, 59, were charged with first-degree murder.

Four Ottawa men, three of whom were in their 20s, died in shooting incidents.

Abdulhamid Haji Ragab, 24, who was shot on early July afternoon in the 200 block of Banff Avenue in the Banff/Ledbury neighbourhood. Within a week, police had arrested Ottawa police have arrested Chawn Lemieux, 23, and charged him with second-degree murder.

In mid-July, police charged Yohanna David Chol, 36, with second-degree murder after Vuyo Kashe, 36, was gunned down during a late-night shooting in Lowertown, on Clarence Street near King Edward Avenue. Chol faced deportation to South Sudan in December 2021 because he was a danger to the public, but a judge ruled that deporting him would have put him at risk of death or inhumane treatment.

In early October, two Ottawa men, Krishel Kanin Murphy-Nimblett, 28, and Mohamed Omar Mohamed, 23, were shot dead in the parking lot of a plaza on Tompkins Avenue and Tenth Line Road in Orléans. Police determined the men killed each other, after exchanging gunfire as they sat in a car parked in the lot.

In early January, Inuk man Silasie Pillaktuaq, 34, was found dead in a Russell Road apartment. Curtis Kanayok, 31, was arrested for second-degree murder in the stabbing death.

A few weeks later in January, Jayco Partridge, 40, was found seriously injured at a Hannah Street address. He was taken to hospital, where he died. Devon Wynne, 28, was charged with second-degree murder in that stabbing death.

In mid-September, 19-year-old Marcus Maloney lost his life following a triple stabbing outside the Dollarama store in the St. Laurent Shopping Centre. Mohamed Osman, 18, was charged with second-degree murder and two counts of aggravated assault.

In April, 87-year-old Richard Rutherford was killed in the Smyth Road home that he shared with his male spouse. Ottawa man Philippe Hebert, 69, was charged with second-degree murder.

In Gatineau’s Aylmer sector, Trevor Turner, 22, was stabbed to death in late May. Gatineau man Kieran Burbank was arrested and charged with manslaughter.

Also in Gatineau, two residents, Éric Dion, 41, and Caroline Dupuis-Lepage, 31, were charged in March with second-degree homicide and arson endangering human life in connection with a Jan. 26 fire on Gatineau’s Rue Saint-André that claimed the life of Martin Rock, 43.