HomeVideoUniversity Of Idaho Murder Suspect Left DNA At Crime Scene?! All The...
Video 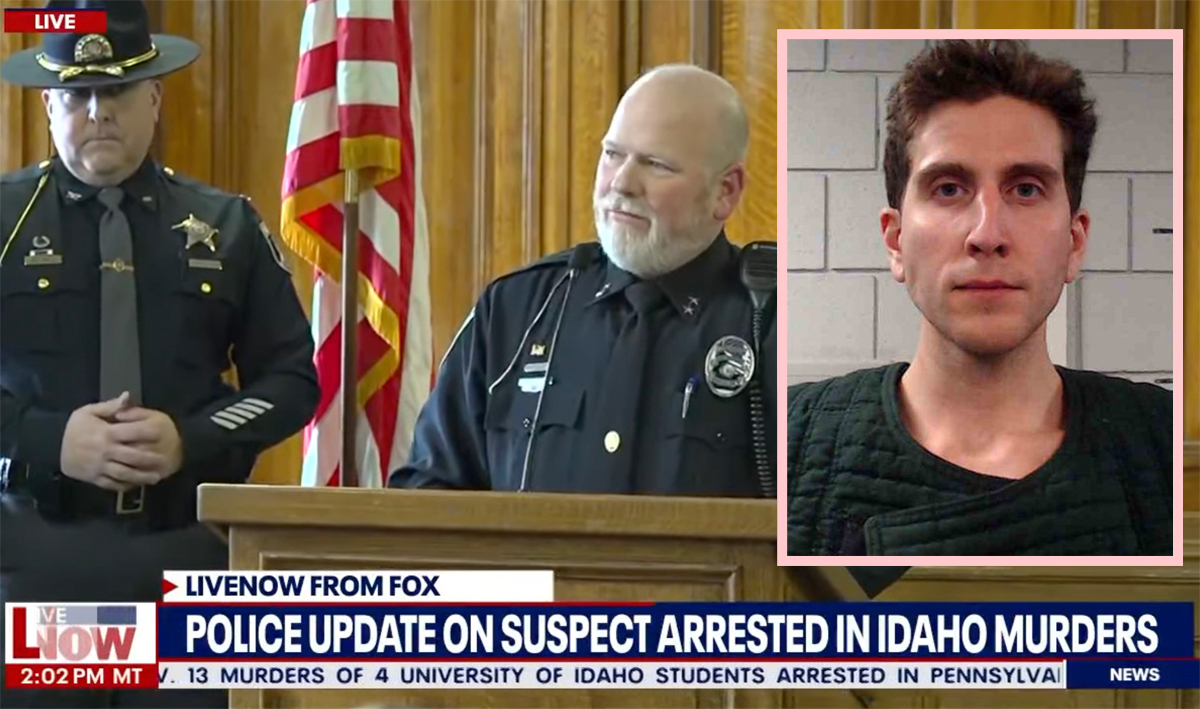 More information about the arrest made in the case of the University of Idaho murders has been revealed.

As we’ve been reporting, Kaylee Goncalves, Madison Mogen, Xana Kernodle, and Ethan Chapin were stabbed to death in their off-campus home in Moscow, Idaho, on November 13. For weeks, law enforcement was unable to name a suspect or locate the murder weapon, believed to be a large knife. However, police finally made a huge break in the case on Friday morning when they arrested 28-year-old Bryan Christopher Kohberger.

Not too many details were made available at the time, except for the fact that he was a criminology graduate student at Washington State University in Pullman – which is a short 15-minute drive across the state line to the victim’s home. NBC News also reported that at the house where Bryan was found, cops discovered a white Hyundai Elantra. But that’s not all. When he was taken into custody, NewsNation reporter Brian Entin alleged that he asked cops “if anyone else was arrested” — seemingly implying that there might be an accomplice still on the loose.

Other than these details, it’s been tight-lipped from the cops. But just hours after the arrest, the police are now speaking out about the update in the homicide case. During a press conference on Friday afternoon, Latah County Prosecutor Bill Thompson revealed documents were filed in Latah County on Thursday to charge Bryan with four counts of first-degree murder, as well as one count of felony burglary (because he allegedly broke into the home).

Related: Police Make It Clear They’re After Parents In Case Of Missing 11-Year-Old

As to what led law enforcement to the suspect? Well, Police Chief James Fry was not able to disclose that important information — or answer a lot of other questions either. He also noted they’re still investigating his motive in the attack and searching for the murder weapon. Plus, Fry would not share if he knew the four students:

Fry further acknowledged the victims’ families and Moscow residents who’ve grown frustrated by the slow progress of the case over the past couple of weeks:

“This was a complex and extensive case. We developed a clear picture over time … and be assured that the work was not, the work is not done. I recognize the frustration with the lack of information that has been released. However, providing any details in this criminal investigation might have tainted the upcoming criminal prosecution or alerted the suspect of our progress. We will continue to provide as much information as we can as the process moves forward.”

According to Thompson, an arrest affidavit detailing the facts behind the charges will be made public once Bryan “is physically back in Latah County and is physically served with the arrest warrant.” At that time we’ll learn a lot more…

While officials are not spilling many details about the arrest, sources have come forward to shed some more light on what went down. Two law enforcement insiders who were briefed “on the investigation” told CNN that police zeroed in on Bryan after his DNA was found at the home where the four students were murdered. They also connected the owner of the white Hyundai Elantra seen in the area of the crime to the suspect.

Authorities then learned he left the Moscow area and headed to Pennsylvania, where an FBI surveillance team from the Philadelphia Field Office was tracking him for four days. The Moscow Police Department, the Idaho State Police homicide bureau, and the FBI teamed up with prosecutors to gather enough probable cause to get a warrant. After the arrest warrant was issued, they were able to arrest Bryan.

No one else has been brought into custody at this time. When asked in the press conference if police were looking for additional suspects, Fry responded:

“We have an individual in custody who committed these horrible crimes.”

Moving forward, Bryan is being held at Monroe County Jail in Pennsylvania without bond until a court hearing on extradition to Idaho on January 3. Thompson said a public defender was appointed for him. Since he was arrested in another state, Fry explained that he can either waive extradition and voluntarily go back to Idaho. If Bryan doesn’t willingly return, Moscow police will get the governor involved. Basically, how long his extradition will take is up in the air and depends on whether or not Bryan contests it.

We’ll have to see what happens next. You can watch the entire press conference (below):