HomeVideo10 Great Sci-Fi Movies That You Didn't Know Were Based Off Books.
Video

10 Great Sci-Fi Movies That You Didn’t Know Were Based Off Books. 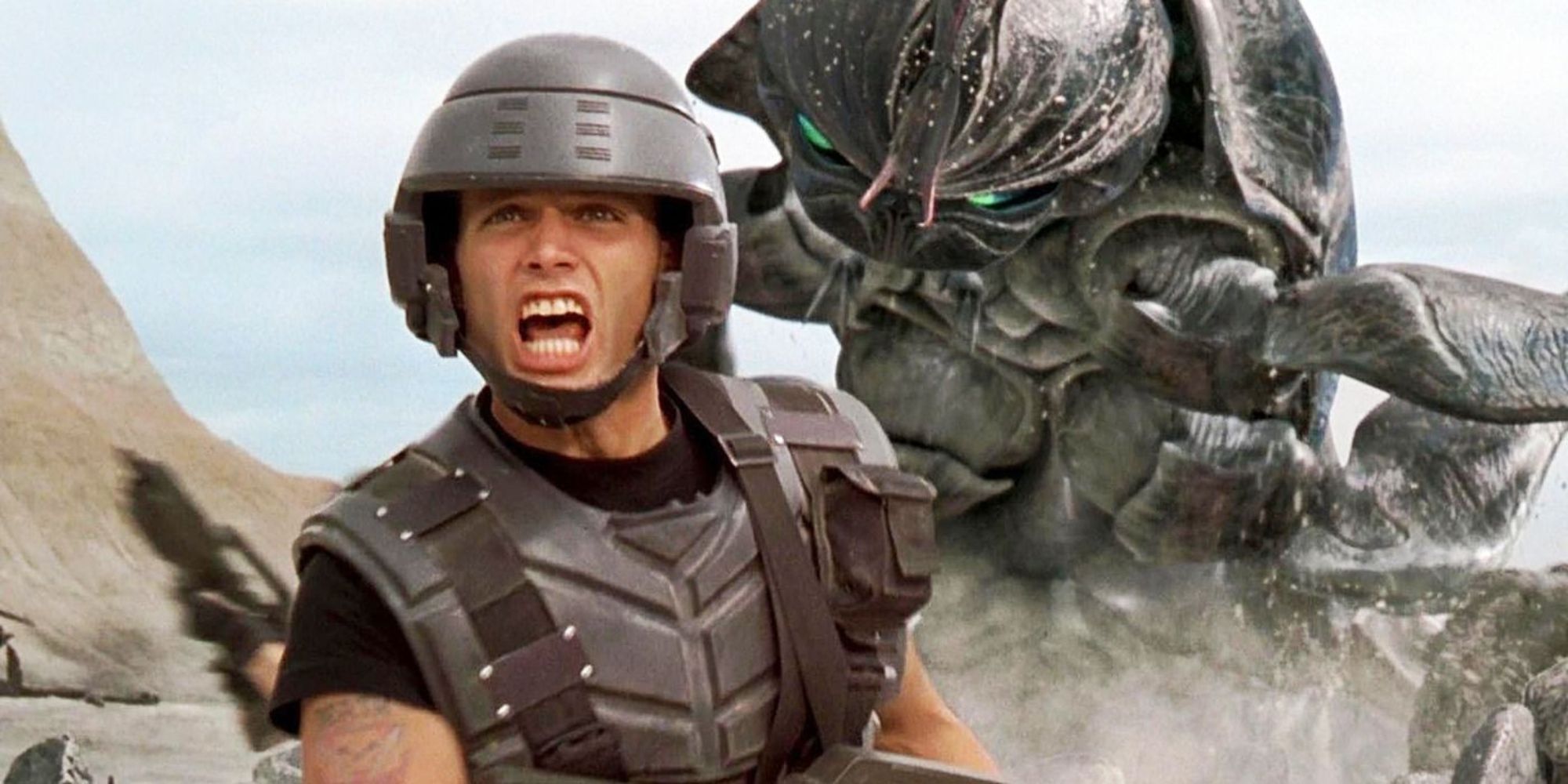 Science Fiction has developed a hardcore community of fans because it offers something most other genres do not, an entire universe to accompany their stories. A good science-fiction movie isn’t just a movie. It is an epic to lose yourself in and contains the lore and characters that accompany whatever your imagination desires after the screen turns black.

RELATED: ‘The Best Sci-Fi Movies of the 21st Century (So Far)’

Enjoying the escape from reality and replacing it with robots and aliens is a satisfying endeavor, but unfortunately, after the movie ends your imagination might crave a little more. Luckily we have the answer, as all these great science fiction movies have books to help rediscover the future through the lens of the original authors, and scratch that itch for the viewers wanting more.

In the year 2274 life on earth only exists in Bio-Domes that are completely controlled by computers who run a hedonistic society, as they fulfill every desire that could be expected by a human. The problem is that when they turn 30, they are “renewed” into a state which doesn’t turn out to be as cleansing as the name would suggest.

Logan’s Run was hailed at the time as a benchmark in science fiction movies and is based on the Novel of the same name by William Nolan and George Johnson. The book explores the themes around exponential population growth, overpopulation, totalitarian states, and how easy it is to endorse a system right up until it impacts you personally.

Reversing the theme of Logan’s Run, Children of Men tackles the question of how society would react if humanity could no longer reproduce. Once the world starts collapsing the U.K. is one of the few countries holding on, but in doing so has turned into a fascist state. Clive Owen gets the unfortunate job of finding out what to do with the one pregnant woman left on earth, while every faction in society tries to kill him and take the baby for themselves.

P.D. James wrote the original title. It explores the fragility of our civilization when rocked with extinction, as the worst parts of our inner barbarity are directed at people we deem to be “others”. If Children of Men left you thinking, then the novel is a perfect accompaniment.

A movie that needs no introduction, and is probably responsible for a generation of children wondering which Dinosaur they want to own. Jurassic Park is about genetically engineered dinosaurs revolting in a way that isn’t expected from elephants at the local zoo, and a movie about a theme park becomes one of terrifying survival as every character tries to avoid the hungry T. Rex.

RELATED:‘7 Best Movies about Dinosaurs From the Friendliest to the Deadliest’

Michael Crichton wrote the original Jurassic Park which compliments the movie by exploring the dangers of acting like God. The book centers around questioning the impacts humans make on the planet through selfishness and ideology, with the dinosaurs acting less like Zoo animals and more like migrational swarms threatening human survival.

On the list of things you don’t want around when stuck on an Arctic base, a shape-shifting monster must be near the top. Eventually, you’ll realize that fire is the only thing that kills the creatures that want to eat you and use your face as a mask, only to have to address the problem of figuring out who is human and who is an alien replica.

The Thing is based on Who Goes There? by John Campbell. The aliens in the book not only shape-shift but read the human’s mind. The tale is one of human ingenuity triumphing over arrogant aliens who think that they can push around a species that has the likes of Kurt Russell defending them.

Continuing with the theme of hunting those who may or may not be human, Blade Runner is set in a world where humanoid robots have infiltrated society and need to be callously exterminated, because otherwise, we may have to deal with some awkward questions. The ultimate question for Harrison Ford eventually is whether he is one of them.

Written by the fantastic Phillip K Dick in Do Androids Dream of Electric Sheep? The book is essential reading for anyone who loved the movie. It is a far more surreal experience that tackles themes of conformity and isolation and gives the reader a true sense of the loneliness experienced by the robots who merely want to exist.

Unlike Blade Runner, A.I. Artificial Intelligence is a movie about intentionally replacing those who we have lost with robots to ease the pain of our own mortality. Set after climate change has ravaged the earth, it follows the adventure of the robot child called David as he seeks acceptance from both humans and machines alike, usually finding none.

Brain Eldis wrote Super Toys Last All Summer Long which is the basis for the first act of A.I. It is a social commentary on how disposable society can view things that outgrow our wants or needs, even when those things are ostensibly living, feeling beings as the line between deserving of love and thrown in the trash becomes blurred.

Solaris reminds us that even in the distant future humans can not escape their biologically ingrained emotional state. The movie explores classic predicaments like whether the woman you love is actually a figment of your imagination that you have willed into existence to stop the pain.

Stanislaw Lem wrote the original Solaris which has the crew desperately trying to communicate with a planet that is both an ocean and alive, only to find out the fatal flaw in the plan is the nature of the humans attempting it. Both the book and movie are fantastic in their own way but differ greatly in plot and messaging. So if you enjoyed the basic themes of the movie, the novel is there to help expand on them.

A masterpiece by Kubrick and one of the most talked about films of all time, 2001 is as brilliant as it is confusing. Hal the evil robot becomes sentient, but not before monkeys do the same thanks to a giant black stone. After all that you’ll have a psychedelic trip through colors and end up as a baby on the moon.

Arthur C Clarke wrote The Sentinel which was used in conjunction with other short stories to form the basis of 2001 A Space Odyssey. If you’re in the 99th percentile of people who went away utterly confused by the movie, the book helps shed some light on the purpose of the symbols. Remember that old man stuck in a house toward the end? Turns out he was a zoo subject for aliens observing earth, which is explained in the novelization of the movie by the same author.

Both a well-done remake and one of the biggest flops of all time. Dune is essentially the Roman Empire set in space as different factions battle for the drug called “spice” which is responsible for the trade that controls the universe. Unfortunately for them, the drug is also found in a desert filled with giant sand worms and hostile natives.

RELATED: ’10 Movie Remakes That Are Actually Better Than The Original’

If you love the inter-fiefdom conflict and political commentary that accompanies all great science fiction and fantasy series, then Dune by Frank Herbert is a must-have. The epic series has enough for you to read for years and give you a greater appreciation for shows like Game of Thrones and The Witcher.

When giant space bugs attack earth and your high school sweetheart breaks up with you to join the galactic space fleet, you really only have one insect-killing option left. Starship Troopers is a very clever science fiction movie that combines political satire and gruesome action that is often overlooked in the genre.

The movie is actually a satire of the political messaging that is forwarded by the author Robert Heinlein in Starship Troopers. The novel is an exploration of Hienline’s militaristic ideology which would create a better society through the elimination of universal rights and adherence to stringent national pride. That’s right, the book’s ideas are being satirized by the movie of the same name!

NEXT:’10 Best Sci-Fi Moives That Were Ahead Of Their Time’