The games market will generate $184.4 billion in 2022, with mobile leading the w | Pocket Gamer.biz 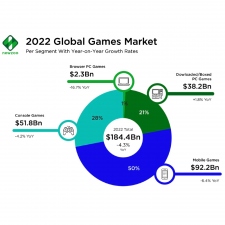 It’s the end of the year and a new report neatly sums up the gaming market’s success throughout 2022.

Newzoo estimates that the industry will generate $184.4 billion in 2022, a decline of 4.3 percent compared to 2021, Marking the first year-on-year decrease since the company first started tracking the industry’s global revenue. While this number its significant, it’s worth noting that the pandemic saw an unprecedented boom in the market, and 2022 has seen numerous companies see decreasing revenue due to the normalisation of the market.

Falling in line with previous projections, mobile gaming will generate $92.2 billion, 50 percent of the revenue generated across the entire market. Despite making up a larger proportion of the market than ever before, total revenue will decline 6.4 percent compared to 2021. This marks a larger fall than the console market (4.2 percent) but sees decline trail browser PC games, which fell 16.7 percent to $2.3 billion.

There are several factors in the decline of mobile gaming, with Newzoo citing a loss of disposable income due to the recession as one. At Pocketgamer.biz we believe there are two notable factors: The changes to IDFA regulations, and the contraction of the Chinese market.

The updated IDFA regulations have fundamentally changed how mobile games are marketed. This has come as a severe blow to the mobile market, notably the hypercasual genre, and decreased user acquisition across the mobile market.

China, while remaining the largest market for mobile gaming in the world, has seen a tumultuous period. A lengthy hiatus imposed on new game licensing beginning in July 2021 saw no new games released until April 2022, while new restrictions resulted in young gamers being restricted to just three hours of playtime a week. The Chinese mobile market recorded a 19.1 percent quarter-on-quarter decline on October 25, while Niko Partners forecast a 5.5 percent year-on-year decline in 2022, the first decline in two decades.

A signifier of China’s place in the mobile market is one company: Tencent. The company recorded its first quarterly loss since listing in 2004 and, while it remains the world’s most profitable gaming company, it lost its status as China’s biggest company.

Out of all the various platforms, only boxed and downloaded PC games saw an increase in year-on-year revenue, rising 1.8 percent to $38.2 billion, representing 21 percent of the market.

“2022 was a tumultuous year, with two successive downward corrections to our 2022 forecast to land at our current forecast of $184.4 billion generated by 3.2 billion players across the globe,” said Newzoo market lead Tianyi Gu. “We see 2022 as a corrective year following two years of lockdown-fueled growth for the market. Looking back at our pre-pandemic forecast for the games market (from January 2020), revenues in 2020 and 2021 were much higher than we anticipated, while 2022 is slightly lower. This revised forecast may seem like a setback for the games market, but the sum of revenues generated from 2020 to 2022 is almost $43 billion higher than we originally forecasted pre-pandemic.”

Newzoo predicts that despite the market’s decline in 2022, the industry will bounce back and begin to rise again, hitting $211.2 billion by 2025. Mobile gaming will continue to be the most profitable sector of the industry, generating $103.1 billion, or 48.8 percent of the total. This decline in the overall percentages could be due to several factors, such as the rise of competing platforms: VR gaming is set to increase at a 44 percent compound annual growth rate, hitting $3.2 billion by 2024, while cloud gaming is projected to generate $8.2 billion by 2025. It is worth noting, however, that both VR and cloud gaming have a place in the mobile world, with a rise in cloud-based gaming bringing AAA games to mobile platforms like never before.

Earlier this year, Newzoo predicted that 48 percent of all gaming revenue in 2022 would come from the Asia Pacific region.