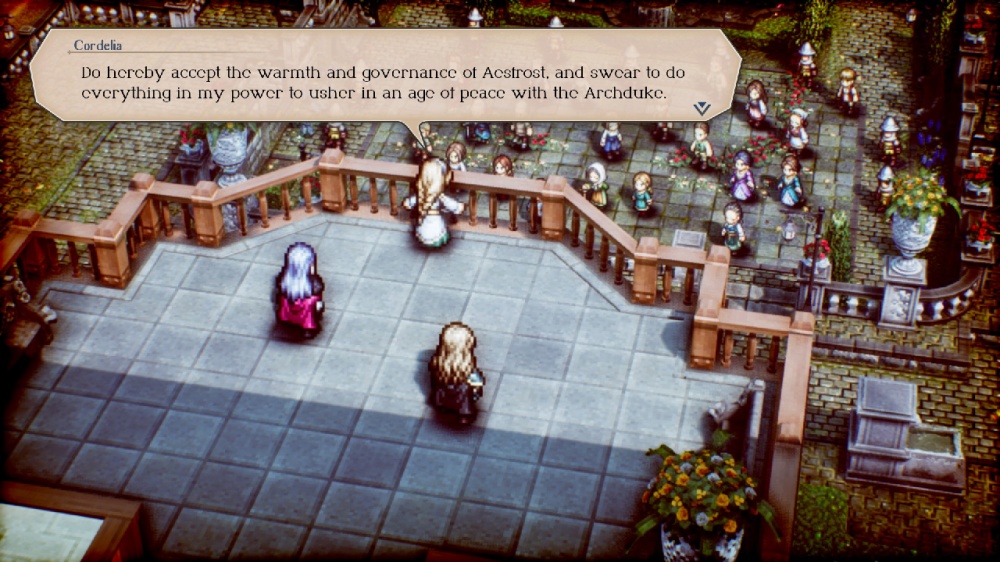 Hello gentle readers, and welcome to our final special edition for the year of 2022. Today we’ve got our list of our very favorite Nintendo Switch games of the year. Please note that I’ve opted to mostly highlight games not covered by Mikhail in his list of the best Nintendo Switch ports of 2022, so do consider that a companion piece to this one. As usual, these games are all picked by me. If you have a different list or have things in a different order than I do, I’d say that is about the most normal thing in the world. I encourage you to share your favorites in the comments so that we can all find some fun games to play. With that said, let’s get to my choices!

Although Triangle Strategy might not be the second coming of Final Fantasy Tactics that some were hoping for, it’s an excellent entry into the tactical RPG genre that should have players enraptured for dozens of hours. Just be prepared to spend an awful lot of time with characters who have a tendency to talk too much and say too little. The plot itself is intriguing enough and the gameplay mechanics compelling enough to keep you coming back, and it certainly scratches the itch for that mix of political struggles and math battles that Square Enix seems to be so good at creating.

Who could have guessed at the beginning of the year that this little spin-off would end up more than holding its own against a full mainline entry? I’ll be honest with all you: despite the considerable technical issues plaguing Pokemon Scarlet and Violet, I absolutely loved those games. But in the end, I have to give the nod to Pokemon Legends: Arceus for its fascinating new perspective on the world of Pokemon and relatively polished presentation. A very fine RPG adventure.

There were a lot of excellent collections released on the Nintendo Switch this year, but none of them quite exemplified the idea of a historical archive as well as Atari 50: The Anniversary Celebration. Sure, you’ve got more than 100 games to play here ranging from the oft-seen Atari 2600 to the first-time reissued Atari Jaguar. Even some brand-new spins on some of the beloved classics. But setting aside the games (what?), there’s an outstanding museum here that tells the story of Atari from its meteoric rise to its explosive crash, with all the interviews, extra materials, and tidbits you’d expect to see in a real museum. An amazing achievement and must-have for fans of gaming history, and a genuine dream come true for Atari fans.

It’s perhaps no surprise that the follow-up to the excellent Mario + Rabbids: Kingdom Battle is also great. This one goes beyond the first game in many ways, with new gameplay twists, a highly enjoyable campaign, and some actual laugh-out-loud humor. If you enjoyed turn-based strategy games like XCOM or Fire Emblem and want something with a lighter tone, you can’t miss with Sparks of Hope.

While Bayonetta 3 may not reach the same level of consistent quality as the original, it offers the same style of over-the-top action and bonkers story-telling that characterizes this franchise. Capitalizing on the recent trend of parallel worlds, it sees Bayonetta facing the biggest threat she’s seen yet. That’s saying something when you consider the last two games. A new playable character, new mechanics, and some of the most impressive set pieces ever seen in this kind of game make Bayonetta 3 one to get for any Switch owner who craves a good dust-up.

While Splatoon 3 is more of an evolution than a revolution, it adds enough new things to liven things up for veteran players while also being the new de facto point of entry for new players. I’m not really sure where Nintendo can take the series from here, but I suppose that’s a problem for a couple of years from now after the team has done its thing updating this game. For now, I think we all have enough room in our lives for another helping of colorful, charming, ink-flinging action. A great new chapter in a fantastic series. See you in the next Splatfest!

Capcom could have left Monster Hunter Rise alone and it would have still been one of the finest games on the Nintendo Switch. But no, they just had to go and add an incredible expansion packed to the brim with new things to do, kill, and wear. It easily doubles the amount of gameplay you’ll get from the game, and considering just how much there was in the base game that is really saying something. Heck, it’s the only piece of 2022 downloadable content that is so undeniably good that I had to include it in this list. If you like Monster Hunter, you need this.

Xenoblade Chronicles 3 is every bit as mechanically dense and massive as the second game, if not more so, but thematically and stylistically it feels like a return to the feel of the first game. It serves as a fine cap to the three numbered games in the series, with an epic story, a cool world to explore, and tons of side-missions to engage in. A fantastic game to get lost in, and one of the very finest role-playing games you can pick up for your Nintendo Switch.

Kirby takes his first waddling steps into 3D, and it turns out Kirby takes to the third dimension quite well. Explore a brand new world and use Kirby’s new Mouthful mode to do some truly horrifying things. I mean, horrifying in a cute way, but still. As is always the case with Kirby games, you can make this one as chill or intense as you like depending on how you approach things. I can genuinely say that I haven’t had such a good time playing a game from start to finish as I did with Kirby and the Forgotten Land in quite some time. It put a grin on my face from the start, and it kept me happily engaged to the very last drop.

And that’s the list, friends. I’d love to see your picks and favorites from the year 2022. Go ahead and post them in the comments so we can all share in your joy. I suppose that leaves at the end of the year, doesn’t it? I hope next year will be a better one for everyone. Maybe we’ll even see Sword of Fargoal 2? Haha, just kidding. Have a Happy New Year, and see you on the other side!