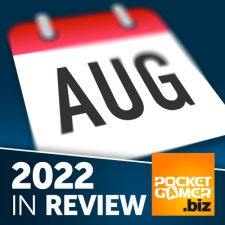 2022 was a year of big news and even bigger industry movements. Mobile gaming was no different. Here’s the stories that set the scene back in August 2022.

Whilst Diablo Immortal was not warmly received when first announced, perhaps due to differing expectations, it seems to have been an overall boon for the company. Activision-Blizzard reported that mobile gaming had outpaced both PC and console as their main source of revenue, in a stunning turn for a company half of which made their name with the MMORPG genre.

Later in the year we’d see their financials for Q4 confirm this as both Activision-Blizzard and Take-Two Interactive went mobile-first for the first time in their history. We broke down just how significant this was and how we felt it would change the market in a feature right here.

Netflix Games has faced an uphill battle for most of its lifetime, and the main problem has been a lack of knowledge about the feature itself. Although this part of the subscription contains many hit indie classics, it still hasn’t managed to break through a slim minority of viewers and into the wider audience that the streaming giant boasts.

Netflix haven’t given up on their dreams of gaming success however, and have continued to invest not only in new games but in opening up their own studio. Releases such as Desta: The Memories Between have shown that great and visually appealing games can come from partnering with Netflix.

Tencent took a beating as it showed off its first quarterly losses since 2004. A mixture of Covid-19 and the continuing lockdowns imposed by the Chinese government in pursuit of ‘zero covid’ meant that it and many other companies in the world’s largest mobile market have been facing trouble.

Tencent have long been a major force in the games industry both domestically and abroad. Their reach and investment into foreign companies has seen them grab stakes in companies such as Riot Games, capitalising on many emerging markets. However, it hasn’t helped in weathering an unexpected storm of regulations and restrictions.

The Activision-Blizzard acquisition was still moving along smoothly back in August. There was not much sign of the trouble that was to come later in the year from regulator scrutiny and more. There was of course an expectation that the acquisition would be looked into closely, however this month saw the first approval by regulators.

The Saudi Arabian Competition Authority approved the Microsoft acquisition of Activision-Blizzard, offering a green light to the move. It was a seeming sign of good things for this deal, however as we’ll later find out, it would be far from smooth sailing.

August 2022 saw Supercell shelve their spin-off from Clash of Clans, Clash Quest. The puzzle based spin-off had been developed by Space Ape Games who have been developing a number of spin-offs for the company.

Supercell, despite their flat corporate structure and efforts to promote a positive workplace, have been known to be ruthless with their new games. In some respects this is understandable, as it means the team is never overstretched in terms of focus. However, it can result in potential gems being dumped for not being massive successes as their flagship games like Clash of Clans are.

Do you have a favourite mobile story from 2022? Take to Twitter with the hashtag #PocketGamerYearInReview to tell us your highs and lows of the year.

Want more? Get our pick of the best stories in September here.