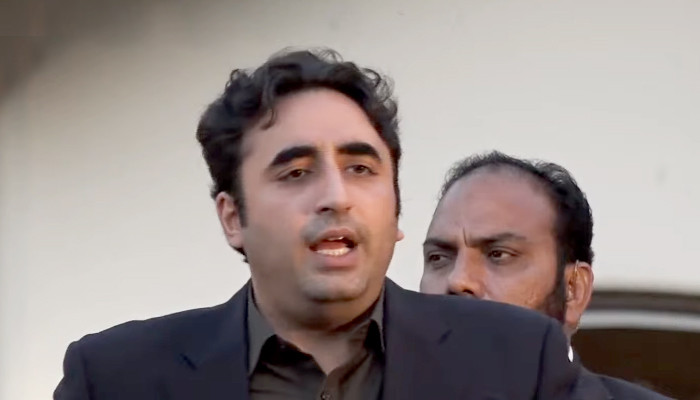 Addressing workers of the Pakistan Peoples Party (PPP) in Karachi, Bilawal said: “Terrorists involved in the Army Public School (APS) attack got released from prison and are now giving lectures in Turkiye.”

Without taking names, Bilawal spoke about Ehsanullah Ehsan — former spokesperson of the banned Tehreek-e-Taliban Pakistan (TTP) — and stated that the culprits of the APS attack fled abroad during Khan’s tenure.

In February 2020, Ehsan claimed in an audio message circulating on social media that he was no longer in the state’s custody and has managed to “escape”. A few days later, the development was confirmed by then-interior minister Ijaz Shah, who admitted Ehsan’s escape.

“Those who referred to us as an imported government, in fact, imported terrorism. Imran Khan released terrorists from jails,” Bilawal said.

The foreign minister questioned how national security can be compromised. “We fought terrorists in the past and are still ready to fight terrorism. We will defeat terrorists,” the minister said, underlining that Pakistan will succeed against terrorists despite the lack of resources.

Censuring the deposed prime minister for being an apologist of terrorism, the foreign minister said that Khan made a deal on the martyr’s blood.

“There will be no compromise on Pakistan’s security. We will defeat terrorists and bring peace,” FM Bilawal said.

The foreign minister said that Khan pushed Pakistan towards default. “Imran khan will be accounted for the biggest sin,” he said.

The minister, when speaking about the recent spate of terror attacks in the country, said that the PPP government in the past did not only fight against terrorism but also defeated it.

He reminded attendees of the event about the mission to take down terrorists in Pakistan of his mother and former prime minister Benazir Bhutto — whose death anniversary was commemorated a few days ago.

Pakistan saw as many as 376 terror attacks in the last year, resulting in increased casualties in the Khyber Pakhtunkhwa (KP) and Balochistan provinces, while December turned out to be the deadliest month for the country.

In its annual report released today, the Center for Research and Security Studies (CRSS), stated that a majority of these attacks were claimed by banned terror outfits such as TTP, Daesh, and the Balochistan Liberation Army (BLA).

As a whole, KP experienced an exponential rise in violence while the fatalities also remained higher. Those who lost their lives in these attacks included civilians (also foreigners), government officials, and security personnel.

CRSS said that an unprecedented spate of terrorism ensued in KP and Balochistan after November 28, with over two dozen attacks in the month of December alone.

The ratio of fatalities in the province alone rose up to nearly 64%, followed by Balochistan which suffered 26% of terror-related deaths, the report claimed.