Did Trump Just Threaten a Third Party Run to Split the GOP? 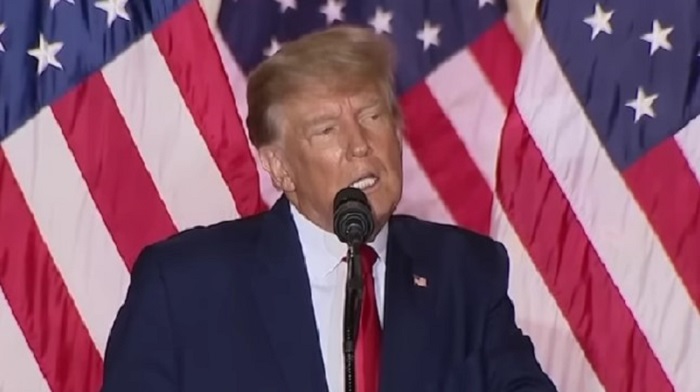 Former President Donald Trump shared a column on his Truth Social media platform suggesting a “coming split” in the Republican Party and discussing the possibility of him running as a third party candidate in 2024.

The article argues that the GOP “has no intention of letting us choose Trump again” because he refuses to toe the line.

“What should we do when a majority of Republicans want Trump, but the Republican Party says we can’t have him?” the author asks.

Trump shared the post with his followers on Wednesday, but uncharacteristically offered no commentary, leaving many to speculate if he were hinting at being a participant in the GOP split.

In the end, the columnist, Dan Gelernter, suggests a third party run for Trump would not ultimately lead to victory.

How many Republican voters feel the same way, especially after they were once again abandoned and insulted by a GOP Senate that just gave the entire kingdom to the Democrats?

Would Trump Actually Run Third Party and Tear Down the GOP as We Know It?

Trump has threatened to run third party in the past and is likely teasing such a scenario as a means to gain leverage within the Republican Party.

He briefly explored running for the Reform Party nomination in 2000 and, according to a book titled Betrayal: The Final Act of the Trump Show, threatened to leave the GOP due to a lack of support at the end of his presidency.

Republican National Committee chair Ronna McDaniel allegedly responded, “You cannot do that — if you do, we will lose forever.”

“Exactly — you lose forever without me. I don’t care,” Trump supposedly replied at the time. “This is what Republicans deserve for not sticking up for me.”

Trump will most likely be the Republican nominee. If for some reason he isn’t the GOP nominee I doubt he would run third party because would hand Biden his reelection bid in 2024. https://t.co/RaeGIA4NOq

The former President has the backing of millions of American voters and would almost certainly win some states in a three-way contest if say, somebody like Florida Governor Ron DeSantis received the GOP nomination.

It would surely lead to a Biden victory in 2024 by splitting Republican voters. Or would it?

The Political Insider reported earlier this month on a group called ‘Third Way’ which released a report analyzing the “dangerous illusion of a Presidential Third Party in 2024.”

The bulk of their analysis discussed a progressive candidate jumping into the fray to counter another term for the elderly Joe Biden.

But, as mentioned above, chaos can start if Trump was the third party guy and he started to actually capture electoral votes in deep red states.

“If a third-party candidate blew past historic precedent and managed to win enough Electoral Votes to keep any candidate from getting to 270, then the outcome would be decided in the House of Representatives, which is controlled by Republicans and where Donald Trump would prevail,” Third Way claims.

That latter part is absolutely not set in stone, as anyone who has followed the GOP for the last 6 years can easily discern.

.@aliza_astrow reviews the history + data showing third-party candidacies for the WH don’t win. But they can be a spoiler.

The most successful third-party candidacy possible would deny any candidate 270 EVs, throwing the election to House Republicans.https://t.co/9WrDMzvOAA

The argument has another major flaw – The House would likely be a microcosm of the national vote, with Democrats surely voting for Biden and the rest splitting their vote between DeSantis and Trump.

With a razor-thin Republican majority in the House, the vote would likely deliver a victory for the current President.

“Anyone backing a third-party candidate should be clear-eyed: they are not establishing a new political faction, because their candidate is not going to win,” Third Way opines.

“Rather, they are creating a spoiler who will help elect Donald Trump.”

Is Trump preparing for the “coming split” or was he simply sharing an article out of curiosity? What do our readers think?