Deachman: Ottawa is the city that fun forgot? Hardly! 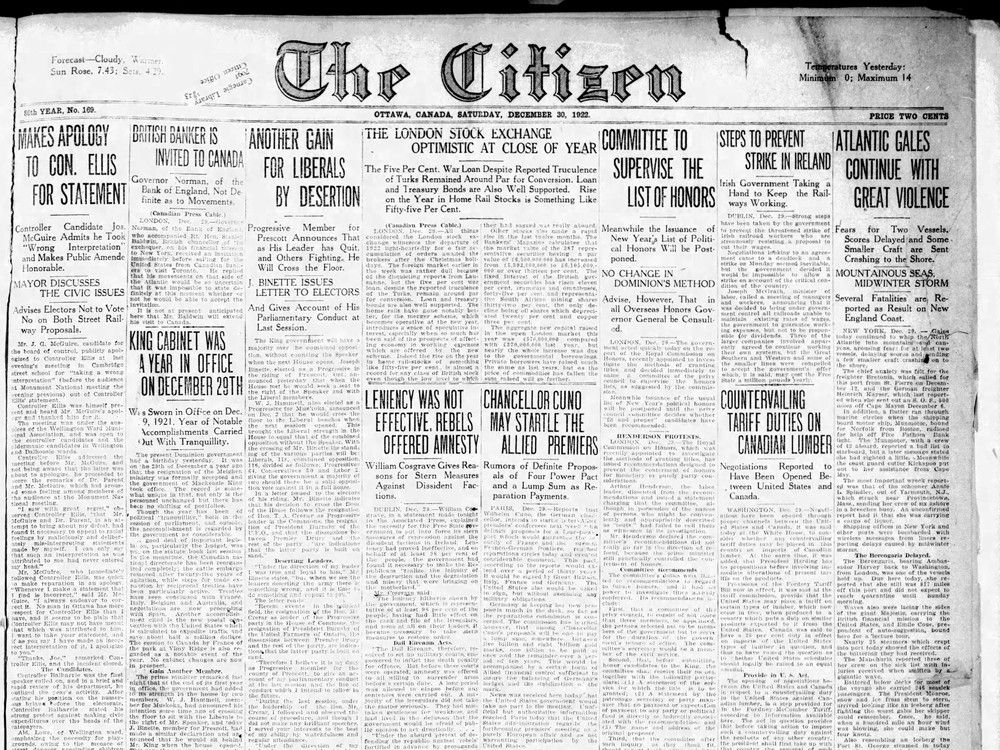 On the last Saturday of 1922, with a New Year’s Day municipal election only two days away, Ottawa Citizen readers learned of an all-candidates meeting at Cambridge Street School the night before, where board of control candidate Joseph McGuire apologized to incumbent Arthur Ellis for wrongfully misconstruing Ellis’s remarks as racist. Alderman Erenest Lowe, meanwhile, urged voters to support a ballot plebiscite that would see $50,000 spent on building city parks, citing, in the Citizen’s words, the “menace of street dangers precluding children from playing on the streets.” (Voters, incidentally, were OK with the menace, rejecting the proposal by a 60-40 margin). Mayor Frank Plant, running unopposed, assured voters that “sound financing was in vogue at the city hall.”

Seriously, how could anyone refer to Ottawa as the city that fun forgot?

Most eye-catching, however, was the story’s closing paragraph: “At eleven p.m., the janitor had instructions to turn off the lights, so the meeting terminated at that hour.”

The Citizen also published a list of its preferred candidates and plebiscite outcomes (we were in favour of playground spending) for readers to cut out for handy reference.

But the election was hardly the only searing news of the day. Federally, two MPs crossed the floor to join Mackenzie King’s ruling Liberals, giving them a majority. It had been exactly a year since King took over the House, which the Citizen noted was a “Year of Notable Accomplishments Carried Out With Tranquillity.” (Yes, two Ls.)

Readers learned of other developments in the news, including:

And these were all on the front page. The paper wasn’t big — just 10 pages for two cents (increasing to three cents the following week) — but it was jam-packed.

I love reading old papers, for the local news and advertisements especially, which hint at the habits and peregrinations of Ottawans in the times of our parents, grandparents and great-grandparents. Women often had only their husbands’ names to go by, prefaced by a “Mrs.”, and men often had no first names at all, and just about everyone’s addresses were published. They were people just like us, but from a time very unlike ours, and it’s fun to piece together an approximation of their lives through the newspaper.

Would I be upset that Mayor Plant was running unopposed? Would I support the $75,000 also on the ballot to build a municipal abattoir? Was I going out that night, maybe to the palatial Loews theater at the corner of Bank and Queen streets, where 35 cents would gain me a balcony seat to watch the film Quincy Adams Sawyer, along with Buster Keaton’s The Playhouse short and five vaudeville acts? Or might I have headed to The Arena instead, on the current site of Confederation Park, where the Ottawa Senators, on their way to another Stanley Cup title, were hosting the Hamilton Tigers?

Did I need a new shirt? They were on sale for $2.98 at Bryson-Graham department store on O’Connor Street, where I could also pick up a two-pound bowl of plum pudding for a dollar. Do I even like plum pudding? What is plum pudding? And is THIS the year I finally buy a pet canary for six dollars?

But then a personal ad catches my imagination, and all these other thoughts dissolve for the moment: “Andrew Stafford can find his mother at 84 Aberdeen St., Eastview.”

That enticing mystery’s allure is short-lived as I am swallowed whole by the prose in a story announcing the death of beloved Ottawa Curling Club member George S. May, whose expiration followed a heart attack suffered while curling. “Dr. MacLaren, of MacLaren street, was at the rink when Mr. May was stricken and did everything possible,” the Citizen reported, “but the unfortunate curler was beyond earthly aid.”

Sometimes, it is a single sentence that strikes a chord, like this solitary quote from a five-and-dime jewel thief who, in 1922, was being fingerprinted, which would identify him as being on the lam from an Indiana jail: “I guess I’m done.” Or the image created by this lede, a decade later: “William J. Laroque and Emmanuel Lavictoire of Rockland, convicted and sentenced to be hanged for the murder of Leo Bergeron last March, literally cried themselves to sleep tonight.”

“Beauty of Ottawa Surprises Visitor,” is one of my favourite headlines, but it doesn’t compare to this 1932 statement of the obvious: “Leader Of Riot At Penitentiary Has Bad Record.” Or how about this one, from 1962: “Safety Week Sets High Death Mark,” the story placed alongside an ad for Radmore Stewart funeral home.

Advertisements, too, occasionally crossed over into editorial matters, as was the case in 1912 when Coca-Cola assured readers that it did NOT use Ottawa city water in its products.

In 1972, we covered the Ottawa Boys’ Club bubble gum blowing contest. In 1952, during the Cold War, we published an artist’s impression of what Ottawa might look like following an “atom attack.” Five years earlier, we reported on the winners of a High School of Commerce posture contest.

The city that fun forgot? Where have YOU been all this time?