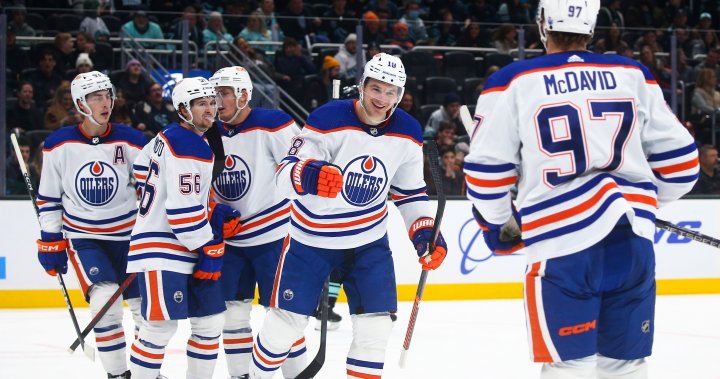 Connor McDavid had a goal and four assists as the Edmonton Oilers routed the Seattle Kraken 7-2 Friday night.

“I certainly like making plays and setting guys up, but I think it’s something I’ve learned throughout my career is you’ve got to be a little bit selfish,” McDavid said after the game. ” With the goal there I probably could have slid it over to ‘Hy’, but I take the shot myself, so there’s times to set your guys up and times to call your own number and I’m definitely learning that.”

McDavid has a 17-game point streak, tying a career high. He has 37 points during the streak.

The Oilers jumped all over the Kraken, scoring three times in a span of 1:10 before the game was four minutes old.

Zach Hyman tapped in a power-play feed from McDavid. Klim Kostin put a backhand under the crossbar and in. Darnell Nurse beat Philipp Grubauer blocker side, chasing the Seattle goalie from the game after allowing three goals on five shots. Jesse Puljujarvi beat new keeper Martin Jones at the halfway point of the first to make it 4-0.

Daniel Sprong put Seattle on the board not long after.

Kostin replied with a deflection of a Nurse point shot, then Hyman scored again on the power play.

Brandon Tanev got one back for the Kraken. It was 6-2 Oilers after two.

In the third, McDavid beat Jones five-hole for his 32nd.

“We had 20 players pulling on the same rope tonight,” Oilers head coach Jay Woodcroft said. “We were able to assert the game we wanted to play right off the bat. Put the other team on the back foot; we took the game to them and that allowed us to settle into the game and play the game we wanted. So, it’s a credit to our players and their level of execution, especially right off the bat.”