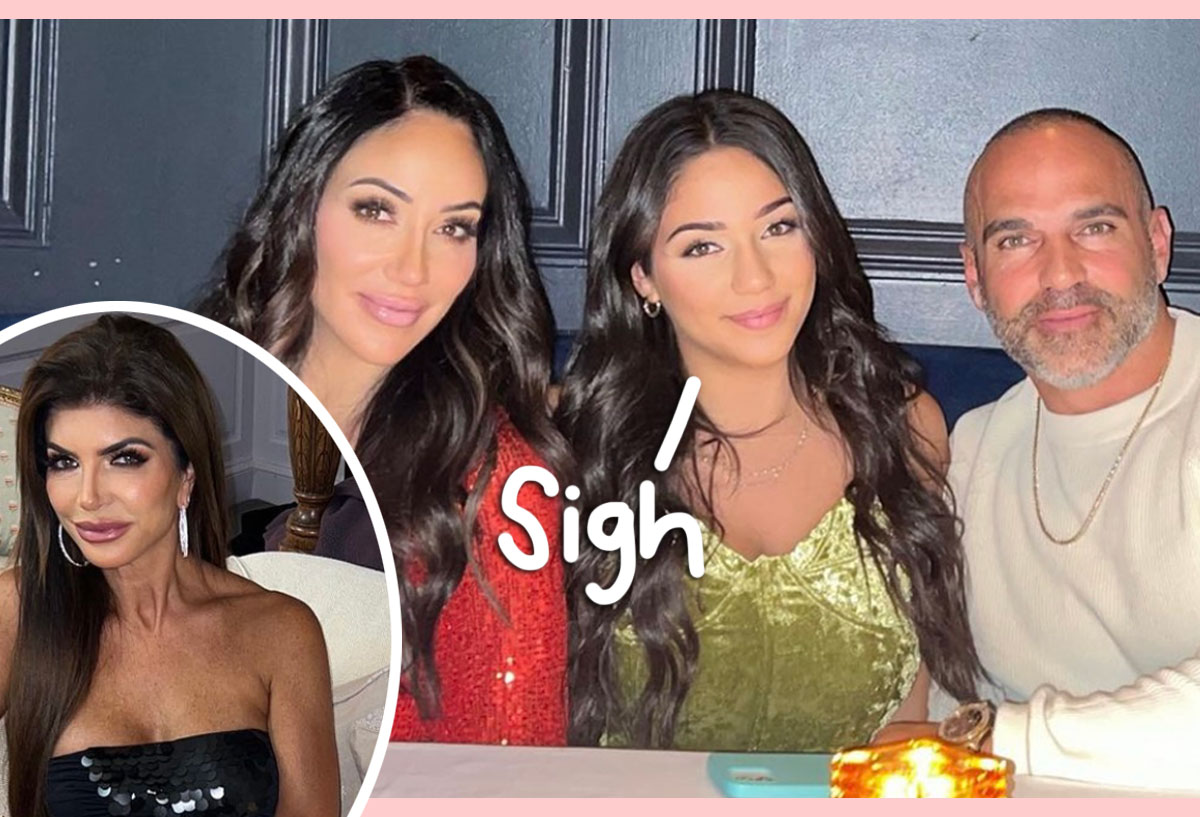 Melissa and Joe Gorga’s daughter Antonia is finally reacting to the family’s ongoing feud with the Giudices!

As we’ve been reporting, Joe and his sister Teresa Giudice have been fighting for several months now, and lately, things got so intense, Teresa’s daughters, Gia, 21, and Milania, 16, unfollowed their uncle and aunt from social media! Which, you know, definitely draws a line in the sand between all the family members!

Now, one month after the dramatic unfollowing, Melissa is opening up about how her own daughter is dealing with the drama — and the answer might surprise you!

In a new episode of her podcast Melissa Gorga On Display out last Thursday, the reality star remarked how it’s “so crazy” her 17-year-old daughter can remain “drama fee” amid the s**t storm! While she didn’t call out Teresa by name, she did dish:

“Like, she almost giggles at drama [and] laughs at me. She’ll be like, ‘Oh, Mom, please.’ Like, she’s unfazed by the fact that even, you know, her cousins unfollowed her parents on Instagram. She just is like, ‘You know what, Mom? Not your problem, theirs.’”

Whoa! So mature of her! She must be super used to drama if she’s so carefree about it! The Real Housewives of New Jersey star then went on to give herself credit for how “unfazed” her mini-me is, adding:

“I think she gets it from me.”

“I think she’s also watched certain situations and things that I’ve been through too, and how I’ve handled them and the calmness in the room instead of the chaotic-ness.”

Yet the Love Italian Style author found herself in the middle of a very heated fight, so… has she really been the best example of finding “calmness in the room”? We’re not so sure. Just saying!

Related: Savannah Chrisley’s ‘Grieving The Loss Of Parents That Are Still Alive’

While Melissa didn’t open up about the ongoing controversy with Teresa and her husband Luis Ruelas in the rest of the podcast episode, she did tell Us Weekly earlier this month that she hopes season 13 of RHONJ will help smooth things over, explaining:

“I always hope it’s gonna help and I truly do from all angles. But sometimes it doesn’t because we end up on that couch in the reunion wanting to go crazy.”

For her part, Teresa began watching old seasons of the reality series for the first time earlier this year to catch up on all the drama and “educate” herself on what’s been going on with Joe and Melissa in the series. She told People:

Uh oh. Doesn’t seem like the couples should be relying on the show to help them find common ground – there’s way too much baggage there! As Perezcious readers know, things have been tense between the in-laws since they had a huge spat on the RHONJ reunion show. Then things grew worse in August when Melissa and Joe skipped out on Teresa and Luis’ wedding! Flash forward a few months to October’s BravoCon and things were still incredibly awkward as the women refused to interact with one another — even when they were in the SAME ROOM. Jeez.

After not spending Christmas together and with no plans to ring in the New Year side-by-side, it seems like the two families have officially been torn apart. Hopefully not for good… It’s certainly interesting to see how the different daughters are reacting to their parents’ argument! What would U do in this situation? Laugh it off like Antonia or unfollow like Gia and Milania? SOUND OFF (below)!