HomeVideoKen Russell's The Devils Is a Controversial Horror Masterpiece
Video

Ken Russell’s The Devils Is a Controversial Horror Masterpiece 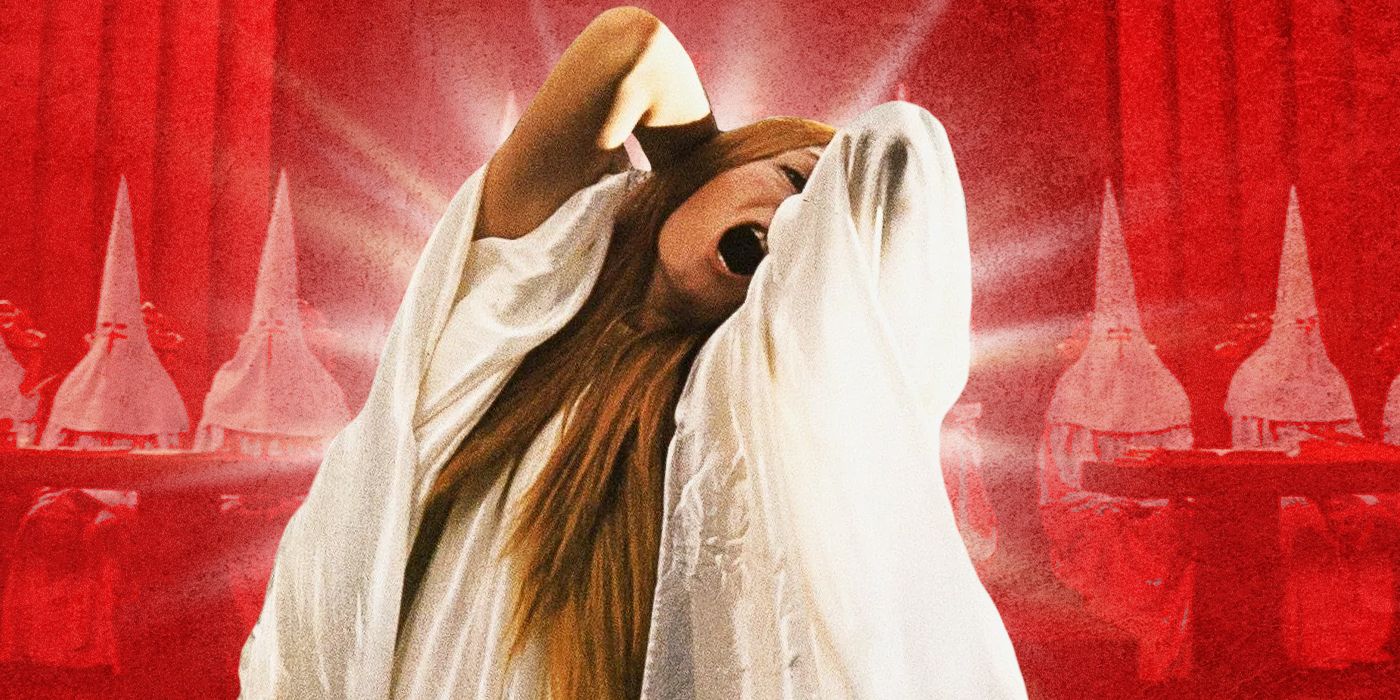 A full two years before The Exorcist hit cinemas in 1973 and pushed the boundaries for what contemporary audiences could stomach as far as horror about sex and Catholicism was concerned, British film director Ken Russell released one of the most controversial movies of all time in the form of The Devils. However, while The Exorcist was quickly heralded as one of the greatest films of all time, becoming the first horror film to be nominated for the Academy Award for Best Picture, The Devils was quietly swept under the rug, becoming banned in several countries and remaining so until the early 21st century. There’s a reason that the film doesn’t consistently top lists of the best religious horror movies: it’s a nightmare to simply try and find.

Watching the film, the reasons for its X rating and censorship at the time of its release become wildly apparent. The fact that a major studio like Warner Bros. would invest in an ultra-graphic film about a 17th-century priest accused of inciting a demonic sexual frenzy among a convent of nuns shows an immense level of corporate bravery from the distributor even if audiences ultimately weren’t ready for it. But in a year that brought us A Clockwork Orange and Straw Dogs, what was it about The Devils that proved so irredeemable and so enduring at the same time?

A true story adapted from both Aldous Huxley’s non-fiction book The Devils of Loudun and John Whiting’s 1960 play, The Devils follows Urban Grandier (Oliver Reed), a popular 17th-century Protestant priest in Loudun, one of the last remaining self-governing cities standing under Louis XIII’s reign over France. While Louis XIII made a promise to the governor of Loudin (deceased at the start of the film, resulting in Grandier’s unofficial rise to power) not to damage the town, Cardinal Richelieu (Christopher Logue) attempts to exploit any angle he can in order to consolidate control over the town in a bid for further political power. While at first, Grandier’s popularity (both on the streets and between the sheets) makes it difficult for the Cardinal to remove him without suspicion, it’s this trait that proves to be his downfall when the envious Sister Jeanne de Anges (Vanessa Redgrave), sexually obsessed with Grandier, accuses him of igniting a sexual frenzy within the convent through black magic. It’s important to note that a number of factors collide in order to achieve this disastrous outcome, those being the repression of the nuns themselves with regard to their lack of hedonistic freedom, Grandier’s aforementioned popularity and his status as the town’s ultimate object of desire, and the Catholic regime’s attempts to consolidate power from Grandier’s more liberal, forward-looking ideals in contrast to Catholic chastity and discipline.

RELATED: The 21 Best Horror Movies of the 1970s: Looking Back at One of Horror’s Best Decades

Though a beautiful woman, Sister Jean’s suffering from a hunchbacked deformity propelled her into life at the nunnery. While some may scoff at this ableist view in connecting Sister Jean’s disability as the cause for her evil actions, it can also be interpreted as a wider comment on society’s view of the disabled, in that it was her physical otherness that resulted in her relinquishment of a normal life, confining her to the nunnery, the only place where she would have been welcomed at the time.

The nuns in The Devils are depicted as entirely isolated from the rest of society, an aspect that Russell conveys by unmistakeably shooting and framing the nunnery like a prison, complete with suffocatingly confined spaces, monotonous interiors, and steels bars through which the nuns can barely slip their fingers through. Even in conversations with those from the outside world such as Cardinal Richelieu, Grandier’s lover Madeline (Gemma Jones), or Grandier himself, the nuns aren’t allowed to even step outside and have their conversations in peace. It’s only through peepholes and restrictive areas that any interactions with or observations of the outside world are maintained. The tight spaces of the nunnery in this case act as a metaphor for their moral rigidity, showcasing not only the effect that it has on the imprisoned but how twistedly it frames their observations of the world outside. In one of the biggest audience shockers of all time which was censored and buried for decades, Sister Jeanne resorts to masturbating through the use of Grandier’s charred femur. The message in this is clear: refusing to acknowledge and thereby repressing any sexual desire within a group of people will only lead to the demonization of sexuality, the likes of which the film will contend has chaotic consequences.

Grandier Is a Forward Thinker In a Conflicted Era

In a conversation with Madeleine, Grandier discusses the concept of chastity in which she states, “St. Paul says that he who marries does a good thing, but he who remains chaste does something better.” Grandier’s super smooth and ultra-slick response: “Then I am content to do a good thing and leave the best to those that can face it.” Aside from showing us why Grandier is the player that he is, the quote also serves to emblematize the film’s themes and ideals. Grandier is not the kind of Catholic priest who judges those who do not conform to his way of life. In fact, he himself does not fully conform to the values of priesthood. He devotes his life to the Church and his religious ideals but interprets them his own way, proving that he is perfectly comfortable in embracing the more devilish, hedonistic side of his life and his vice of sex.

This liberal viewpoint is what makes Grandier such a threat to Cardinal Richelieu and the Catholic regime, the fact that one of their own (a priest) is, through his actions, propagating a new way of life in which the self, not the Church, is the ultimate moral authority under the eyes of God. Grandier, however, is insistent on not imposing his view of life on anyone. In a speech rallying the people of Loudun against the attacks of Cardinal Richelieu, Grandier describes the significance of their walls as a means of both physical defense and maintaining self-governance, something that Richelieu obviously hates. He later goes on to state that “when a man is intent on power as Richelieu is, he can justify his actions with absurdities,” a turning point that likens the film’s events to modern times even 50 years after its creation. It serves to say that power isn’t just about maintaining a place above the rest of society but crushing the rest of society’s contrasting ideals altogether.

‘The Devils’ Isn’t Just a Story About the 17th Century, It’s About Today

Nobody watches a medieval movie and doesn’t think how much it would suck to be alive in that era. However, what’s most frightening about The Devils isn’t its depiction of the terrors of the past, but how much those terrors mirror the present. Grandier’s plight in attempting to guide the world towards a more free-thinking liberal ideal draws stark comparisons to the banning of various ideological taboos throughout the 20th century, whether it be sex, alcohol, tobacco, or more. These allusions to the modern world go beyond Russell’s adaptation of the non-fiction novel and play as they can be found directly in the original source material, in which Huxley specifically compares the exorcism of Sister Jeanne to “rape in a public lavatory.” This line appears to have informed Russell’s decision to frame the nunnery as an all-white, almost unnervingly clean space in contrast to the muck found throughout a plague-ridden Loudun where corpses and filth are more commonplace than the living themselves.

The modern commentary on power and the means through which its consolidated rang true in 1971 when the counterculture was at its peak, as students around the world protested the United States’ militaristic involvement around the world in order to contain the “threat” of communism. It even rings true in 2022, where the landmark Roe v. Wade abortion case can be overturned and decades-old laws can suddenly be upended for the sake of certain political agendas. While not as openly vilified as it was in the 17th century, sex in today’s day and age has become something more politically dangerous than it’s been for decades. While technically a historical drama, if there’s one horror about The Devils, it’s showing how through the repression of any ideals that don’t conform to those of the powers that be, no matter the time or place, lives are always destroyed in the process.

And therein lies a potential answer as to why The Devils is still censored today or at the very least, why a copy of the film is still so difficult to get a hold of. Unlike a slew of popular supernatural religious horror movies such as The Exorcist, the film insists that in spite of appearances, the supernatural has no role to play in the depicted hysteria. There are no floating possessed bodies or twisted demonic voices spouting profanities from the innocent lips of children. Unlike A Clockwork Orange, there are no hyper-stylized interpretations of a morally deviant future that serve to ensure its audience that this is just a film. The Devils rather plainly states that this is a true story. Whether the subject is the sexual repression of nuns or the vilification of abortion in society today, the perpetrators of these evil acts (the political powers that be) remains the same, and therefore, no matter how exaggerated, so do the outcomes. Grandier, subject to the most brutal torture imaginable, refuses to confess to the crimes he has been accused of until the very end, remaining true to himself even in death. In preserving the perception of his innocence to himself he preserves his innocence to the world, presently and historically. All that it takes for good people to spit into the eyes of evil is to do the same.

This Got Me So Emotional!

Maria Menounos Finally Pregnant After ‘A Decade Of Trying Everything’ – And Kim Kardashian Helped??