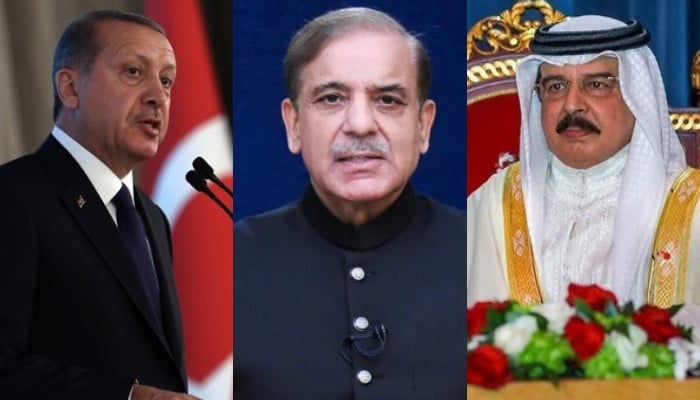 Prime Minister Shehbaz Sharif has invited Turkiye’s President Recep Tayyip Erdogan and Bahrain’s king to an international conference, being co-hosted with the United Nations in Geneva on January 9, 2023 in the wake of recent cataclysmic floods in Pakistan.

An international donors conference is scheduled to be held in Geneva on January 9, 2023, aimed to collect over $16 billion in aid for rehabilitating flood-affected areas in Pakistan.

PM House’s media wing said that PM Shehbaz Sharif extended the invitation to the Turkish leader during a telephonic conversation. He also underscored the importance of continued international support and solidarity for Pakistan’s plans to build back better after devastating floods.

The prime minister highlighted the daunting challenge faced by Pakistan in terms of rehabilitation and reconstruction of the flood-affected areas in a climate-resilient manner.

The prime minister expressed gratitude on behalf of the people and the government of Pakistan to the brotherly government of Turkiye for the provision of prompt humanitarian assistance in the wake of the unprecedented catastrophic floods.

The two leaders also exchanged views on various bilateral matters and international issues and agreed to remain in close contact.

Meanwhile, the premier also held a telephonic conversation with King Hamad Bin Isa Al Khalifa of the Kingdom of Bahrain and invited him at the international conference as well.

During the conversation, King Hamad expressed firm support for the initiatives to strengthen Pakistan’s response during its reconstruction and rehabilitation phase, after the climate-induced floods in the country.

The prime minister underscored the importance Pakistan attached to its cordial and historical relationship with the Kingdom of Bahrain. Both the leaders also expressed satisfaction over the close cooperation between the two countries at multilateral forums.

The king reciprocated the sentiments of the prime minister and reassured the desire of the Bahraini leadership to further deepen and broaden bilateral relations with Pakistan.