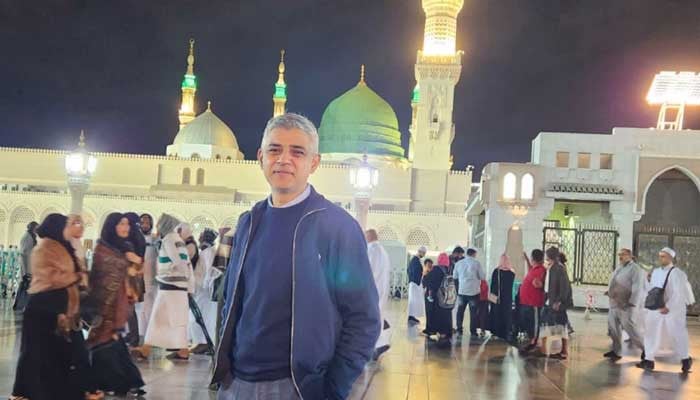 London mayor Sadiq Khan Thursday shared photographs of himself from his visit to Makkah and Madinah — two of Islam’s holiest sites in the world.

Taking to his Twitter, the British-Pakistani mayor posted a photo collage in which he appears to have performed an Umrah bidding farewell to 2022 on a “blessed” note.

In one photograph, the Khan is seen praying with his hands raised in front of the Holy Kaaba in Makkah’s Grand Mosque.

In the other photograph, Khan — former UK Member of Parliament — poses for a photograph standing inside Masjid-e-Nabawi’s courtyard with the Green Dome in the backdrop.

The London mayor, taking to the microblogging site, wrote: “A blessed end to 2022. During this special time for so many families, I am grateful to have been able to visit the holy cities of Mecca and Medina to undertake the Umrah pilgrimage with my family.”

The United Kingdom’s first Muslim mayor ended his tweet by writing about a “wonderful” start to 2023.

Last year in May, the 50-year-old British-Pakistani won the second term and got reelected as mayor of the UK’s largest city beating his rival from the Conservative party Shaun Bailey — winning 55.2% of the popular vote.

Khan, the son of a Pakistani immigrant bus driver, rose from humble roots and took charge of the British capital in 2016.

Ahead of his first stint at the City Hall, the Labour representative beat the Tory candidate and multi-billionaire Zac Goldsmith.