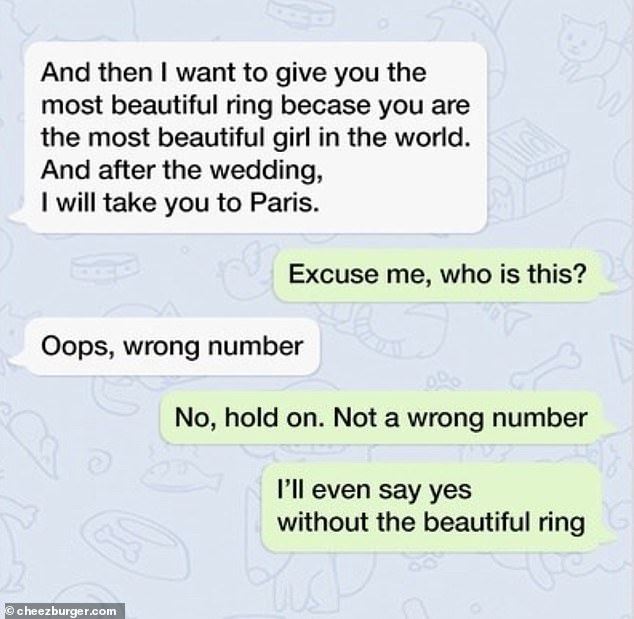 Keep your wit about you! Hilarious snaps reveal clever comebacks to text messages you wish you’d thought of

By Gwyneth Rees for MailOnline

We’re all know the feeling of thinking of a funny comeback hours too late, but that’s not a problem for these quick-witted texters.

Cheezburger.com has rounded up a selection of perfect comebacks sent by people from around the world, including a father who created the ultimate dad joke by sending a photo of the family dog in a pan on the stove.

Another woman received a proposal not meant for her, but styled it out perfectly by accepting, while a cunning mother texted her child to say she had hidden money in his bedroom, which he would only find if he cleaned it.

Here, Femail brings you the most hilarious messages.

Wrong number: This woman clearly liked the content of this message and was willing to drop everything and head to Paris even if it wasn’t intended for her

Almost done: When this funny dad was asked to get the dog ready, he pretended to cook her on the stove

Romance is dead: This person refused to commit to a long-distance relationship, saying he didn’t even like leaving his bedroom

This presumably sarcastic text makes reference to the two very thin, scantily-clad women in the photograph

Attack is the best form of defence: When accused of drinking again, the person replied that drinking was better than taking everything personally

Go Fetch: This clever dog was supposed to collect a ball but instead he came back with a brown potato

Know you angles: If you travel 360 degrees, you end up exactly back where you started -which most people know

Dicing with danger: When asked what dangerous game they had played, this person sarcastically wrote they had turned off their alarm when they should have woken up

Any parent can relate to this enterprising way of getting a child to clean their room. Whether it is true or not is a different matter…

Being literal: This person said they could not rise above a situation as they were only relatively short

Although this texter initially revealed they ate too much, they were still open to the idea of eating more cookies

Desert Island choices: While one person might take a novel, another would take a more practical book

What NOT to expect when you’re expecting! Women reveal the reason they’ve cheated on their partners while PREGNANT – including one who ‘slept with the old man next door

Get me out of here: People share stories of their haunted houses, from a self-playing piano to a VERY chatty ghost