HomePolitics newsElon Musk Puts Media On Notice: You Should Be Worried, 'We Have...
Politics news

Elon Musk Puts Media On Notice: You Should Be Worried, ‘We Have Only Just Begun’ 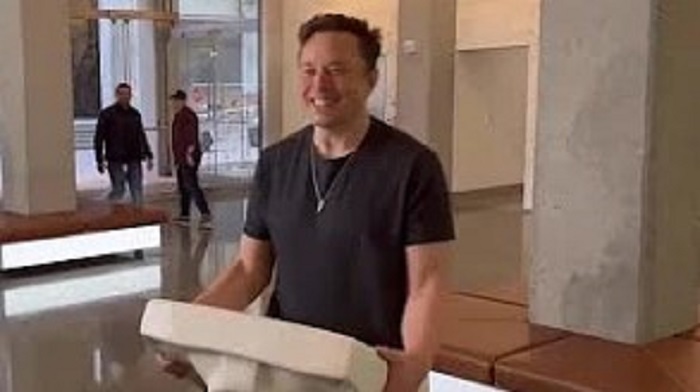 Elon Musk has put the mainstream media on notice, sending an ominous warning that they should “worry” because “we have only just begun.”

Musk’s notice comes as a series of internal document dumps involving the previous owners of his social media platform known as the “Twitter Files” has exposed how the company conspired with Democrat operatives and the intel community to censor the American people.

Certain releases have shown how the Federal Bureau of Investigations (FBI) paid Twitter and colluded with the platform to suppress the Hunter Biden laptop scandal even before it broke, while others showed how the Big Tech company controlled the narrative on COVID.

The revelations have been nothing short of shocking and, should the GOP suddenly develop a spine over the next few years, lead to countless investigations.

But Musk isn’t done yet.

Musk responded to a Substack post written by Leighton Woodhouse in which the reporter analyzed how the media has rushed to defend the intelligence community and the federal government, serving as “the propaganda arm of the state.”

“Why is corporate journalism rushing to defend the state instead of the people?” Musk replied.

Why is corporate journalism rushing to defend the state instead of the people? https://t.co/uqR0MwiqCx

RELATED: Trump: Musk Is a Free Speech Hero Who Has Done a Great Service to This Country

Elon Musk suggested he might make another power move in the social media world, alluding to the possibility that he could purchase the Substack platform next.

I’m open to the idea

Musk fired back to a posting by CNBC’s “Squawk Box” which discussed his other company – Tesla – and how it had a down year on the market and advanced the notion the CEO’s “reputation is in danger.”

“The legacy media should worry about its reputation,” Musk hit back. “We have only just begun.”

The legacy media should worry about its reputation. We have only just begun.

Could the ‘Twitter Files’ eventually lead to investigations into how the government and the DNC colluded with a media company to sway a presidential election and to lock down the American people during a pandemic?

If so, Musk’s reveal may well go down as the largest sweeping takedown of one of the most corrupt industries in America today and for the past several decades – the legacy media.

And hopefully, it will lead to a regrowth of honest journalism from the ground up. There is a place in this country for the media of a bygone era. One that questioned the government and exposed real scandals. One that didn’t focus on one man because he was mean to them.

Those journalists have been gone for quite some time. But maybe the sunlight provided by Musk will send the rats scurrying and usher in journalists with integrity and a desire to do what is right by exposing the truth.

Or maybe we’re just being too optimistic.

Why are so many in the media against free speech? This is messed up.

Musk’s efforts to expose the legacy media have even drawn praise from former President Donald Trump.

Trump, in a recent interview, praised Musk for doing the country “a big service” by releasing the ‘Twitter Files’ and called the visionary billionaire a free speech “hero.”

“Yeah, I’d say he’s a hero. I think that it’s a big part of his legacy,” Trump remarked. “I think it’s more important than other things he’s done.”

President Trump considers Elon Musk a hero: “Elon Musk did a big service when he released all of this stuff… I’d say he’s a hero. I think that it’s a big part of his legacy. I think it’s more important than other things he’s done.” pic.twitter.com/okQKfrooBg

It might very well be the biggest thing anybody has ever done to expose corruption in the media.

All of it will be for naught, however, if lawmakers fail to investigate the obvious scandal and hold people accountable for their actions.