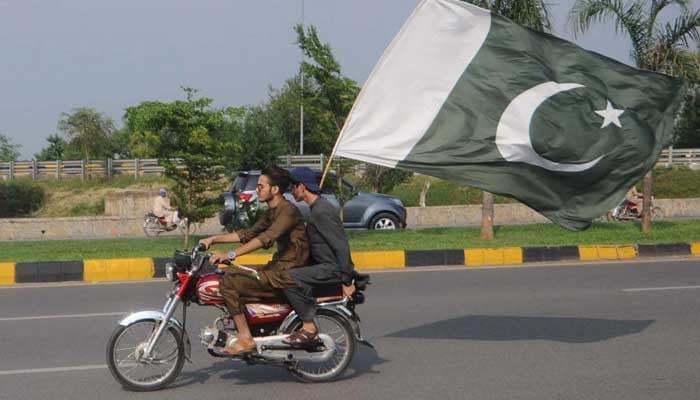 Karachi and Islamabad’s district administration imposed a ban on pillion riding to ensure peace and calm in cities ahead of New Year Eve’s celebrations.

In Karachi, a complete ban has been imposed by the city’s Commissioner Muhammad Iqbal Memon on carrying and display of arms, aerial firing, firecrackers and pillion riding of motorcycles or scooters.

The ban will be enforced across Karachi’s local limits for two days starting on December 31 till the morning of January 1 with immediate effect.

The administration has warned of strict action against those found violating the ban in the metropolitan. The violators will be booked under section 188 PPC by the city’s police, as directed by the deputy commissioners and assistant commissioners.

“On this night, a large number of youngsters from different areas of the city will move to Seaview on motorcycles and cars, which create traffic jam and inconvenience to the residents of the area,” the notification read.

The DIGP South Zone has requested that a ban under section 144 on “carrying and display of arms, aerial firing, firecrackers, pillion riding of motorcycle or scooter to safeguard the precious lives of the citizens”.

The city administration also warned the public to avoid aerial firing which may cause “untoward incidents or loss of human lives” following which it has also enforced a ban on carrying and display of arms, aerial firing, firecrackers, pillion riding of motorcycles or scooters on New Year’s Eve in the metropolitan.

Meanwhile, in the federal capital, restriction on pillion riding will be implemented from 6pm on December 31, 2022 (Saturday) to 2am on January 1, 2023.

The district administration warned of action against those violating the ban.

Meanwhile, security measures in the federal capital have been tightened by the government after it decided to deploy an extra contingent of Islamabad Police and Frontier Corps on checkposts.

Police said that the deployment of 1,000 FC personnel has been done to assist the federal capital’s police.

“FC personnel will also be deployed at checkposts on 25 spots in Islamabad,” the capital city’s police stated.

It added that the e-checkposts have been set up at different locations across the federal capital in view of security and will be monitored through Safe City.

Islamabad Police said that the protection of the life and property of citizens is its first priority. It has asked the public to cooperate with law enforcement agencies.

According to the notification, certain pillion riders may resort to violence and disrupt peace and tranquillity on New Year’s Eve in Islamabad.