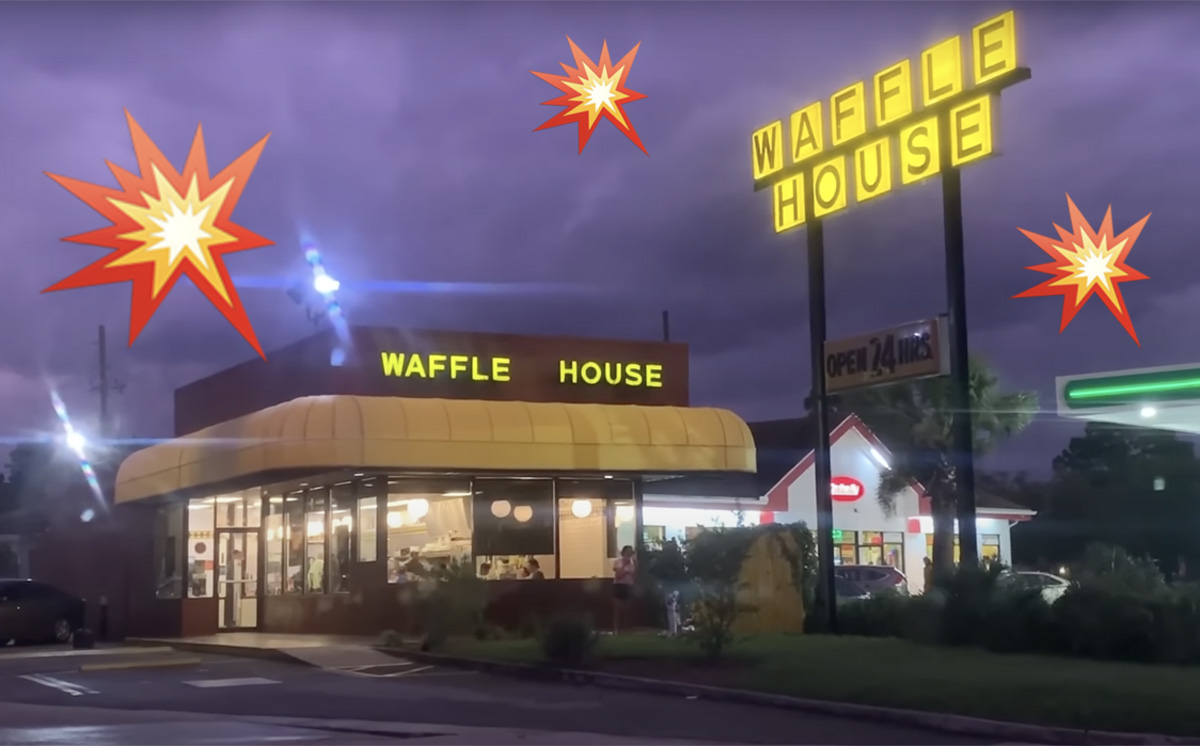 Waffle House fights are always INSANE, but this super-brief clip might take the cake!!

Recently, one of the chain restaurant’s locations in Texas buckled under a brutal brawl between customers and employees. TMZ, Newsweek, and others report the incident went down in the area around the Lone Star State’s capital city of Austin. According to Daily Mail, this viral fight actually occurred last year — but the video is only now coming to light.

Whatever the case about how this brawl came to be, the clip is WILD! And now that it’s going viral across social media platforms this week, the internet is having a field day with it!!

On Tuesday morning, a 3-second clip started making the rounds on Twitter. In it, viewers could see somebody throw a metal chair at a Waffle House employee who was working behind the counter. Unfazed, she simply knocks the chair down and honestly looks ready to fight!!

Seriously! You have to see this to believe it! Ch-ch-check it out (below):

this is Waffle House employee training at it’s finest. pic.twitter.com/QYSFFXVRwu

That is insane behavior!! Obviously, the clip lacks context about what led up to that situation. But still! Who throws a chair?!?! And whose reflexes are fast enough to knock it down like that??

Immediately, other users started commenting on the video, too:

She needs to be the lead in the next action film. Waffle House job training is off the chain ???????? pic.twitter.com/O09YsJXLwz

One asked what we want to know:

The original poster alleged this is what happened in the reply:

“waffle house customers & to be fair, she threw a glass coffee pot at them before this happened.”

Whatever actually happened, people weren’t shy about giving their take on it! Thousands more dropped some HIGHlarious comments about the vid, as you can see (below):

The young woman is the Waffle House GOAT, but I love the guy who keeps cooking like nothing is happening. https://t.co/rnTXKAQhAx

if i threw a chair at someone and they caught it like this i would immediately self combust from shame https://t.co/5bJ0U30x7l

Girl has either experienced this scenario one too many times or she is Chuck Norris’s daughter https://t.co/gUOgc2pL9r

She caught that chair IN MID AIR AND TOSSED IT ASIDE LIKE SHE WAS CAPTAIN AMERICA https://t.co/TiH5jRD9EB

Too funny!! And you can see even more reactions (below):

“So I’ve never been in a Waffle House so they exist outside of the hours of like… dark? Do they change from like a sweet little diner to the royal rumble every night?”

“After this video I think we should all unite and stop the violence against Waffle House workers. We cannot defeat them.”

“Waffle House staff are the sweetest, yet most savage group of individuals in the US”

“Is Waffle House public fight club or something?”

“Nah, but she blocked that chair like she’s done this before”

Amazing. Absolutely amazing!! Brawls at Waffle House? Thrown chairs? Discarded thrown chairs? The dude behind the counter still working like nothing is the matter?? Absolutely perfect. We love it all. NO NOTES! Ha!! Obviously we don’t condone violence, and honestly, we really hope everyone in this situation got the help they needed! Reactions, Perezcious readers??