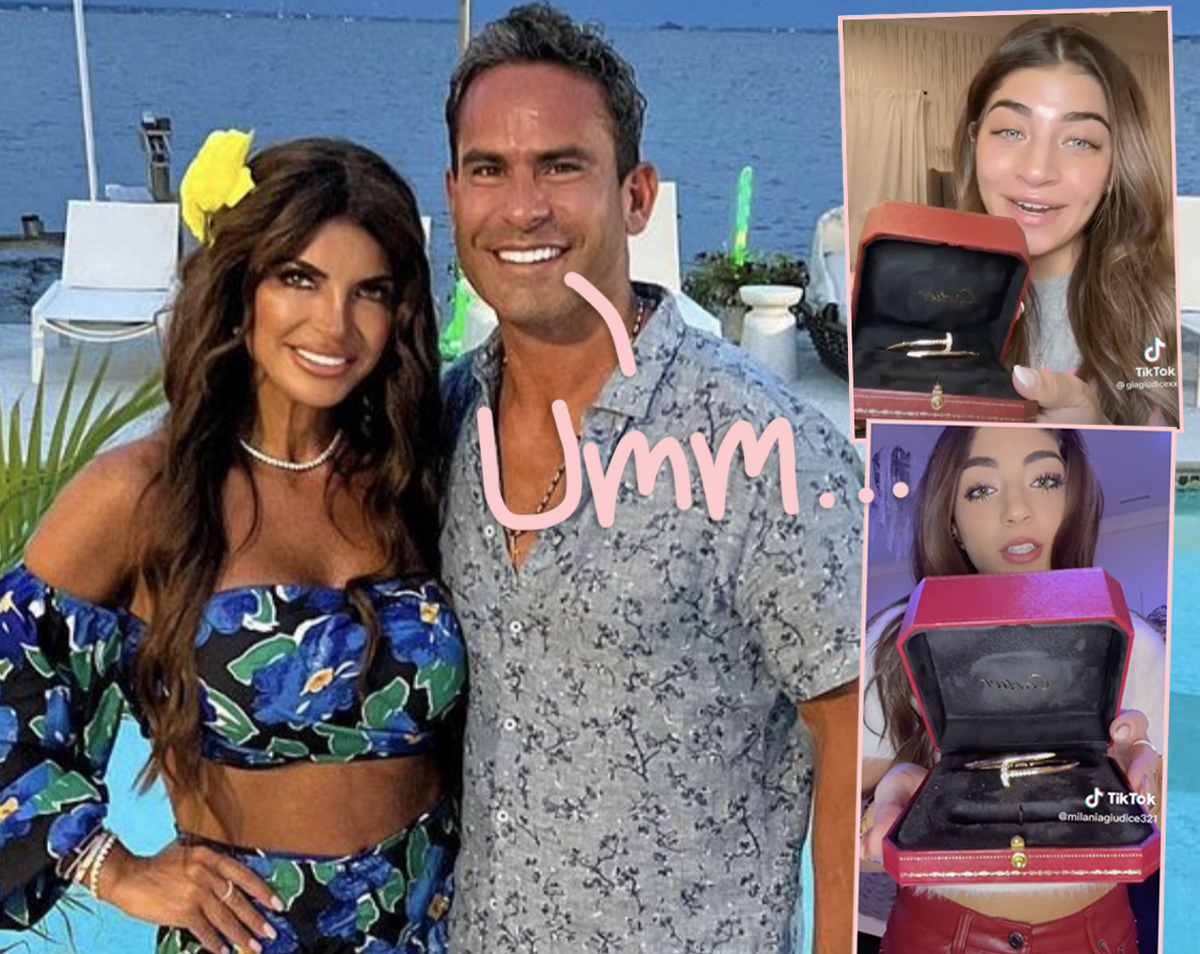 So, on TikTok and Instagram over the last couple days, Luis Ruelas has been accused of purchasing fake Cartier bracelets for the Real Housewives of New Jersey star’s girls. Fans are adamant that the bracelets are phony after noticing inconsistencies in the packaging. Followers first caught wind of this after 21-year-old Gia Giudice and her 16-year-old sister Milania Giudice both unveiled the supposedly-pricy gifts on social media earlier this week.

Related: Teresa FINALLY Binged ‘RHONJ’ For The First Time — And It Wasn’t Good!

Back on Monday, Milania took to TikTok to reveal her Christmas haul. As you can see (below), her long list of gifts included the aforementioned Cartier bracelet from Luis:

Gia also took to social media to show off her Christmas acquisitions, too.

But by then, eagle-eyed fans started noticing something appeared to be off with the way the gifts were being presented! As you can see (below), one IG account picked apart Gia’s video and questioned the layout of the bracelet’s box:

Then, the account compared it to another Cartier bracelet box and attempted to note the differences between what the Giudice girls appear to have and what is apparently the authentic version:

And another eagle-eyed TikToker called Luis out for allegedly purchasing fake Christmas gifts, too. In a deep-dive video on the matter, user @krissyballs said on cam:

“So we all heard that Luis purchased Cartier bracelets for Teresa’s five girls. But I had a few people send this to me and I just need to know. … Did we actually think that Luis could drop $12,000 on one of them, let alone five? For anyone that’s going to argue with me in the comments that this is indeed real, please feast your eyes. The embossed logo is off-center and gigantic. Cartier would never, but Carti-air would. And the interior of the box is worn out like a floor model couch at Bob’s Discount Furniture. Not to mention the bracelet looks like a piece of chain-link fence. I hate to pop the love bubble again, but someone’s gotta.”

For the record, Teresa has four daughters — not five — but OK. The rest is interesting tho!!

You can watch her full video pointing to the box’s supposedly incorrectly-embossed logo and more (below):

Fans have jumped at the chance to share their thoughts, as well!! Across both IG and TikTok, commenters weighed in with their own takes on the supposed high-end jewelry haul:

“I knew it!!! The inside of that box looked too janky for a brand new cartier box…lawd”

“These can easily be duplicated on 47th street…”

“A nice reminder that things are never what they seem”

“Money talks… Wealth whispers… And these girls are screaming.”

“Images on the websites aren’t accurate all the time, especially packing wise”

“Actually, if you watch the real video, not a screenshot, it looks real”

“I just went to the Cartier flagship and got a bracelet for Christmas. The inside is padded where the logo is. It’s real.”

Whatever may be going on, it sounds like Teresa’s family lawyer is going to get the final say on this.

Attorney James Leonard spoke to Page Six about the bracelet brouhaha. In a report published Thursday morning, the lawyer attempted to clarify the whole thing:

“I think in the spirit of what Christmas is really all about, peoples focus should be elsewhere and not on something silly like this. That being said, the girls are very happy with their bracelets and grateful to have received them.”

Not exactly a denial! But a valid point!

What do U think, Perezcious readers???