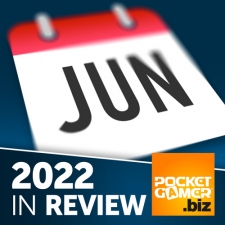 2022 was a year of big news and even bigger industry movements. Mobile gaming was no different. Here’s the stories that set the scene back in June 2022.

TikTok has taken the world by storm in recent years, quickly emerging as one of the world’s biggest social media platforms, and ByteDance has successfully leveraged that success, especially on mobile platforms, into a thriving gaming arm.

$1 billion may be a drop in the water of the global gaming industry, but it’s still notable, especially as ByteDance only branched into games publishing in 2020.

This move into publishing came as ByteDance attempted to diversify its portfolio and compete with giants NetEase and Tencent. This move has proven contentious, as Tencent has repeatedly been to court with Moonton following its own failed attempts to acquire the company. ByteDance’s meteoric rise could certainly see it become a chief competitor to Tencent and challenge its place as the dominant player in the Chinese gaming industry, and this remarkable result shows that. While ByteDance has a long way to go before it topples Tencent, it’s a scrappy underdog which Tencent may have good reason to be wary of.

Bobby Kotck re-elected to board by Activision-Blizzard shareholders

Activision-Blizzard may have dominated the headlines this year thanks to Microsoft’s attempts to acquire the company, but the company has had a turbulent year. In fact, New York tried to block the deal earlier in the year, stating that it could let Bobby Kotick avoid accountability for sexual harassment and abuse within the company, while still maintaining his place on the executive team.

Despite the criticism levied at Kotick, June 2022 saw Activision Blizzard shareholders voted to re-elect Kotick as president of the company, as well as extending the board’s term until the next shareholder meeting in 2023. The board also voted against appointing an employee representative.

Diablo Immortal was one of the year’s biggest releases, despite some notable controversy regarding the use of loot boxes. The game made over $24 million in its first two weeks of release, but China delayed the game just days before its release, with NetEase citing the need for further optimisation and an improvement in the gameplay experience.

The delay had an almost immediate effect on NetEase’s stock price, which dropped 9 percent from 151.50 HKD to 136 HKD.

Of course, delays are nothing new, but what’s interesting is that this delay only affected one country. Despite NetEase’s claim, it’s possible that NetEase felt the need to adjust the title due to China’s strict censorship laws.

Diablo Immortal would eventually see its release in China on July 26th, and echoed its success worldwide, but the delay was a signifier of the Chinese mobile market’s turbulent year.

Do you have a favourite mobile story from 2022? Take to Twitter with the hashtag #PocketGamerYearInReview to tell us your highs and lows of the year.

Want more? We’ll be bringing you the rest of the year in highlights across the Christmas break.