Traders propose closure of markets at 9pm, restaurants by midnight 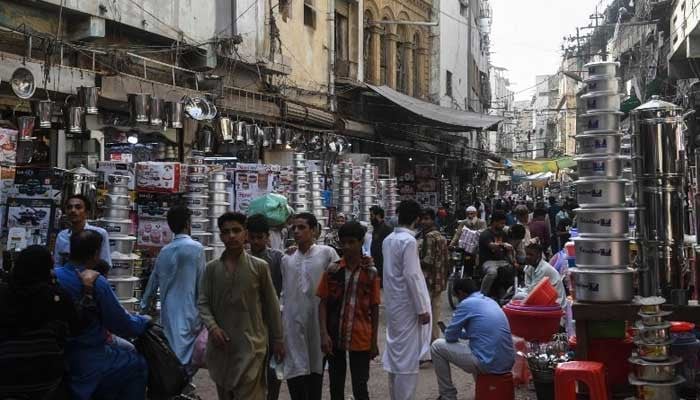 KARACHI: Traders Thursday proposed to close markets at 9pm, while restaurants can be closed between 11pm to midnight in the port city.

They also shared the proposal in a meeting at the Karachi Commissioner’s Office, which was held to manage the energy crisis with a focus on restricting the opening and closing hours of markets and wedding halls in the metropolis.

Suggestion to close wholesale markets by 6pm was also given, while shopping centres and bazaars were proposed to put up the shutters by 9pm. Wedding halls and restaurants, meanwhile, were suggested to be closed from 11pm to midnight.

The city administration — in its bid to curb the energy crisis — proposed to close markets from 7pm to 9pm.

The traders suggested Sundays as a holiday and sought relief for market timings on Saturdays. They requested for cases not to be registered if there is a delay in the closure of markets after the administration’s prescribed hours.

They also demanded measures to improve the city’s traffic system. The simultaneous closure of markets and bazaars in Karachi will increase traffic pressure, they added.

Sindh Labour Minister Saeed Ghani said that business hours will be decided according to the majority opinion of the traders. He also said that implementation will be done on suggestions including the use of solar energy to deal with the energy crisis.

He added that Sindh has told the Centre that it will consult stakeholders on the closure of markets and other businesses in the port city.

“How will businesses function if there is no electricity for six to eight hours out of the 10 prescribed business hours?” Ghani said, sharing his concerns in line with traders.

Meanwhile, All Karachi Tajir Ittehad (AKTI) chairman Atiq Mir requested for a practical decision to be taken regarding the matter.

Last week, the federal government unveiled its energy conservation plan, according to which all the markets and restaurants were to be shut down at 8pm.

Defence Minister Khawaja Asif said that the wedding halls will be closed at 10pm.

The timings of the restaurants may be extended an hour or so, he added.

“If 20% of the workers are sent to work from home on a rotational basis, this will save Rs56 billion,” the minister further said.