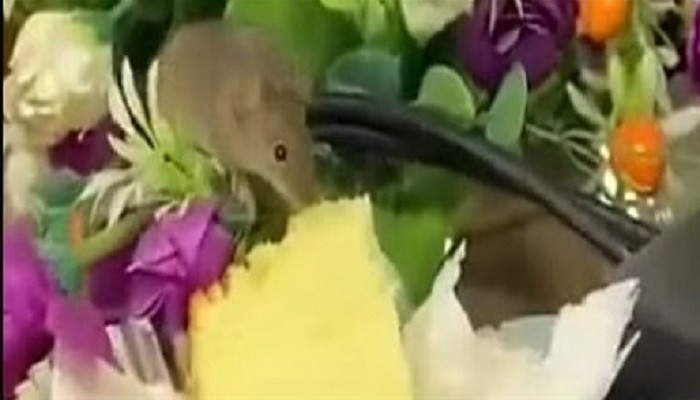 A video of a rodent eating cake from a plate at a university in Indian Illegally Occupied Jammu and Kashmir (IIOJK) has been viewed thousands of times in false posts in Pakistan alongside a claim it was filmed during a meeting of officials in southwestern Balochistan province.

The university confirmed to AFP that it shows its students during a seminar in December. The man shown speaking in the video separately published an article to explain that he is a Kashmir-based communications expert who was invited to speak to journalism students at the university.

The 26-second video shows a man addressing a group of people seated around a table while a rodent nibbles a piece of cake on a plate in front of him.

The video is captioned: “Chief Secretary Balochistan“, suggesting that Abdul Aziz Uqaili, the top bureaucrat of Pakistan’s southwestern province of Balochistan, was shown addressing the meeting.

Balochistan is Pakistan’s largest and poorest province despite being rich in natural resources.

A reverse search image of the video’s keyframes on Google found it was shared both by Pakistani and Indian media outlets.

Pakistani media tended to give conflicting reports about the location of the meeting, while Indian media outlets did not include a location.

AFP contacted Dr Arif Khawja, a dental surgeon based in Jammu and Kashmir, whose tweet carrying the video was picked up by several media outlets. He told AFP that the clip was filmed in IIOJK, but said he did not know the exact location.

Further interviews with AFP contacts in Kashmir found that the video was filmed at the Central University of Kashmir.

A university official told AFP that the video was shot during a seminar on its campus in the district of Ganderbal on December 5, 2022.

In response to the false posts online, Sajjad Bazaz, a corporate communications head at a local bank, said the video shows him speaking to journalism students at a university seminar, and tweeted his own commentary about the misinformation circulating online on December 14.

His article was published by the English-language newspaper Greater Kashmir alongside a headline that reads: “The rat that shook Baluchistan.”

In his article, he said the video shows him speaking to newly inducted journalism students.

“Precisely, during my interaction with the media students, we spotted a rat roaming around the venue and within no time boarded the dais where the host, who himself is an internationally acknowledged filmmaker and had invited me to the interactive session, was sitting beside me,” he wrote.

“We didn’t lose time to decide not to interrupt the rat but to capture him munching on the piece of cake.”

Bazaz said that the video was shot in IIOJK and had been wrongly linked to Balochistan.

“Anything that goes viral on social media platforms should be subjected to fact-checking,” he wrote.

Below is a screenshot comparison of the video in the false post (left) and Bazaz’s article published by Greater Kashmir (right):