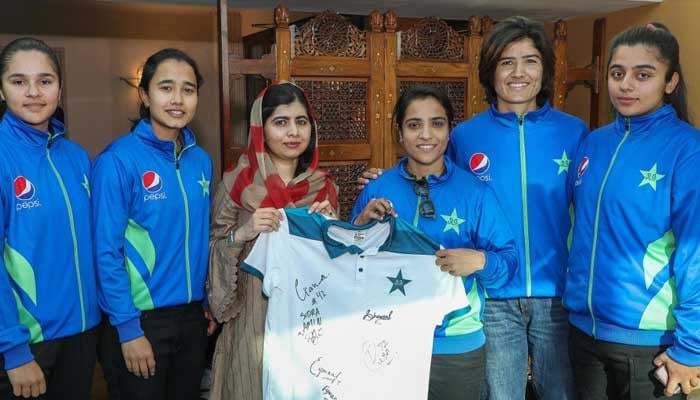 LAHORE: Nobel Peace Prize holder Malala Yousafzai, along with her husband Asser Malik, met with the Pakistan women’s cricket team as well as the U-19 women’s team, before departing for London on Friday.

Speaking to the athletes, Malala expressed her best wishes for their upcoming endeavours, especially the 2023 ICC Women’s T20 World Cup. Malala motivated the players to have faith in their abilities, carry on practicing and enjoy the game as much as they can.

She added that the players should always accept any challenges because success always lies beyond hardships and challenges.

Malik said both of them are very fond of cricket and follow it regularly. They would also try to come and watch the women’s World Cup games, he added.

The players gifted Malala a signed T-shirt and a Pakistan Cricket Board (PCB) jacket.

Malala Yousafzai arrived in Pakistan on Tuesday along with her family and husband Asser Malik. Malala attended multiple seminars and sessions, including a meeting with CM Punjab Chaudhry Parvez Elahi.

The Nobel laureate called on the CM on Wednesday to persuade him for banning corporal punishment in schools and madrassahs across the province.

Upon Malala’s request, the chief minister announced the initiation of legislation banning the act. He said that the corporal punishment of students — particularly female students — is absolutely unacceptable.

Malala last visited Pakistan two months back when she visited flood-affected areas of the country.

Her visit in October — only the second since she was flown to Britain for life-saving treatment — also came at a time when thousands of people protested in Swat.

Yousafzai was just 15 years old when the TTP shot her in the head over her campaign for girls’ education.

Malala Fund said in a statement said that her visit aims “to help keep international attention focused on the impact of floods in Pakistan and reinforce the need for critical humanitarian aid.”