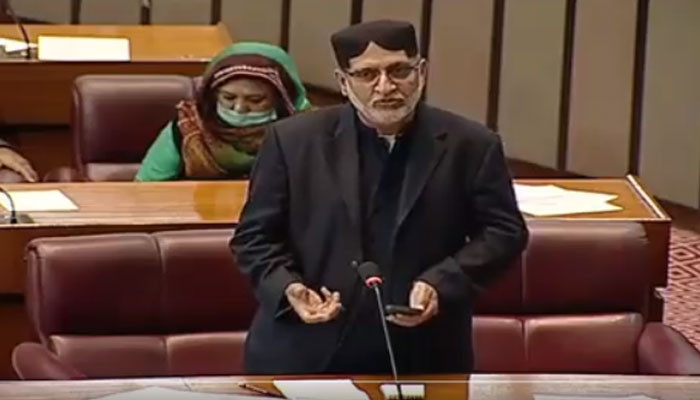 The government’s coalition partners BNP-M and Jamiat Ulema-e-Islam-Fazl (JUI-F) raised concerns regarding the approval of project funding and the foreign investment protection bill, which was passed amid opposition from the two parties.

Speaking on Geo News programme ‘Capital Talk’, Mengal once again expressed concern over the progress on the bill and said that there is a possibility that his party detaches itself from the ruling coalition if the concerns are not addressed.

He said that all the allies should be taken in the loop while making decisions.

“Instead of parties, investors are taken into confidence,” Mengal said.

He said that that the companies and their CEOs are given more importance than Parliament, therefore the allies will also have to reconsider the basis of their alliance.

He said that the lives of people are changed in places rich with resources.

“But it’s Balochistan’s misfortune that the way its resources were discovered, it became a misery for us,” Mengal said.

Meanwhile, JUI-F’s leader Kamran Murtaza, who was also a guest in the programme, said that the Foreign Investment Bill was passed forcefully with “deception”, which is a threat for the Centre.

Pakistan is set to meet the deadline of December 15 for signing the Reko Diq deal after the federal cabinet on Tuesday approved the project funding. The cabinet met here with Prime Minister Shehbaz Sharif in the chair.

In light of the approval, the Pakistan government will sign the deal on December 15, a statement issued by the PM Office late Tuesday night said.

President Arif Alvi also signed the Foreign Investment Promotion and Protection Bill 2022 on Tuesday. The bill, which was already passed by two houses of parliament on Monday, is aimed at giving protection to foreign investments in the country.

The Foreign Investment Promotion and Protection Bill 2022 was passed amid opposition from the JUIF and Balochistan National Party-Mengal.

The statement from the PM House said the Ministry of Petroleum and other concerned ministries were also directed to go ahead with signing the Reko Diq deal on December 15.

“The federal cabinet asked secretary/additional secretary petroleum under Rules of Business 1973 to sign the deal on behalf of the Pakistan government,” the cabinet decided. The statement said that the cabinet was apprised that a Presidential Reference under Article 186 was filed to secure legal opinion and the Supreme Court on December 9, 2022 declared that process of reorganisation of the Reko Diq project funding plan was transparent.

The apex court also observed that the agreements which are being signed in this connection are also as per law.

The cabinet was also informed that it was decided with the coalition that legislation made in parliament was confined only to the Reko Diq deal. The meeting also okayed regulatory framework for the Reko Diq Project Company.

The meeting also constituted a five-member committee, which would meet leaders of the coalition parties to remove their reservations. It was also decided certain amendments would also be made in consultation with stakeholders.

In case the agreement is not signed by December 15, Pakistan would have to pay four million dollars per day as interest on the 5.9 billion dollars penalty imposed by the Inter Center for Settlement of Investment Disputes on July 12, 2019.