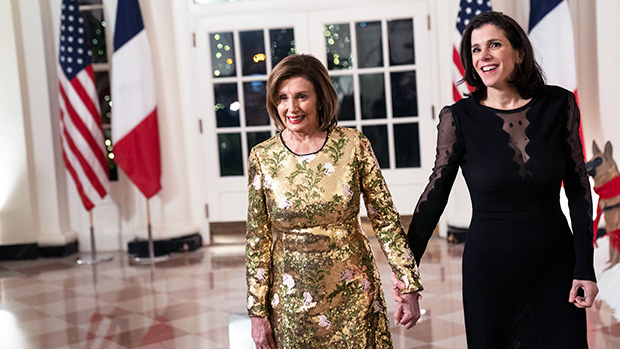 Nancy Pelosi, 82, shined at the White House State Dinner hosted by POTUS Joe Biden and First Lady Jill Biden on Dec. 1. Nancy, who stepped down as the Democratic House Speaker last month, wore a gorgeous gold gown to the event. She was joined by her daughter, Emmy-nominated journalist Alexandra Pelosi, 52, who wore an elegant, plunging black gown. Nancy and Alexandra stepped out together over one month after the politician’s husband Paul Pelosi, 82, was the victim of a home invasion attack.

The president and the first lady’s first state dinner was held at the White House’s South Lawn to celebrate the United States’ relationship with France. French President Emmanuel Macron and his wife, First Lady Brigitte Macron, were in attendance. In addition to Nancy, other U.S. politicians that were there included Senator Susan Collins, Secretary of Transportation Pete Buttigieg, former Atlanta Mayor Keisha Lance Bottoms, and more.

Nancy, who has been a congresswoman since 1987, announced she would not be the House Minority Leader in the next Congress on November 17. “For me the hour’s come for a new generation to lead the Democratic caucus,” she said in a speech on the floor of the House of Representatives. “Standing here today, I’m endlessly grateful for all of life’s blessings. For my Democratic colleagues whose courage and commitment with the support of your families have made many of these accomplishments possible, in fact, could not have been done without you,” she said.

Nancy also thanked her children — Alexandra, Christine, 56, and Paul Jr., 53, — and her husband for their support over the years. She also mentioned her husband’s scary home invasion attack, saying, “We’re all grateful for all the prayers and well wishes as he continues his recovery. Thank you so much.”