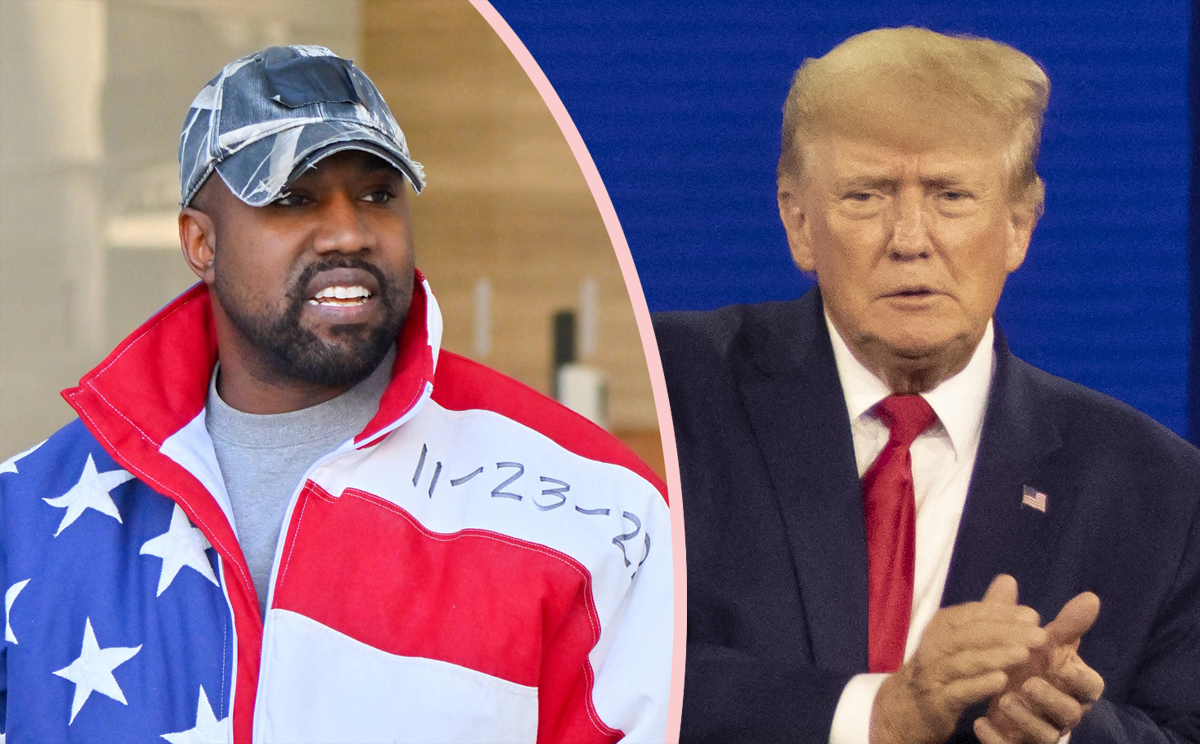 OK, this feud is just getting funny now.

Kanye West used to LOVE Donald Trump. Remember when he said wearing his MAGA made him feel like a superhero? Lately, however, the two 2024 presidential candidates (sigh…) have been butting heads.

First Trump was quoted by an insider as saying Ye was acting too “crazy” with his public antisemitism rantings. Then they actually got together for dinner… and everything got way worse. Kanye said that during the meeting he pissed off Trump by suggesting the former POTUS be his running mate in 2024. He claimed Donald went all mafioso on him then got so upset he started yelling, including an insult to his ex Kim Kardashian.

Trump then went public with his version of events, saying he only entertained the meeting because he was trying to “help a seriously troubled man.” It also became clear Teflon Don is aware of how the Republican Party is turning on him because he tried to distance himself from Ye’s politics and fringe friends — one of whom was a well-known (and unabashed) white supremacist incel named Nick Fuentes. Trump claimed he “knew nothing about” the man, who Kanye had explained was a total Trump loyalist. Ha!

So now Ye is hitting back at Trump’s version of events with perhaps the most hilarious insult yet. The Power rapper visited right-winger Tim Pool‘s Timcast podcast on Monday night… for a while anyway — but we’ll get back to that.

Responding publicly to the ex-President he reiterated how much of a fan he was, saying:

“I would have never wanted to do anything that hurt Trump… I’m on Trump’s side.”

“I went into the trenches for Trump… There is no one in my position that wore that hat.”

It’s true. He got a lot of heat for wearing the MAGA hat on SNL. Rightfully so, obviously, he was supporting Trump ffs. But he made clear he wasn’t going to stand for any criticism, saying:

“Trump said things that hurt me. He lied about me, but I mean, he’s known for lying.”

Ha! OMG! We have to be honest, we love it when these people fight and the truth finally comes out. Kanye was such a big supporter… but deep down, yes, he 100% knows that every other word that comes of Trump’s mouth is total B.S. And as soon as they’re at odds, even in the slightest, he can admit it. Priceless.

OK, speaking of not being able to take any criticism at all… Kanye actually stormed out of the podcast after just a few minutes! Why? It wasn’t antisemitic enough for him! Really!

They were talking about cancel culture when Ye compared himself to Martin Luther King Jr, and his treatment by the press to protesters being hit with firehoses:

“I thought I was more Malcolm X, but I found out I’m more MLK. As I’m getting hosed down every day by the press and financially, I’m just standing there.”

Pool agreed, saying, “I think they’ve been extremely unfair to you.”

But Ye wasn’t letting that go. He wanted his fellow provocateur to say exactly who “they” is, demanding:

In other words, Kanye meant the “they” here is the Jewish people. The supposed cause of all his problems. Typical Nazi B.S. Pool responded:

“Corporate press. I’m not using… I don’t use the word as the way, I guess, you guys use.”

Ye’s pal Nick Fuentes was also there (as was Milo Yiannopoulos — apparently they go everywhere together now as a party of three — we’ll let you figure out which party). He jumped in:

Pool pushed back ever so slightly, saying:

As he tried to equivocate, to explain his position, Ye asked:

And instead of waiting around for an answer, he got up and left. They literally were not antisemitic enough for him. He just walked out, after only a few minutes of the interview. You can see that whole moment (below):

Shortly after, a producer came on camera to confirm that Ye, Fuentes, and Yiannopoulos had left. Hilariously a lot of Pool’s audience turned on him in the comments. Why? Oh, because they’re actually in agreement with the antisemitic fringe. The fringe IS the right wing.

People like Pool may like to dog whistle and court those white supremacist fans while not outright saying anything that can get them deplatformed, but that’s the mob they’re speaking to.

With some luck, maybe this infighting will finally show a lot of the right wing who they’ve been in bed with this entire time. Will it change things? We’ll have to wait and see. But we’re waiting with popcorn because folks like Trump and Ye fighting means whoever loses, we all win.