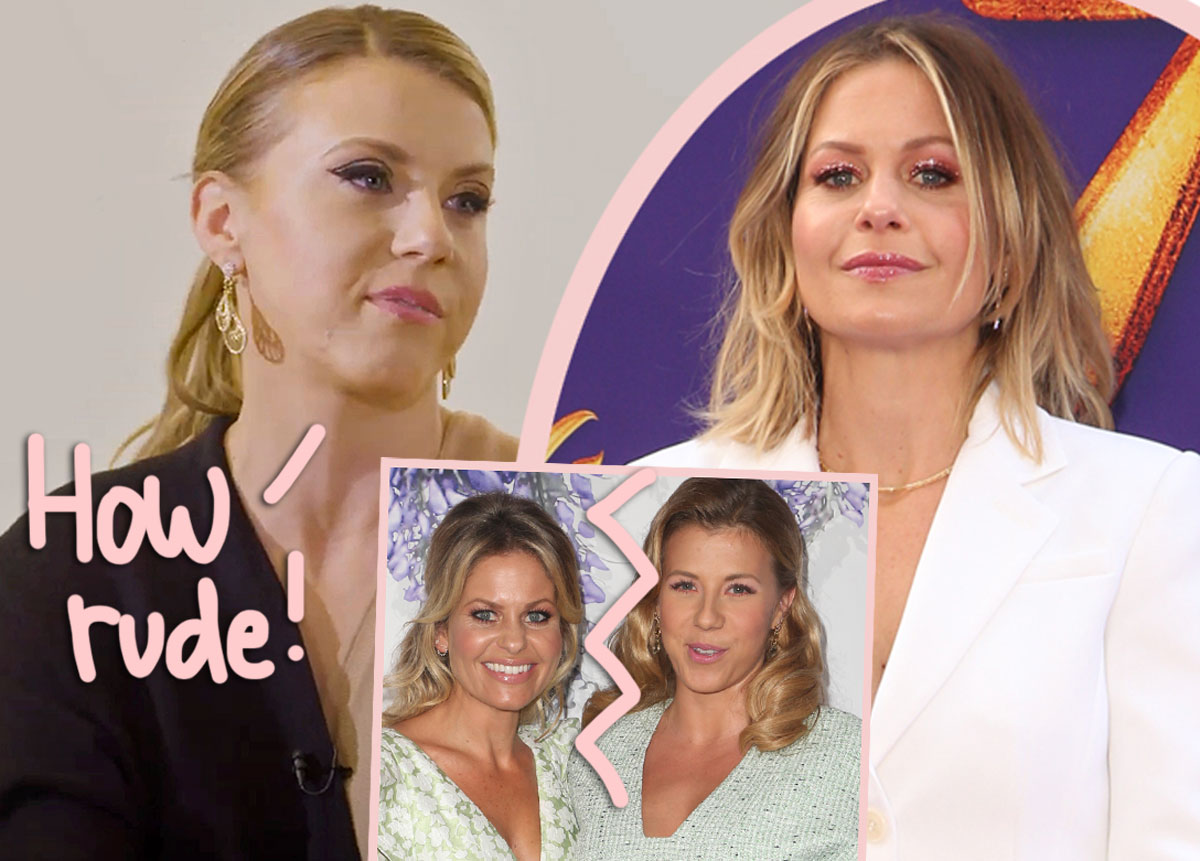 Things aren’t so merry and bright for the Tanner sisters these days!

According to a new source opening up to ET on Tuesday, Candace Cameron Bure and Jodie Sweetin, who played sisters DJ and Stephanie Tanner, respectively, for years on Full House and Fuller House, are in a “pretty serious” disagreement following Candace’s very controversial “traditional marriage” comments!

Earlier this month, the devout Christian spoke with WSJ. Magazine about her exit from the Hallmark Channel and her next chapter at the Great American Family network, which has no plans to include same-sex couples in their movies. While addressing this, the 46-year-old very clearly said she wants to “keep traditional marriage at the core” of her Christmas flicks.

Related: JoJo Siwa Has No Interest In Speaking To Former Idol Candace EVER Again!

Naturally, the hateful declaration sent the internet into a tailspin! Several notable celebrities clapped back at the comment, including Hilarie Burton, Jeffrey Dean Morgan, and Maren Morris. Then JoJo Siwa entered the chat. The pair have had a complicated history ever since the Nickelodeon star called CCB the rudest celeb she’s ever met in a TikTok earlier this year. The teen once again put the actress on blast for her anti-LGBTQ remark and Jodie slid into her comment section to send her support, writing:

“You know I love you

Phew. It’s been a lot! And it doesn’t sound like it will be resolved anytime soon…

While chatting with ET, the insider explained the co-star’s ongoing dispute has to do with their different world views since Jodie “is progressive in her beliefs and Candace is very religious in hers.” AKA she’s conservative as f**k! Cause it’s not like every religious person is a proud homophobe! Reiterating all this, the confidant continued:

“They have different views and opinions on various important topics.”

All of this has probably been pretty obvious to both of them behind the scenes. We mean, Candace has made a habit out of preaching her religious views on social media. But it seems her “traditional marriage” quote was just too much for Jodie to let slide. According to the source, Bure’s comments to WSJ. “held a lot of weight,” but it also didn’t help that Jodie so publicly took a stand against Candace, the insider dished:

“Candace’s quote about traditional marriage impacted a lot of people. Jodie does not agree with Candace’s remarks and wanted to show where she stands. Candace is upset that Jodie chose to do this in a public way instead of talking to her one-on-one.”

Well, if she can speak her mind so publicly then her on-screen sibling should be able to do the same! Just saying. ET tried to get a comment from the stars, but Candace’s reps couldn’t be reached and Jodie’s team said they don’t have a comment at this time. So, we bet nothing has changed.

As for the A Christmas… Present star, she’s been standing by her word, saying in a long-winded statement after making headlines last week:

“We need Christmas more than ever. I am a devoted Christian. Which means that I believe that every human being bears the image of God. Because of that, I am called to love all people, and I do. If you know me, you know that I am a person who loves fiercely and indiscriminately. My heart yearns to build bridges and bring people one step closer to God, to love others well, and to simply be a reflection of God’s huge love for all of us.”

To her vocal haters, she added:

For her part, Jodie took to social media today to share several organizations fans should consider donating to for Giving Tuesday and she included GLAAD! So clearly she’s passionate about standing up for the LGBTQ+ community, even when it means striking up a feud with one of her oldest friends! Reactions, Perezcious readers? Do you think they’ll be able to make amends? Sound OFF (below)!