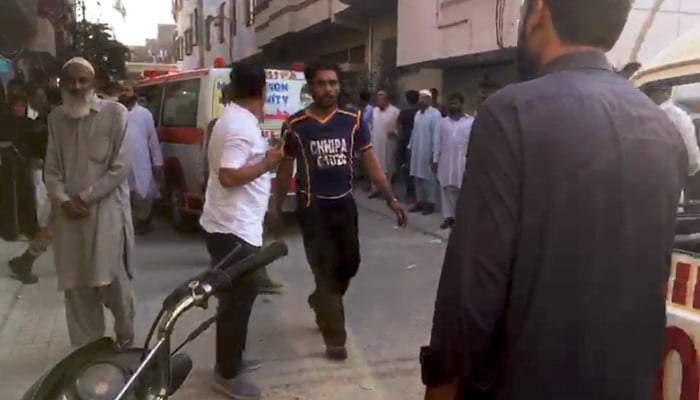 KARACHI: Bodies of a woman and three young girls — aged between 10-16 — were found at a house in the Malir area of the metropolis on Tuesday, police officials confirmed.

According to the police, the four members of the family were killed with a sharp-edged object in the Shamsi Society. A man was also found in critical condition at the house.

After being informed about the situation, the police rushed to the scene and shifted the bodies and the injured to the hospital.

Senior Superintendent of Police (SSP) Korangi Sajid Khan Sadozai said that the injured man was identified as Fawad. The police have recovered a knife, apparently the murder weapon, from the crime scene, the police official added.

SSP Sadozai ruled out the possibility of someone coming into the house and murdering the victims as the family resided in a small portion of a house, which comprised two rooms and there was no entry point from the backside.

“After inspecting the house and given the circumstantial evidence, I am sure that Fawad has committed these murders,” the senior police officer told Geo News.

SSP Sadozai said that the suspect’s mother and sister-in-law — who live in the portion below them — broke the door and entered their rooms. “The mother told me that she believes that Fawad has committed [the murders].”

The police officer said the mother informed the authorities that the relations between the couple had never deteriorated to such an extent that he would murder his wife, albeit, they would often fight.

SSP Sadozai said it is possible that the victims might have been drugged before being killed as given the amount of blood in the house, they should have screamed for their lives — but they didn’t.

“The sister-in-law of Fawad has told police that she heard one scream of Fawad’s wife.” About the victims being drugged, he said that it can be confirmed once the forensics report comes in.

Fawad works as a salesman at a private company, the SSP added.

Fawad is in critical condition at the hospital, hence, the police did not record his statement, said Sadozai.

‘Wife misbehaved with me’

In his initial statement to the police, suspect Fawad said he was depressed due to financial issues and was tired of explaining things to his wife.

“My eldest daughter started crying because of the fight. She said that our quarrels bothered them [the children],” he told the police, adding that his two other daughters were preparing to sleep.

Fawad further told police that his wife misbehaved with him after lunch. He confessed to killing his daughters while his wife was in the bathroom.

“I was depressed due to money and decided to kill everyone and myself,” the suspect said.

Referring to an unknown investor during his statement, Fawad said: “I sent the pictures to my investor and wrote that I ended my family. I wrote to the investor that I’m now killing myself.”