Under the Radar: The Lesbian Bar Project 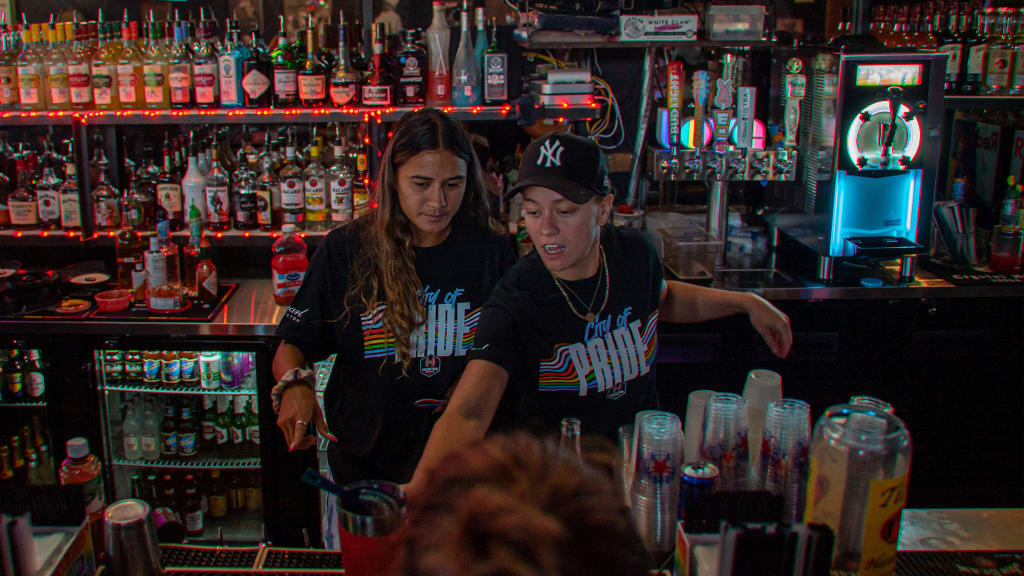 When the COVID-19 shutdown stripped people away from friends and family, filmmakers Erica Rose and Elina Street began to contemplate the crucial role that community plays in our lives. Although their idea for The Lesbian Bar Project (LBP) was born even before the virus hit the United States, it came to fruition during the pandemic. In October 2020, Rose and Street launched a PSA about the disappearance of lesbian bars across the country. LBP then ran a four-week fundraising campaign, raising $177,000 to support the lesbian bars still standing.

The LBP was created to draw attention to the lack of public lesbian+ spaces and celebrate existing ones. As LBP’s website explains, there were roughly 200 lesbian bars across the country in the 1980s. Today, that number has shrunk to 24.

It would be easy to assume that increased representation of the 2SLGBTQIA+ community would also mean an increase in community facilities. However, there remains a severe shortage of lesbian-oriented spaces in the U.S. The LBP defines a lesbian bar as one that “[creates] space for people of marginalized genders including women (regardless if they are cis or trans), non-binary folks, and trans men. As these spaces aim to be inclusive of all individuals across the diverse LGBTQIA+ community, the label Lesbian belongs to all people who feel that it empowers them.”

This October, LBP launched a limited series on Roku, “The Lesbian Bar Project.” Created and directed by Rose and Street, “Lesbian Bar Project” series is made up of 30-minute episodes highlighting the people involved in the bars that the organization has been fundraising for. “Orange is the New Black” actress, comedian, and musician Lea DeLaria (“Orange is the New Black”) is among its exec producers.

The first few episodes highlight the tumultuous journey of Julie Mabry’s Houston-based bar Pearl. Affectionately nicknamed “Saint Julie” by patrons, Mabry was inspired to open her own lesbian+ bar after visiting a gay bar with her sister Sarah when she was younger. It was the first space she saw her sister feel safe enough to be her authentic self, without being judged nor chastised. Mabry was driven to create that type of safe space for others.

Though both sisters have now been sober for over a decade, Pearl is still up and running. The true value of a lesbian bar does not come from its provision of alcohol, after all: queer bars are about community and having a space where you are free to be yourself. Mabry is adamant that her bar remains a place where all types of people feel welcome and safe. This includes the H-Town Kings, a group of drag kings who perform weekly at Pearl. In further efforts to unite the community, Mabry hosts crawfish bakes every Sunday. Recognizing that food cultivates connection, she organizes regular events for people gather and foster all kinds of relationships.

The growing number of pop-up events around the country advertised through social media, such as Lesbian Social Detroit, are a great resource, especially for the younger generation. However, these efforts do not supersede the need for permanent, reliable, physical locations to foster community. The last 24 lesbian bars in existence do not even span all of the major U.S. cities. The list, for example, does not include a single lesbian+ oriented bar in Los Angeles, despite the vast nightlife geared towards gay men in West Hollywood.

Smithsonian Mag digs into this disparity between leisure spaces for gay men versus queer women and those of marginalized gender identities. The article observes that lesbian+ bars “cater to a more narrow demographic and take in less money, because women, trans people, and non-binary folks tend to have less ‘leisure dollars’ due to pay inequity and discrimination.” As Mabry explains, “Even before COVID-19, women had less disposable income, which means lesbian bars typically don’t ask for cover charges or provide bottle service, yet they pay the same increasingly high rents as gay and straight bars. Those same rising costs also push out residents who called those neighborhoods and bars home.”

A lack of spaces to connect with peers can of course lead to alienation and isolation — feelings most of us have experienced, to varying degrees, during the pandemic. The LBP is protecting the existence of these safe spaces for queer people, especially the more marginalized demographics of the 2SLGBTQIA+ community. Not only is the project and the docuseries supporting these women-owned businesses, it is also raising awareness of these issue and working to ensure that there will always a space where all people feel welcome.

“The Lesbian Bar Project” is now streaming for free on Roku.

Under the Radar offers a chance for us to highlight works by and/or about women that haven’t received big releases or significant coverage in the press, but are wholly worthy of attention.