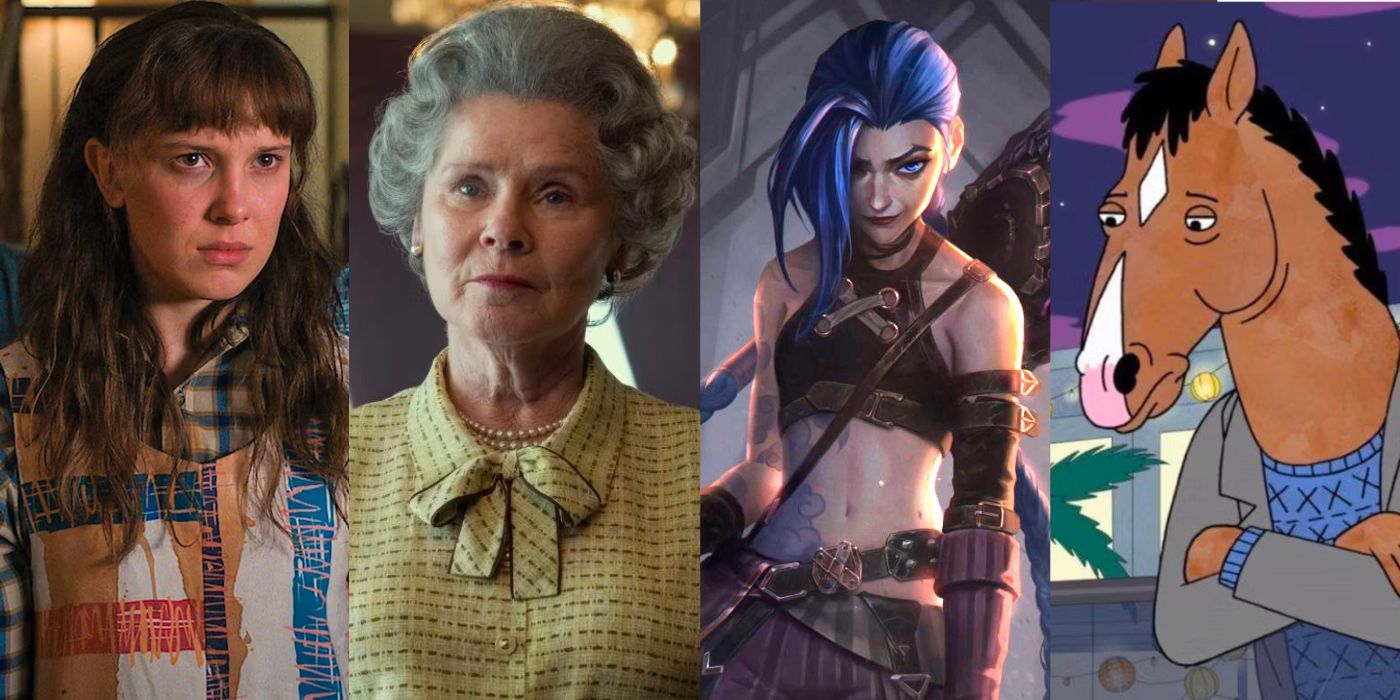 Since 2013, Netflix has churned out a whopping amount of original content. They deliver quality as well as quantity: in 2021 alone, Netflix’s original programming won 44 Emmy Awards; more than any other production company. Netflix has had its fair share of duds, of course. (See Real Rob and Emily in Paris). But a handful of its shows, like Bojack Horseman and Black Mirror, have rightly earned their place in the pantheon of great TV.

RELATED: The Top 10 Most Popular Movies on Netflix Right Now

Netflix’s deep pockets mean they have been able to produce several large-scale shows starring big names that can more than compete with anything made by HBO or AMC. The company’s most acclaimed shows span a range of genres, from sci-fi and comedy to historical drama and crime – IMDb users have made it easy to determine the best Netflix original series.

The list of IMDb’s top series is constantly shifting, which is why it’s not surprising that the best Netflix originals on the platform would change, too. With highly-anticipated new seasons of hit shows like Arcane and Black Mirror in the works, it’s the perfect time to take another look at the top-rated Netflix original series on IMDb today.

Heartstopper rightly premiered to critical acclaim and quickly became one of the most popular Netflix original series when it was first released. Based on Alice Oseman‘s eponymous webcomic and graphic novel, the coming-of-age romcom follows Charlie Spring (Joe Locke), a schoolboy who falls for his classmate Nick Nelson (Kit Connor).

From its heartwarming story and well-written characters to its gorgeous comics-inspired visuals and effortlessly sweet twists, there’s more than one reason to love this show. Viewers who enjoy lighthearted teen romance series should consider giving this series a shot.

House of Cards was the first show Netflix produced. It stars Kevin Spacey and Robin Wright as Frank and Claire Underwood, two amoral politicians seeking ultimate power in Washington, D.C. It’s based on a British TV series from the 1990s, but the Netflix version doubles down on the Machiavellianism. House of Cards has been acclaimed for its gritty take on politics and for its well-drawn characters.

Following allegations of sexual misconduct against Spacey in 2017, Netflix cut ties with the actor. As a result, the final season was made without him, but Wright more than carries the show on her own. Season 6 follows Claire as she assumes the presidency and sets out to destroy her enemies once and for all.

One of the best Netflix series on IMDb isn’t a total original, as the first three seasons of Arrested Development aired on Fox, with its latter two seasons then premiering on the streaming platform. The renowned sitcom is centered on the Bluths, who used to be a rich family. The comedic series explores their experiences after losing their wealth, and set the standard for entertaining portrayals of a dysfunctional family on TV.

Now considered a cult classic, Arrested Development is beloved for its witty yet often dense brand of humor. Its painfully-relatable characters make the series worth rewatching over and over again, as every episode is guaranteed to be full of gut-busting gags, hilarious arguments, and just a generally good time.

Dark is a German sci-fi series that follows several characters in a small town after a local child goes missing. It begins as a murder mystery, but the plot eventually evolves into a vast, interconnected time-travel story that spans multiple generations.

On the surface, it bears some similarities to Stranger Things, but it’s ultimately grittier and more violent. A better comparison would be to David Lynch‘s Twin Peaks. Dark is an ambitious show that deserves kudos for its commitment to an outlandish premise. The story gets a little convoluted in Seasons 2 and 3, but the acting, score and cinematography are solid throughout.

Stranger Things centers on a group of kids in small-town Indiana during the 1980s as they encounter a number of supernatural threats. It’s the ultimate 80s nostalgia trip, from the outfits to the music to the slang (and don’t get us started on the haircuts). The show also references the sci-fi that was popular at the time, including the work of Steven Spielberg, John Carpenter, and Stephen King.

Without a doubt, Stranger Things is Netflix’s flagship show. Viewers collectively spent a record-breaking 287 million hours watching the latest season during the first weekend it was out. So powerful is the gravitational pull of Stranger Things that it can even propel decades-old songs like Kate Bush‘s ‘Running Up That Hill’ to the top of the charts. (It appears to be having a similar effect on Metallica’s ‘Master of Puppets’, which was used in the Season 4 finale). Stranger Things‘s fifth and final season airs next year. With a feature-length finale, it looks set to be the biggest season yet.

The Crown is a historical series about the life of Queen Elizabeth II. The show follows the monarch from her early years on the throne in the 1950s up to the 21st century. Over its four seasons, three actresses have played Queen Elizabeth at different points in her life: Claire Foy, Olivia Colman and Imelda Staunton. All of them put in excellent performances, each offering a unique interpretation of the Queen.

While it has sometimes been criticized for inaccuracies and for straying into hagiography, The Crown remains a well-crafted drama. The plot becomes surprisingly gripping at times, as the show covers political scandals, attempted coups and terror plots. The cinematography is gorgeous too, and the set designers lovingly create the period settings, especially the manors and palaces. It is an engrossing peak into a remarkable life, and also succeeds as a dramatization of recent UK history.

This epic crime saga portrays the life of drug lord Pablo Escobar (Wagner Moura) and the DEA agents who sought to bring him down. It’s also a harrowing look at the carnage wrought by the illicit cocaine trade. The show weaves in archival footage and interviews, lending it a realism that a lot of crime dramas lack.

Narcos received positive reviews, with critics praising the authenticity of its characters and its complex storylines that go beyond generic cop stories. The show even received a shout-out from rapper Pusha T.

The show overflows with witty dialogue and endless animal puns, not to mention lots of visual gags. The colorful animation is a great foil to the subject; the series explores depression, addiction, and trauma. Bojack is one of TV’s all-time great self-destructive anti-heroes, up there with Don Draper and Tony Soprano.

This dark anthology series explores the pitfalls of the digital age. Most of the episodes are set in dystopian near-futures where technology causes problems for humanity. The Twilight Zone was rebooted in 2019, but Black Mirror remains the true heir to that classic show.

In addition to its high-concept premises, Black Mirror also has impressive range. A few of the best episodes are bleak and violent, while others are comedies, satires or even love stories. Some highlights include ‘Nosedive’, a parable about the dangers of seeking approval on social media starring Bryce Dallas Howard; and ‘San Junipero’, a romance about two people who meet in a virtual reality for the elderly.

It’s rare to find a Netflix series with an IMDb rating above 9, but Arcane manages to comfortably sit in the closest spot. The ideal example of a video game adaptation done right, Arcane is a massively popular animated series set in Riot’s League of Legends fictional world. It follows sisters Vi and Jinx, who find themselves on opposing sides of the clash for power and resources in the utopian city of Piltover and the seedy underbelly of Zaun.

With its stunning visuals, tear-jerking story, and characters that are impossible not to root for, anyone who has seen the show understands exactly why it deserves so much praise. It’s particularly beloved for the way it opens up League of Legends‘ sprawling universe in an approachable way, as even those who have never even heard of the game can enjoy the Netflix series.

NEXT: The 10 Most Watched Movies On Netflix, Ever