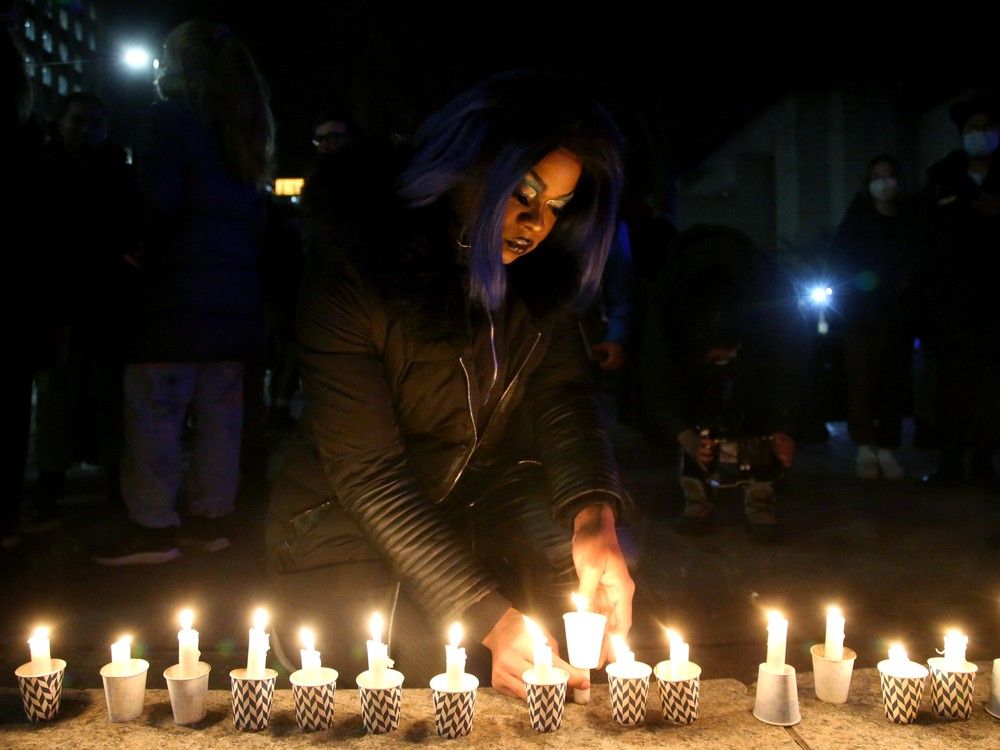 A handful of floral arrangements were placed on the steps of the Canadian Tribute to Human Rights monument Thursday evening as people gathered at a downtown Ottawa vigil for victims of a mass shooting last week at a gay bar in Colorado.

People accepted candles, lit them and stood silently by themselves or in small groups, listening intently as the names of the five victims were read aloud.

About 100 people in Ottawa heard remarks about the victims in the outdoor space next to the monument on Elgin Street, with the tributes and the candles in the evening darkness combining to create an appropriately solemn atmosphere.

The problem, those 100 people were told, is that people are getting too good at conducting these events because they happen too often; that there’s too much hate and too many people dying because of it.

“We imagine that we’re on an upward track of progress, but I have been doing queer and trans advocacy for over a decade now and it feels like we’re getting better at using the right words, but the everyday isn’t changing,” 2SLGBTQ+ advocate Fae Johnstone said afterwards.

“I still feel unsafe. I feel more unsafe now than I did seven years ago when I first came out as trans. That should be a staggering fact. We live in a world where a lot of us feel like no one is paying attention, where a government can put out a nice press release or give a little bit of funds and everyone is smiling, and the hate is still there. I think that’s where the rage comes from: the fact that we still have to do this.”

Johnstone — a trans woman, writer and executive director of the Wisdom2Action social enterprise and consulting firm — and others noted that Thursday’s Ottawa vigil wasn’t the first local one to follow a mass casualty tragedy in a gay bar in the United States. There was also one to mourn 49 people killed — 59 others were injured — at the Pulse nightclub in Orlando, Fla., in June 2016.

“These are the moments that get attention, but we have young folks who lose their lives, young folks whose every day is harassment in school and on the streets,” Johnstone said. “It’s almost like we’re always in vigil mode because the hate is always there, and a lot of the time the world just doesn’t notice it.”

Debbie Owusu-Akyeeah, executive director of the Ottawa-based Canadian Centre for Gender and Sexual Diversity, told the crowd she had been both tired “and full of queer rage” since early Sunday, when she heard news reports about the killings in Colorado Springs.

Many marginalized communities will have to continue to deal with that kind of violence, Owusu-Akyeeah added.

“We need to mourn our dead and fight like hell for our living,” she said.

Toby Whitfield, executive director of Capital Pride, which organized Thursday’s vigil, said it had been arranged in response to requests from people who work in local queer establishments and other community members for a space to reflect on the loss of life in Colorado Springs.

“It all speaks to why it’s still important for the 2SLGBTQ+ community and the broader community and allies to push for a more inclusive society because, at the end of the day, the folks that were in Colorado were trying to live their lives, go out for an evening, and, if they’re not safe to do it at that local bar, then where are they safe to?

“I think that’s kind of the thing that I’m reflecting on as someone that organizes events and programming and organizes the Capital Pride festival, and how important those spaces are for the queer community and how important it is that we continue to make sure there are safe spaces for people.”

The 22-year-old accused of being the shooter in Colorado Springs, Anderson Lee Aldrich, appeared in court Wednesday. According to U.S. media reports, Aldrich was ordered held in custody on preliminary charges: five counts each of first-degree murder and bias-motivated crimes — referred to elsewhere as hate crimes — causing bodily injury.

Formal charges, plus other counts, are expected at Aldrich’s next scheduled court hearing on Dec. 6, coincidentally the 33rd anniversary of the 1989 mass shooting that left 14 women dead at École Polytechnique de Montréal.