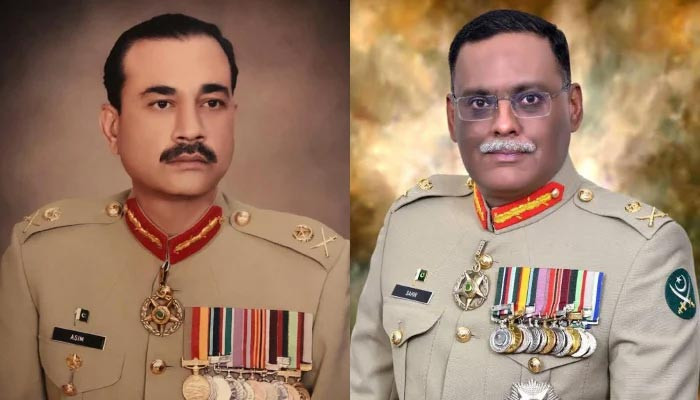 General Asim Munir and Gen Sahir Shamshad Mirza were officially notified on Friday by the federal government as the next chief of army staff and chairman Joint Chiefs of Staff Committee (CJCSC) respectively, said the notification.

President Arif Alvi ended the uncertainty surrounding key appointments in the military by signing off on the summary to appoint both the top military officers on Thursday.

As a result, incumbent CJCSC Gen Nadeem Raza will hang up his boots on November 27 and COAS Gen Qamar Javed Bajwa will retire on November 29, the notifications from the Ministry of Defence read.

“In exercise of powers conferred by Article 243(4)(b) of the Constitution […] read with Section 8A of Pakistan Army Act 1952, the president on the advice of the prime minister is pleased to approve the promotion of PA-25031 Lt Gen Syed Asim Munir […] to the rank of General with immediate effect and his appointment as Chief of the Army Staff for a period of three years with effect from 29th November 2022,” a notification read.

Following their appointments, politicians from both — the treasury and the opposition benches — congratulated the military officials and hoped that they would live up to the nation’s expectations.

Both the top military officials also held meetings with PM Shehbaz and President Alvi after the appointments to the high-ranking posts. The government officials wished them well for their new responsibilities.

The meetings were held at the Prime Minister’s Office and the Aiwan-e-Sadar, respectively.

Although the president approved the summary of appointments yesterday evening, there was uncertainty regarding the matter as it was not signed right after being sent to him by the president.

As the prime minister forwarded the summary to the president, he left Islamabad for Lahore to hold a meeting over the matter with PTI Chairman Imran Khan at Zaman Park.

All eyes were on the meeting as Khan, in an interview Wednesday night, had said that he and President Alvi would play “legally and constitutionally” on the matter.

Following the long meeting, the president left for Islamabad and PTI Senior Vice President Fawad Chaudhry said the President’s House would issue a statement on his meeting with the PTI chief — another statement that gave rise to speculations.

However, the president approved the summary without further hiccups by evening and also held meetings with both military officials later in the day.

Gen Asim Munir joined the Pakistan Army from the Mangala Officers Training School programme and then became a commissioned officer in the Frontier Force Regiment.

Following this, he was posted as Corps Commander Gujranwala for two years. Currently, he is serving as the Quarter Master at the General Headquarters (GHQ).

Gen Sahir Shamshad Mirza hails from the Sindh Regiment and served as the director-general of the military operations under former COAS Raheel Sharif.

Gen Mirza also supervised the operations against terrorists in North Waziristan and was part of the coordination group that oversaw negotiations with Afghanistan.

He was also a member of the Gilgit-Baltistan Reforms Committee. After becoming a Gen, Mirza was appointed as the Chief of the General Staff. Currently, he is serving as the Corps Commander Rawalpindi.

The matter of the army chief’s appointment is crucial in the current political scenario — with Khan striving to come into power again in opposition to the ruling coalition — has been a hot affair since the tabling of the confidence motion against Khan in April.

Outgoing COAS Bajwa was due to retire on November 29, 2019, at the end of his stipulated term, but was given a three-year extension in service by then-prime minister Khan on August 19, 2019.

There had been wide speculation about whether or not Gen Bajwa will seek another extension. However, the COAS indicated several months ago that he plans to retire this year.

This was also confirmed by the Inter-Services Public Relations (ISPR) at least a couple of times, while Gen Bajwa clearly stated twice on separate occasions that he had no plans to stay on the post.