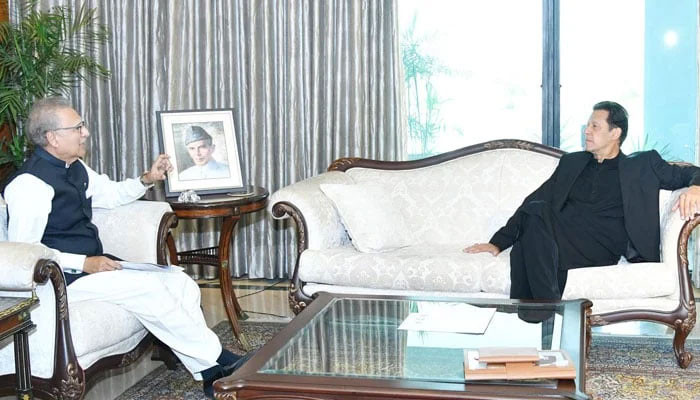 President Dr Arif Alvi was in Lahore to meet PTI Chairman Imran Khan at his Zaman Park residence for a consultation on the army chief’s appointment, Geo News reported.

Addressing a press conference, after the president’s departure, PTI senior leader Fawad Chaudhry said that the head of state and Khan discussed legal, political, and constitutional aspects of COAS’s appointment.

“Meeting between Imran Khan and President Arif Alvi lasted 45 minutes. President Alvi has left for Islamabad,” said Chaudhry outside the PTI chairperson’s residence. He added that the president and Imran Khan discussed the constitutional, political and legal issues regarding the appointment of the army chief.

“The President House will issue a handout in this regard between 6:30 and 7:00pm,” added Fawad. He added that the handout will also share details of President Alvi’s meeting with Imran Khan.

The president, who has received the summary for the appointments, has not yet signed it. It was reported that the president will take a decision after talks with the PTI chief.

Earlier, the PTI leadership — under the chairmanship of Khan — held a meeting to discuss the important appointments, sources told Geo News.

Sources said that the leaders who attended the meeting included Asad Umar, Shah Mehmood Qureshi, Fawad Chaudhry and others. They said that the senior party leadership was consulting over the matter before President Alvi’s arrival.

“The advice has gone to President Alvi. Now it’s Imran Khan’s test whether he wants to strengthen the institution of the country’s defence or make it controversial.”

The statement came in response to the PTI chief’s claim that he would be consulted once the summary was received and that he and President Alvi would “play within the law”.

However, according to sources, President Alvi — a key member of PTI — had said that he would not create hurdles in the appointment of the new top military officials.

“This is also a test for President Alvi if he will follow political advice or constitutional and legal advice. As the Supreme Commander of the Armed Forces, it is his duty to protect the country from political conflicts,” Asif added in his tweet today.

During a media talk in Islamabad following the federal cabinet meeting later, the defence minister said that all the matters had been settled in line with the Constitution.

The minister added that it was expected that President Alvi would approve the premier’s advice.

PTI will cause no obstacle in army chief’s appointment: Shibli

With all eyes on how PTI will respond to the development, former federal minister Shibli Faraz said on his party’s behalf that it wouldn’t create any obstacles over the army chief’s appointment.

The statement came in response to a question if there was a possibility that President Alvi would hinder the approval of the summary sent to him.

“PTI will not create any obstacles in the army chief’s appointment,” Faraz said.