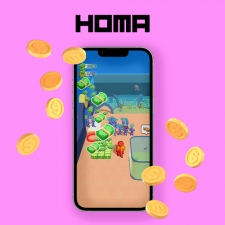 As a mobile game creator, you have come across hybrid games that mash-up different genres into one. One of these genres in the mobile gaming scene is Hybridcasual, which has recently seen proven retention & higher profitability.

Hybridcasual games take the best of both worlds: Hypercasual (HC) and Casual. This series of articles will unveil Homa’s perception of the genre as a separate category and reveal a winning formula for launching successful Hybridcasual titles.

Hybridcasual titles could be defined as ‘satisfying and accessible casual games,’ emphasising simplicity at the core of the games and depth of progression through casual features.

Another noteworthy mention is the hybrid monetization of the games. The game’s revenue is mixed Ad/In-app-purchases (IAP), with a heavy focus on IAP, taking at least 30 percent of the Lifetime Value (LTV).

So, whats’ in it for game creators?

Opportunities for developers: the best of both worlds

The hybridcasual genre offers great wins that game creators could leverage, like mass-market reach, longer retention, and higher profitability. In addition, the simple nature of the gameplay unlocks a bigger audience.

For example, at Homa, we compared the data from the four recent hypercasual & hybridcasual games. We could see that while the hypercasual games’ download number was higher, the newly released hybricasual titles are catching up quickly. We have seen a 700 percent increase in hybridcasual downloads from Q4 2021 to Q3 2022, reaching 66 million installs just a couple of months after the games were released.

On top of that, the casual depth & progression invite gamers to play longer, increasing the average retention of the titles. In addition, a more extended playtime and heavy IAP monetisation raise the profitability of these titles and boost the LTV.

But what are the challenges that you could face in this genre?

A winning formula to creating a successful Hybridcasual game.

There are three ways of building a hybridcasual game: hybridisation of a hypercasual game, hybridisation of the casual game & starting hybrid natively. Developers face tough daily questions: what KPIs to measure, how to market the game, and how to integrate IAP. Knowing where to start is a battle. Homa has come up with the answers to all these questions and scaled what worked best for Hybridcasual titles.

The first step is understanding the genre and its specificity. Unfortunately, a lack of materials for Hybridcasual makes it challenging for developers to get acquainted with it. Nevertheless, game creators can leverage Hybridcasual expertise and tech thanks to Homa’s dedicated support and ongoing development. We distilled all the necessary internal and external sources to build playbooks with actionable insights, where you will find best practices and guides for IAP, Hybridcasual game design, and player experience optimisation. Also, a dedicated team of Hybridcasual experts supports you along the game development journey.

The second step in building a successful title is mastering the IAP integration, with which many game creators need help. Homa has created templates for shops, collectables, and other IAPs to help game developers save time and use models that have already proven excellent performance. In addition, Homa Analytics allows developers to quickly dig into user behaviour and test game economies.

For instance, in Zombie Defense, Homa’s team tested over 10 economies, and the winning one led to a 10 percent LTV improvement. Thanks to the asset packs and the ongoing IAP design, the LTV for the game became 30 percent IAP-driven.

Third step – User Acquisition and Monetization (UAM). You need good technology and money to intelligently manage UA. At Homa, we have built the tech that can accurately project LTV maturation & take your games to the best-performing UA networks. On top of that, we use an extensive budget to make your games grow as soon as we are confident LTV > CPI.

Lastly, you can build on a community through IPs. According to a Newzoo report, IP-based mobile games attract high spenders. So you could drive more revenue to your games, create more experiences for players, & leverage the community around Homa’s characters. In addition, you could access the new world of the web3 tech stack we are developing.

To sum up, Hybridcasual games offer opportunities for both game creators and players thanks to their satisfying gameplay, engaging depth, and higher profitability. So it’s time to make the leap. You can learn more about the genre in the series of articles to come & submit your Hybridcasual game ideas to Homa Lab.