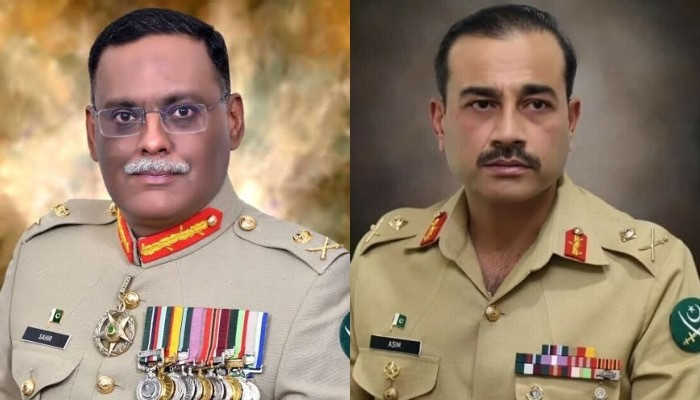 In a major development, President Dr Arif Alvi Thursday appointed Lieutenant General Asim Munir as the next chief of army staff of Pakistan while Lt General Sahir Shamshad Mirza has been appointed as the Joint Chiefs of Staff Committee (CJCSC).

Lt Gen Munir, who was also Pakistan’s chief spy, will take over from outgoing COAS General Qamar Javed Bajwa on November 29, who retires later this month after a six-year term.

COAS Gen Bajwa, who was appointed as the army chief in 2016, will retire on November 29. He was initially set to hang up his boots in 2019, but the PTI-led government gave him a three-year extension.

Taking to Twitter, Aurangzeb said that the summary for the appointments has been sent to President Arif Alvi.

Later, it was reported that Aiwan-e-Sadr has received the summary and a notification would be issued for the top two military slots after approval from the President.

Meanwhile, according to sources within Aiwan-e-Sadr, President Arif Alvi has flown to Lahore from Islamabad to meet and consult Imran Khan.

PM Shehbaz’s nominee for the army chief has also been retained by the federal government under the Pakistan Army Act, according to sources, as he was about to retire later this month.

In a media talk and tweet posted immediately after the announcement, Defence Minister Khawaja Asif said the “advice” over the appointments had been forwarded to President Alvi.

He expressed the hope that President Alvi wouldn’t make the appointments “controversial” and would endorse the advice of PM Shehbaz.

“All the matters have been settled in line with the Constitution of Pakistan and hopefully the president will not create a controversy,” Asif told reporters.

The minister refused to comment on PTI Chairman Imran Khan’s claim of consultation with President Alvi over the matter. He said that he has tweeted on the matter.

He said that the Pakistan Air Force, navy, and army shouldn’t be made controversial. Asif said that a detailed press release regarding the development will be issued.

“Now, its a test [for] Imran Khan if he wants to strengthen the national defence institution or make it controversial. It is also a test for President Alvi on whether he will follow political advice or constitutional and legal advice,” Asif wrote on Twitter.

President and I will act as per Constitution, law: Imran

PTI, meanwhile, shared a statement from party chairman Imran Khan, quoting him as saying: After the summary comes, I and the President of Pakistan will act according to the Constitution and laws.

Khan’s statement comes a day after he claimed that President Alvi was in contact with him and would consult him on the appointment of the top two slots in the military.

“I am in contact with the president over the summary related to a key appointment,” the PTI chief told an anchor of a private TV channel. “I am in touch with him (the president). He will discuss everything with me. The prime minister goes to an absconder so I am a party head. He will absolutely discuss [the matter] with me.”

PTI will cause no obstacle in army chief’s appointment: Shibli

With all eyes on how PTI will respond to the development, former federal minister Shibli Faraz said on his party’s behalf that it wouldn’t create any obstacles over the army chief’s appointment.

The statement came in response to a question if there was a possibility that President Alvi would hinder the approval of the summary sent to him.

“PTI will not create any obstacles in the army chief’s appointment,” Faraz said.

In response to the speculations that President Alvi might not ratify the summary from the prime minister, Federal Minister for Finance Ishaq Dar said that the government has a “Plan B”.

“The decision to appoint officers on both posts based on merit is applaudable. May God bless the ones who will take up new responsibilities,” he said in a statement.

He added that the appointments to the two top posts would be finalised by November 28. “If the president creates hurdles, then we have a Plan B.”

He said that both appointments could be done on different days as it wasn’t binding to make them both on the same day.

Lt Gen Asim Munir joined the Pakistan Army from the Mangala Officers Training School programme and then became a commissioned officer in the Frontier Force Regiment.

Following this, he was posted as Corps Commander Gujranwala for two years. Currently, he is serving as the Quarter Master at the General Headquarters (GHQ).

Lt Gen Sahir Shamshad Mirza hails from the Sindh Regiment and served as the director-general of the military operations under former COAS Raheel Sharif.

He also supervised the operations against terrorists in North Waziristan and was part of the coordination group that oversaw negotiations with Afghanistan.

Lt Gen Mirza was also a member of the Gilgit-Baltistan Reforms Committee. After becoming a Lt Gen, Mirza was appointed as the Chief of the General Staff. Currently, he is serving as the Corps Commander Rawalpindi.

The matter of the army chief’s appointment is crucial in the current political scenario — with Khan striving to come into power again in opposition to the ruling coalition — has been a hot affair since the tabling of the confidence motion against Khan in April.

Outgoing COAS General Bajwa was due to retire on November 29, 2019, at the end of his stipulated term, but was given a three-year extension in service by then-prime minister Khan on August 19, 2019.

There had been wide speculation about whether or not General Bajwa will seek another extension. However, the COAS indicated several months ago that he planned to retire this year.

This was also confirmed by the Inter-Services Public Relations (ISPR) at least a couple of times, while General Bajwa clearly stated twice on separate occasions that he had no plans to stay on the post.