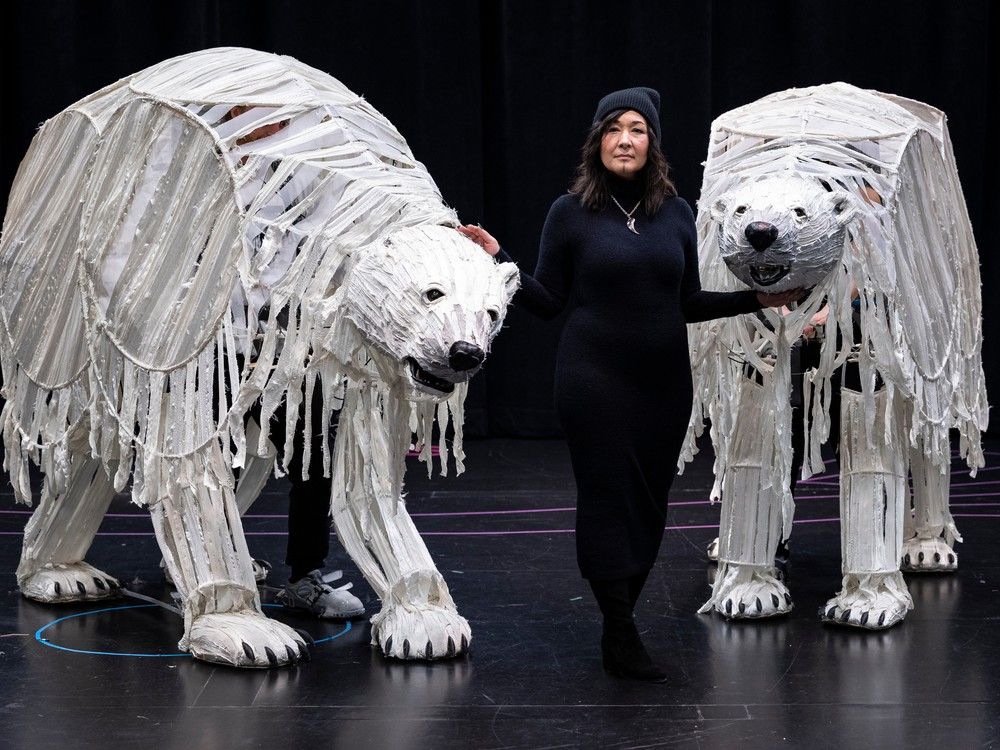 Reviews and recommendations are unbiased and products are independently selected. Postmedia may earn an affiliate commission from purchases made through links on this page.

The Breathing Hole, the play that opens at the National Arts Centre next week, is a dramatically different creature than the one that had its world premiere at the Stratford Festival in 2017.

While the basic tale remains the same – a three-act saga set in the Arctic that chronicles the adventures of a mythical one-eared polar bear over a time span of 500 years – and Inuk theatre artist Reneltta Arluk is back in the director’s chair, the spirit of it has been transformed.

“It’s definitely not a remount,” said Arluk during a break from rehearsals this week. “There have been a lot of changes.”

The most significant change is the language. Originally written in English by the award-winning Canadian playwright Colleen Murphy, the script was rewritten after its Stratford run, and, over the next three years, translated into Nattilingmiutut, an Inuktitut dialect spoken in Western Nunavut. Translation was completed by Janet Tamalik McGrath, with Nattilingmiutut language direction by Nilaulaaq Miriam Aglukkaq.

The new version, in English and Nattilingmiutut, was then published as a book, co-authored by Colleen Murphy and Siobhan Arnatsiaq-Murphy, and that’s the version being co-presented by the NAC’s English and Indigenous theatre departments.

“This dialect is only spoken in three very small communities in Nunavut so the fact that it’s left the region to come into contemporary life in the South is unprecedented,” said Arluk, noting the book is the largest published work of Nattilingmiutut syllabics. “A lot of important language work has been accomplished through this play.”

No less noteworthy is Arluk’s role. The 46-year-old actor-director from the Northwest Territories, who recently finished her term as Banff Centre’s Director of Indigenous Arts, was the first person of Inuk descent to direct at Stratford in its history, and the first Indigenous director at the festival in decades. She had never directed such an ambitious play, with a cast of almost two dozen, including the greatest number of Indigenous actors ever featured at Stratford, not to mention the two life-size puppets that represent Angu’ruaq, the polar bear.

“It was a lot of responsibility to be called in to do this work as an Inuk,” Arluk said. “It meant working with a lot of new (elements), a lot of firsts and a lot of pathmaking.”

Arluk was acting in a Montreal production of Pig Girl, the Colleen Murphy play inspired by the Indigenous women who met their fate at the hands of a murderous Port Coquitlam pig farmer, when she was first approached by Stratford brass to see if she’d be interested in directing The Breathing Hole.

She loved the draft, and its “impactful” depiction of the climate crisis, but had concerns about its cultural authenticity because Inuit peoples had not been consulted. “At a certain point we had to go to a larger Inuit collective so it’s not just me – one Inuit voice – giving feedback,” Arluk said.

A creative partnership was established with the Qaggiavuut Society, the Iqaluit-based performing-arts group, and one of the first things to be corrected was a scene in which polar bear meat was consumed raw – without regard for the infectious parasites it often contains.

“I had made many mistakes in my draft, like having the characters eating raw polar bear meat, something that in reality would have killed everyone by the end of Scene One,” Murphy wrote in a 2017 essay. “It was a stupid mistake because instead of checking on that point I just assumed all meat was eaten raw.”

Along with its dire message on the effects of climate change, the play contains moments of humour, including physical comedy, and is bolstered by the sound design of Carmen Braden, the brilliant young Yellowknife-based composer. With a cast of 16, selected partly for their fluency in their own dialect and their connection to the land, Arluk says the upcoming production will bring audiences into “the heart and spirit of this Inuit community.”

For her, the show is a milestone. Arluk, who is Inuvialuk-Dene-Cree, was born in the small town of Fort Smith, NWT and raised in the bush by her grandparents, who maintained a trapline. Although her grandfather was a storyteller, she had little exposure to the arts until she moved to the south. She was the first Indigenous woman to graduate from the University of Alberta’s BFA program in acting.

“I come from a place of cultural wealth, where we’re in positions of power and we’re a majority,” she said. “When you go down South, you realize that people really struggle to keep their culture. I started looking at it from a lens of loss, and wondering, ‘How can I keep our culture alive?’ I went through acting, which is the Westernized version of storytelling.”