HomePolitics newsEngland fan reveals what went on inside the £460m Qatari mansion on...
Politics news 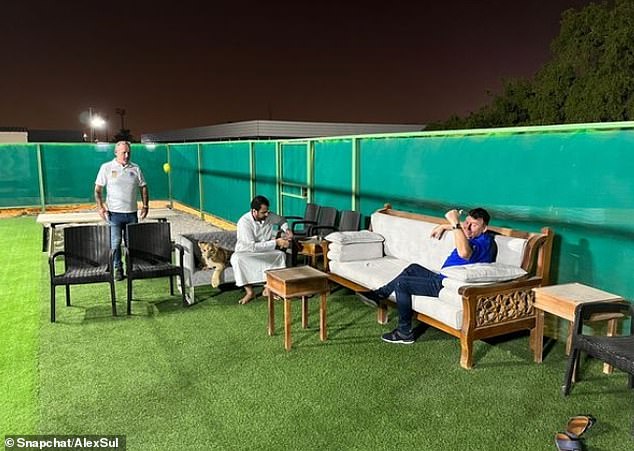 By Alastair Lockhart For Mailonline

An England fan has revealed what went on when he found himself ‘in a £460million palace with a lion cub’ on his first night out at the Qatar World Cup.

Alex Sullivan, 23, went out in Doha with his father Tommy and their friend John to ‘look for some beers’ at a supermarket when they claim to have met a member of the Emir of Qatar’s family.

After meeting the royal and his friends, the trio say they were invited for a drive in a Lamborghini back to the huge palace on the outskirts of the city, which included its own private zoo.

The father and son said they were apprehensive at first, but soon found themselves in the lap of luxury thanks to the hospitality of their super-rich Qatari hosts, who they said were ‘incredibly generous and hospitable’.

He claimed they were ‘down to earth and friendly,’ adding, ‘we had a really good conversation with them’.

Their story quickly went viral across social media as football fans around the world expressed their disbelief at the astonishing tale.

The group of England fans said they were invited back to a palace by a group of Qatari royals. The lion cub can be seen sitting on the sofa in the centre

Alex told The Mirror: ‘They were incredibly generous and hospitable and we had a great time. They had been asleep most of the day but they took us for a drive in the Lamborghini. I filmed that and also played with a lion cub.

‘He had his own personal zoo with the lion cub, various birds of prey and some monkeys. They are obviously very powerful people in business. The palace was worth about two billion Qatari Riyal [£460 million].

‘But they were so down to earth and friendly, we had a really good conversation with them.’

Alex posted a video of himself in the palace grounds with a lion cub on his first day in the country, to the amazement of those who were sceptical of their claims after they were revealed in an interview with TalkSPORT.

In one piece of footage, he can be seen walking up a driveway to what appears to be the palace.

He says: ‘We’re on a beer mission, trying to get beers back at the gaff and I’ve only managed to get us back to a f***in… a naughty one with Nawaf and Abdul-Aziz.

In another piece of footage he can be seen sitting outside under floodlights next to what appear to be a set of football nets with a group of men dressed in traditional Qatari thobes – long white robes – and headdresses.

Alex then sits down on a chair and begins petting and kissing a playful lion cub on a leash. ‘F***in’ mad,’ he exclaims.

John told TalkSport: ‘We met one of the sheikh’s sons and he took us back to the palace and he showed us, he had lions and everything.

‘They’ve made us so welcome and look around you, it doesn’t get any better than this.’