Kari Lake Visits Mar-a-Lago – Who Will Be Trump’s V.P. Pick? 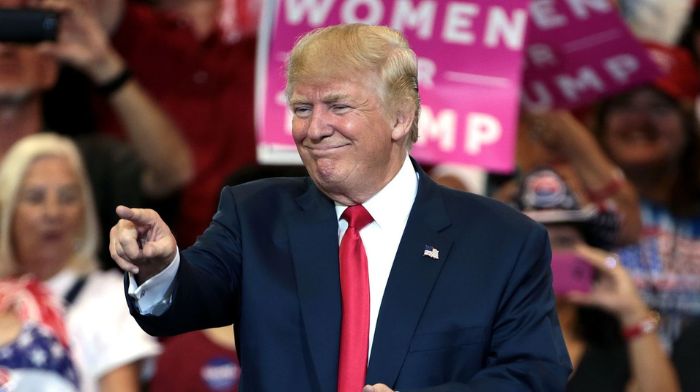 The Arizona governor’s race may very well go to a recount, so the results may not be known for a while. But whether she wins or loses, if Democrats think Kari Lake is going away quietly, there is a good chance they are sadly mistaken.

On Thursday, Lake made a trip to Mar-a-Lago, the Florida estate of former President Donald Trump. She was there to attend an event put on by the America First Policy institute, a think tank formed by several former members of the Trump administration.

Lake had previously said of Trump’s Presidential announcement, “[Trump has] my complete and total endorsement!”

With that announcement, Donald Trump will be eventually be looking for a running mate. The question is… who will that be?

He has my complete and total endorsement! pic.twitter.com/XwQoOOT1ei

Kari Lake is a newcomer to politics, but what a splash she has made. Lake spent 20 years as a news anchor in Phoenix before stepping down and running for Governor. Democrats, without thinking, usually telegraph who it is they are afraid of, and they are really afraid of Kari Lake.

Lake is no-nonsense, and calls out the BS when she sees it, a lot like Donald Trump. While she (probably) won’t pull off her own race, the GOP will need Arizona in 2024.

And having spent much of her adult life in the media, she knows exactly who and what they are, and she constantly beats them at their own game. Kari Lake should definitely be a consideration.

Having just left the Democrat Party, and having an independent streak, Tulsi Gabbard should also make the Veep consideration list.

Both Gabbard and Kari Lake would go far with that elusive “suburban women” vote, and Gabbard is also not only an Iraq War vet, she is also an active reservist, great experience to have in the arena of foreign policy.

Being so independent minded might be just the thing to balance out Donald Trump. She could attract more independent thinkers to the GOP ticket, and those who may not be totally sold on another Trump presidency.

While most presidential candidates try not to pick someone from their own state as a running mate, many people think Donald Trump and Ron DeSantis would be the GOP ‘Dream Team.’

His own possible Presidential aspirations aside, just one look at Florida under Ron DeSantis’ leadership, and it is easy to see why people are flocking to the Sunshine State to live.

The 2022 midterms saw Florida running the tables with GOP candidates, and seems to be as Republican as it has ever been. The ever crucial state of Florida would be in the bag as far as electoral votes with DeSantis as V.P. candidate.

While we may have to get through some nasty primary tussles between Trump and DeSantis should he decide to throw his hat in the ring in 2024, if he comes out on top, Trump would be crazy not to consider Ron DeSantis for the ticket.

Happy Veterans Day! Our veterans have made countless sacrifices to protect our freedoms.

In Florida, we are working hard to ensure they have the resources and support they need to be successful and take care of their families. pic.twitter.com/i27J3aOcNw

The junior Senator from South Carolina has also been mentioned often when discussing 2024 GOP candidates. As the Republican Party garners more and more of the African-American vote, Tim Scott on a GOP ticket would definitely make Democrats nervous about attracting black voters, their most reliable voting bloc.

Tim Scott would also be a great contrast to Donald Trump with his own life story of being raised in poverty by a single mother, and almost flunking out of high school before a mentor persuaded him to turn his life around.

His story confirms that, in America, no matter who you are, anything is possible. Scott would also be a great consideration.

Before 2024, many more well qualified V.P. candidates could emerge. For Republicans, it is a very good problem to have.