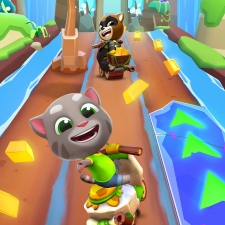 Outfit7, developers of the popular Talking Tom franchise have announced that their latest game will enter the brand into the runner game genre. Talking Tom Time Rush is already available for pre-registration on Google Play and App Gallery and is set to launch before the end of the month. It will include multiple worlds, customisation options and alternative paths to explore to flesh out the game world.

CEO of Outfit7 Xinyu Qian said about the announcement “With Talking Tom Time Rush, we wanted to create a new gaming experience that would be fun for everyone. Whether you’re a dedicated gamer looking to get the highest scores, or someone just looking for a fun run, there’s something for everyone in this game.”

Talking tom runs for it

The original Talking Tom game was a relatively innocuous ‘cute animal’ style game, where the simple gimmick was that users would speak phrases into their phone and Tom would then repeat it back. Since then however the franchise has, like many forerunners of the current mobile gaming craze, exploded in popularity and expanded on its original format, going on to become the #1 mobile IP of the last decade according to some metrics. The game is not the first to break with the traditional format in favour of a runner game.

The decision to further pursue taking the Talking Tom franchise into an endless runner game indicates an awareness on Outfit7’s part that the genre is becoming increasingly popular. As we recently included on our site, the runner game has evolved over the years including into its latest form, the gate runner, but has endured in popularity since early versions such as Temple Run. Judging by the decision to further flesh out the game world, Outfit7 are clearly angling for a long life-cycle for this game via a wealth of optional content and customisation.