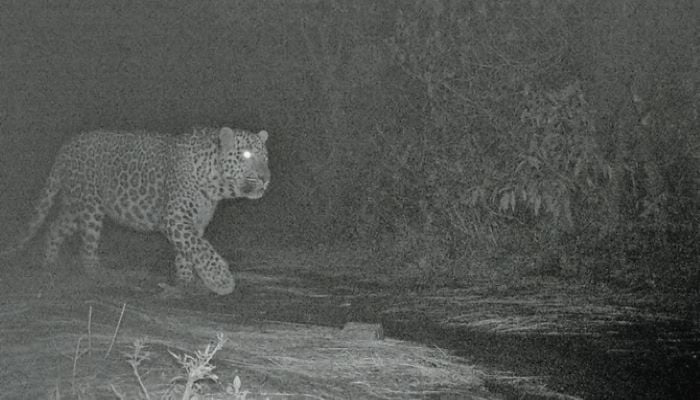 ISLAMABAD: Around four common Asian leopards, in a rare appearance close to human habitation, intruded on Thursday evening Saidpur village located next to the protected area, and hunted a goat, causing panic among residents.

Announcements were made through mosques requesting people to remain indoors, Geo News reported.

The Islamabad Police spokesman said that in case of any emergency, information can be shared at the 15 service.

The Islamabad Wildlife Management Board (IWMB) staff rushed to the spot to ensure protection of the masses and the endangered wild cats after it received the information that few leopards were spotted inside Saidpur village at 7:30pm, an IWMB staffer on ground told APP while sharing details of the incident after a small clip of leopards made the rounds on social media.

The video, only a few-seconds-long, was made by locals. It showed a leopard and a crowd of locals throwing spotlights on the wild cat.

He said residents had gathered on the spot like “spectators of a fun fair” which was risky as the wild animal could have been provoked by the sounds of hooting and attacked.

He brushed aside media reports of more than half a dozen goats and cows being killed by the wandering leopards, saying they had attacked a single goat and left it after residents created noise to flee the cats.

The IWMB official said the area residents were reluctant to leave the spot so that the leopards could also go back to their habitat. “I had requested the Islamabad Police mobile on patrol to disperse the gathered crowd but they didn’t pay heed to it and left the spot.”

The leopards, however, left the spot after a while and no person was harmed, he said, adding, “the leopards have not intruded in the human settlement rather humans have encroached into their habitat as the leopard attacked the goats in a newly built dwelling by the residents which is illegal and within the national park.”

When contacted, the Kohsar Police Station officials said that the police troops were deployed on ground to protect people in Daman-i-Koh which is in Saidpur village’s vicinity.