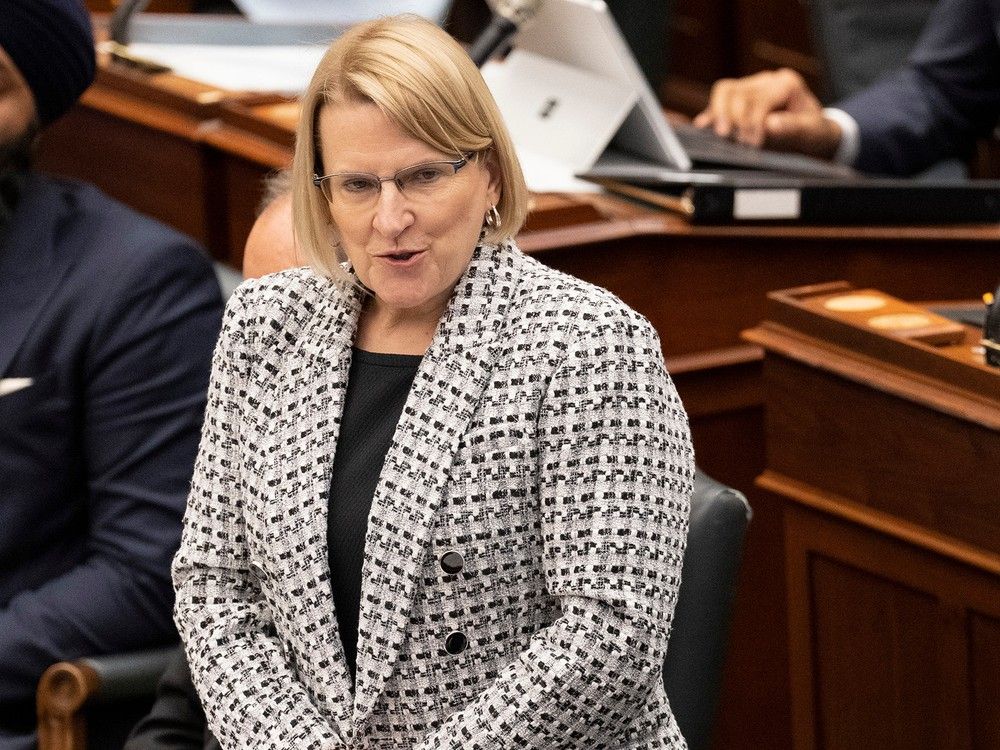 Ontario’s Health Minister Sylvia Jones attempted to reassure parents on Thursday that their children would get timely health care amid an unprecedented surge in viral illnesses that has forced children’s hospitals to postpone some surgeries and treatments.

When asked what she would say to parents waiting hours with their children in hospital emergency departments — which are seeing record numbers of sick kids, in some cases — Jones replied: “I would say I completely understand your distress and concern but you have a government that has your back and is supporting investment in the hospital system.”

The children’s health system in Ontario and across the country has been strained by a surge in COVID-19, influenza and RSV (respiratory syncytial virus), which are hitting young children especially hard and overwhelming pediatric intensive care units and emergency departments. Some parents have said they feel abandoned by the province and want mask mandates reinstated to reduce transmission.

Jones has also said the rate of increase in respiratory illnesses driving the surge in pediatric hospitalizations appears to be slowing down.

Jones did not directly answer a reporter’s question Thursday about occupancy rates in pediatric intensive care units across the province, saying only that it has been expanded by 30 per cent in recent weeks.

CHEO and other children’s hospitals have been forced to postpone some surgeries and treatments because their intensive care units are overflowing. In the past week, CHEO’s ICU capacity has been as high as 185 per cent, according to a tweet from hospital President and CEO Alex Munter. Seven children had to be resuscitated in the emergency department Sunday and Monday.

Jones was at Toronto’s University Health Network to announce a provincial investment of $182 million for upgrades, repairs and maintenance at 131 hospitals and 65 community health-care facilities to improve ventilation and replace roofs and windows, among other changes.

She said an extraordinary level of collaboration within the health system has helped children’s hospitals cope with the severe respiratory viral season. She noted that a couple of patients from CHEO were transferred to Kingston for care to take pressure off the pediatric hospital.

“When pediatric hospitals need help, we have other hospitals stepping up.”

Jones said the province had expected a surge in viruses “and took steps to prepare.”

She cited the creation of a second pediatric intensive care unit at CHEO as an example of innovation and of making sure there were “preparations in place” for the difficult viral season.

CHEO’s second pediatric intensive care unit was not opened in advance of the wave, as Jones suggested, but in response to it, according to a press release from the children’s hospital at the time.

On Nov. 9, CHEO thanked the Ministry of Health for funding “which makes it possible for us to respond” to the worsening situation.

The CHEO press release said the new PICU would address the overflow of critically ill babies and young children at the hospital.

“Over the past few weeks, CHEO has seen an early arrival of the peak viral season driven by acute viral respiratory infections including RSV, flu, COVID and other viruses. These are at levels never before seen in CHEO’s 48-year history.”

Jones echoed the province’s Chief Medical Officer of Health Dr. Kieran Moore’s advice earlier this week that Ontario residents need to “get back to basics” when it comes to protecting themselves from potentially serious viruses.

That includes getting COVID and flu vaccines, screening themselves daily for symptoms, staying home if sick, practising good hand hygiene and wearing a mask in crowded indoor settings.

Earlier this week, Jones defended the majority of Progressive Conservative MPPs who did not wear masks in the Ontario Legislature after Moore had strongly recommended it. Jones, who did wear a mask, said they were making a “personal choice.”

Jones acknowledged the health system is being further challenged by staff shortages, but added: “the innovation, the cooperation between hospitals really is unprecedented. I am very proud of that.”

She also said primary care providers must begin seeing patients in person to take some pressure off the hospital system.

“We have a robust system when all players are working together. We need all parts to operate at 100 per cent.”

“Parents are waiting for reassurance from the government that their children will receive timely support from fully staffed hospitals. Contrary to her claims, Jones denied parents that reassurance today.”

She noted there was no additional money for health care in the province’s economic update this week.

With files from The Canadian Press