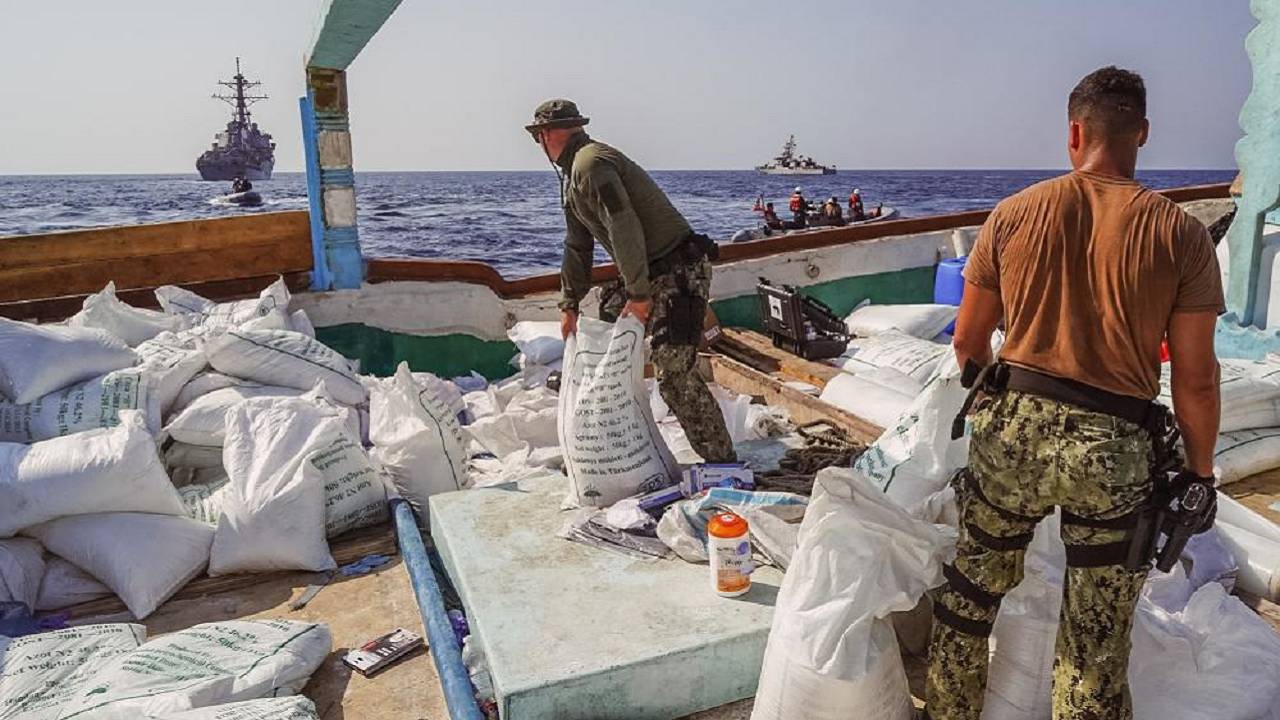 Enough material to fuel more than a dozen medium-range ballistic missiles has been intercepted by the U.S. Navy on a fishing vessel heading from Iran to Yemen.

The massive amount of explosive material was seized by the U.S. Naval Forces 5th Fleet on Nov. 8 while the ship was traveling along a route used to send weapons to the Iran-backed Houthi rebels in the war-torn country.

“The unlawful transfer of lethal aid from Iran does not go unnoticed,” Vice Adm. Brad Cooper, commander of U.S. Naval Forces Central Command, U.S. 5th Fleet and Combined Maritime Forces, said in a statement. “It is irresponsible, dangerous and leads to violence and instability across the Middle East.”

The 5th Fleet said the vessel was intercepted by the U.S. Coast Guard ship USCGC John Scheuerman and guided-missile destroyer USS The Sullivans.

The U.S. 5th Fleet removes explosive material found on board a ship traveling from Iran to Yemen.
(U.S. 5th Fleet)

While on board, “forces discovered more than 70 tons of ammonium perchlorate, a powerful oxidizer commonly used to make rocket and missile fuel as well as explosives,” according to the U.S. 5th Fleet, which added that it was the first time it has intercepted the material.

The U.S. 5th Fleet says it found “more than 70 tons of ammonium perchlorate, a powerful oxidizer commonly used to make rocket and missile fuel as well as explosives,” on board the fishing vessel.
(U.S. 5th Fleet)

The raid also netted more than 100 tons of urea fertilizer, a chemical compound which can be used to make explosives.

U.S. forces sank the vessel on Nov. 13, determining it a hazard for commercial shipping. The four crew members operating it were returned to Yemen two days later during an at-sea exchange in the Gulf of Aden with the Yemen Coast Guard.

Liz Friden is a Pentagon producer based in Washington, D.C.