IT’S NOT ENOUGH: Senators fall short at home against Islanders 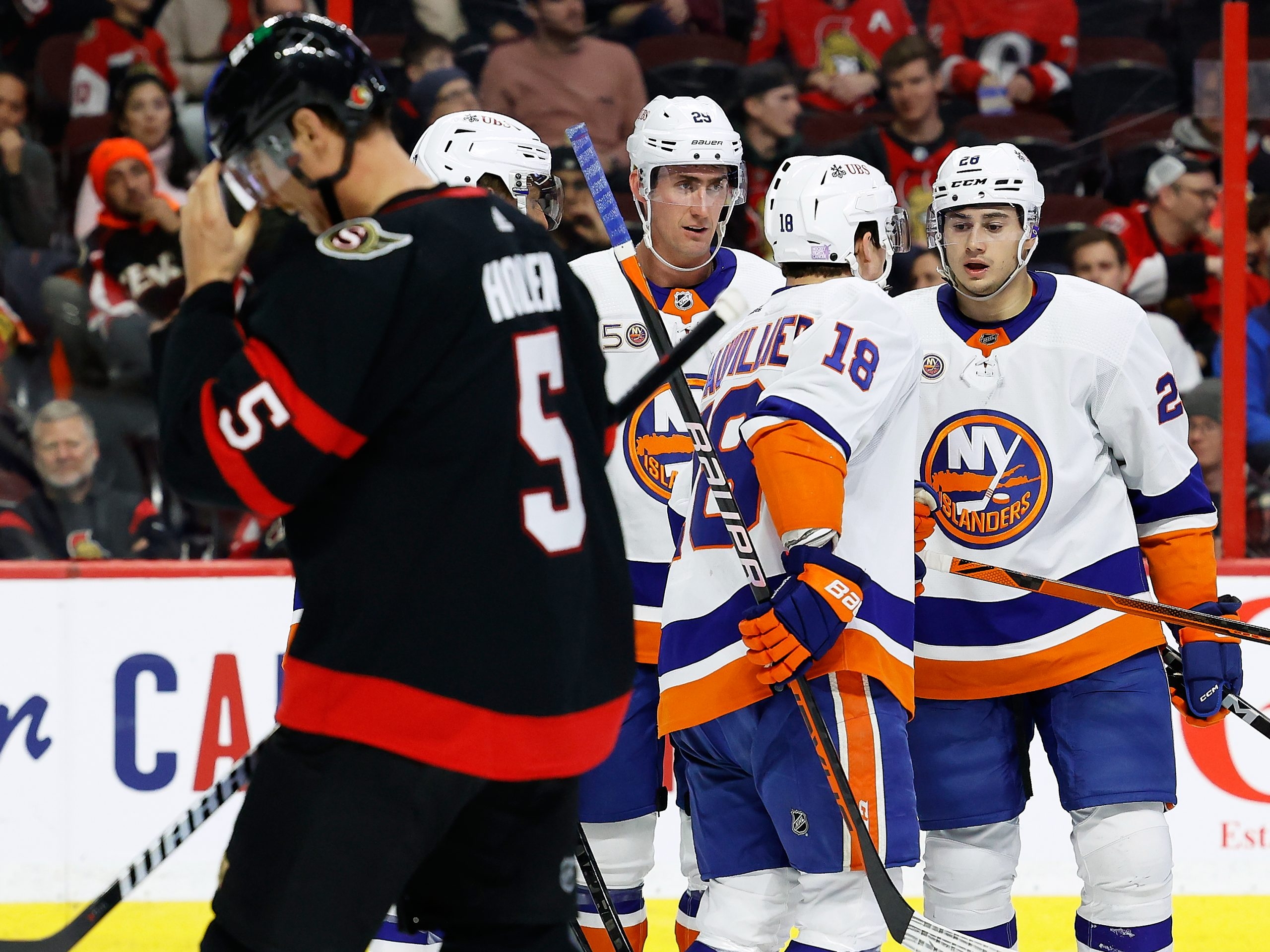 With the best player in Ottawa Senators modern-day history being inducted into the Hockey Hall of Fame on Monday night, the home team did what they’ve done way too often this NHL season: Lose.

While the Senators had stopped a seven-game losing streak with a 4-1 win in Philadelphia on Saturday, they fell 4-2 to the New York Islanders in a 5:30 p.m. start Monday. It’s now eight losses in their past nine games. The effort was there. The excuses: Injuries, more bad puck luck and an Islanders team that is positionally sound, clogging up the middle in its own zone.

Are the players on this roster good enough? Is the coaching good enough? Does the team need general manager Pierre Dorion to step up and find trade solutions? All good questions. There’s no time for maybes or what-ifs, though, as the team tries to figure things out and play its next game Wednesday at home against the Buffalo Sabres.

“It’s tough,” said Senators coach D.J. Smith. “I thought we had lots of chances, good legs. Against a team that’s really defensive and doesn’t give you much, I thought we created a whole bunch. At the end of the day, it’s special teams. They score two, we score one. That’s how you lose.

“I think we had (confidence) going into the game; I think we had it all the way through. When we go back and look at this, we’re going to have the puck a lot. Give (the Islanders) credit, that’s what they do – keep the puck out of their net.”

Some of the fans in a half-full Canadian Tire Centre hung around to watch on the big screen the induction of former captain Daniel Alfredsson into the Hall of Fame. Others left the building with an all-too-familiar empty feeling.

The off-ice news isn’t good, with the team’s top defence pair sidelined. Thomas Chabot will be out for at least a week while he is in concussion protocol. And while Artem Zub has been skating, he’s behind schedule in his rehab and won’t be available for the next few games. The good news: Jake Sanderson is stepping up in a big way. Monday, he was on the ice for more than 25 minutes.

“Chabby’s out so guys have to step up,” said Sanderson. “I’m fine with playing more; whatever the team needs to win. It’s obviously frustrating (losing). At the same time, we’re playing good so it’s stuff to build on. We know we’re a good team. We just have to stay positive.”

“(Sanderson has) been great for us all year,” said Claude Giroux, who had a goal and an assist. “Coming into camp, I didn’t know what to expect. He plays a mature game, he’s a very smart hockey player. I’m not surprised he’s playing some good hockey right now.”

Making his debut for the Senators was defenceman Jacob Larsson, a former NHL first-round draft pick (27th overall in 2015, Anaheim), who came in with 165 games of NHL experience. He played a limited role, with 11:05 of ice time.

The Islanders took a 1-0 first-period lead. With Austin Watson in the penalty box for cross checking, Oliver Wahlstrom rifled a wrist shot past Cam Talbot from the top of the faceoff circle.

The Senators got a couple of whacks at the puck from in close with about three minutes left in the first period, but couldn’t knock it past Islanders goalie Semyon Varlamov. There was another flurry of Ottawa chances in the final minute, but again, nothing to show for it.

We apologize, but this video has failed to load.

With New York’s Kyle Palmieri off for a tripping penalty early in the second period, the Senators moved the puck around well in the Isles’ zone. But the best chance came for the short-handed Islanders, with Casey Cizikas stopped by Talbot.

Ottawa’s Parker Kelly snuck in behind the Islanders defence and took a pass, but his shot went over the net.

The Islanders took another penalty, 7:11 into the middle period, with Ross Johnston sent off for roughing. It became a two-man advantage when Scott Mayfield was given a double minor for high sticking. It didn’t take long for Ottawa to tie the score, with Drake Batherson finding the net with a one-timer.

The Islanders took a 2-1 lead on a Noah Dobson wrist shot that ricocheted past Talbot.

With Mathieu Joseph in the penalty box for high sticking, the Islanders made it 3-1 when former Senator Jean-Gabriel Pageau took a rebound and knocked a backhander past Talbot.

The Senators made it 3-2 with 6:52 left when Giroux took a backhand pass from Brady Tkachuk and scored from Varlamov’s right. It woke up the crowd. Ottawa pressed in the final minutes, but it was New York that got the next goal, with Brock Nelson scoring into an empty net with 1:10 left.

“We did a lot of good things,” said Giroux. “We had a lot of good chances. I thought we were going to come back and tie it up. It’s definitely frustrating because we needed this win. We want to be a hard team to play at home.”