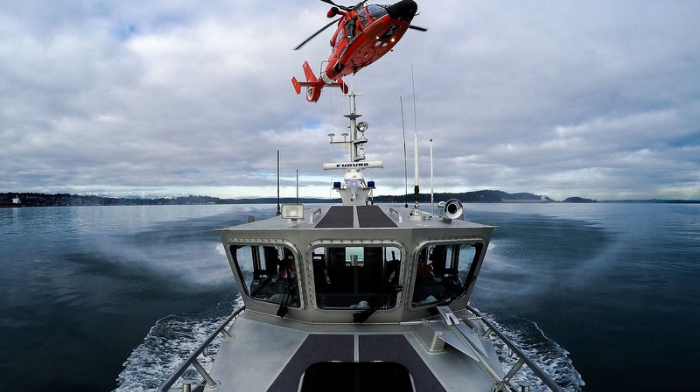 As Hurricane Ian rocked the state of Florida, as with most natural disasters that impact our communities, American heroism tends to shine bright. Often that heroism comes from service members, and in the case of hurricane disaster relief and rescues, you can always count on the men and women of the United States Coast Guard to come through.

This latest storm was no exception, with various tales of heroism, including that of Aviation Survival Technician Second Class Zach Loesch. At one point, he saved an elderly disabled woman from drowning by kicking down her door to get her to safety.

As if that wasn’t enough, he was conscientious enough to grab her wheelchair and strap it to his body before being airlifted to safety. This is just one of the many reasons Mr. Loesch received praise from the President Biden himself.

Still, there’s just one problem: Loesch is set to be involuntarily discharged from the Coast Guard.

Joe Biden said it himself — COVID is over.

Yet, he is still firing our brave men and women who serve our nation, like Coast Guard Rescue Swimmer Zach Loesch.

Zach kicked through a wall to save an elderly couple trapped due to Hurricane Ian.

Thanks, But No Thanks

In a White House press release last Friday, it was announced that the President had spoken to Loesch as well as another Coast Guard officer involved in the rescue, in order to personally thank them for their valiant efforts in response to Hurricane Ian.

More specifically, President Biden told reporters regarding his conversation with Loesch that “I told him how proud I of him I was and thanked him for all the work he and his Coasties are doing to save lives.”

You’d think we’d want to retain that commitment to service and fellow man. Unfortunately, we will be losing many like Loesch thanks to the military COVID-19 vaccine mandate. In the next month or so, he is set to be removed from the military due to his refusal to get the vaccine.

I read that Biden just called a coast guard rescue swimmer to thank him for saving lives, but that hero is due to lose his job shortly due to Biden’s Covid vaccine mandate. Don’t be desensitized to the horrific discrimination that’s still being perpetrated in the name of science.

Like many others in uniform, Loesch filed for a religious accommodation to the vaccine, which was denied along with his appeal. Currently, there are 2,632 Coast Guardsmen are refusing to comply with the mandate.

The ones that were approved were for members who were already pending separation or retirement. To put it plainly, only members who already had a pending discharge date have gotten their requests approved.

Sound familiar? It should. As reported just a few weeks ago, the other military branches had to roll back some of their COVID vaccine restrictions pending litigation and similar accusations.

Our military is experiencing its worst recruiting year ever thanks in part to @SecDef‘s military COVID vaccine mandate.

Even though the mandate is clearly damaging military readiness, it remains in effect.

They would rather degrade our military than admit they were wrong. pic.twitter.com/J8N0ms7qix

Related: With Military Recruitment In The Red, Will ‘Top Gun: Maverick’ Provide The Same Bump As The 1986 Original?

In June, Pentagon Inspector General Sean O’Donnell, in a memo to Secretary of Defense Lloyd Austin, stated that “We found a trend of generalized assessments rather than the individualized assessments” required by not only Federal law, but also the Pentagon’s own policies.

“Assuming a 10-hour work day with no breaks or attention to other matters, the average review period was about 12 minutes per each package,” the memo pointed out.

It is hard to believe that 12 minutes would be enough time to assess each individual’s request accurately. The reality is those reviewing these packages probably did take breaks and have other obligations, meaning they spent even less time reviewing each case. Given the mathematical assumptions, the IG said they estimate about 50 denials were given per day across all the branches.

Lieutenant Junior Grade Alaric Stone, one of the litigants in the lawsuit against the Coast Guard, said that “I find myself in a situation where I am being forced to choose between my faith and service to my country. It’s truly heartbreaking.”

“If I had asked any of the people I saved yesterday if they wanted to come with me even though I am unvaccinated, every single one of them would have said yes,” said Loesch.

Of that, I personally have no doubt. But, to be fair, military members have been required to get numerous vaccines for various illnesses, all in the name of readiness.

I’ve been stuck with more than I can count without complaint. However, the religious accommodation request process for this particularly controversial vaccine does seem to be stacked against those who file.

With military recruitment at an all-time low, you’d think we’d be looking for ways to keep our best and brightest versus discharging them over a vaccine—especially given all the international challenges we face and domestic challenges like tropical storms.

I also can’t imagine a higher honor than to receive a phone call from the Command in Chief himself to thank you for your heroism and service.

What a monumental career and life moment, one you tell your grandchildren about when the time comes. However, as Mr. Loesch said, “It just sucks that he thanked me, yet the vaccine mandate is what’s kicking me out.”

You are absolutely right on that point; it does suck.

Zach Loesch is one of 2,600 Coasties that despite being sent to help stranded Floridians, will be kicked out over a vaccine.

I guarantee not one Floridian cared about his vaccine status when he carried them out of their flooded home. Biden’s mandate must end! pic.twitter.com/tRcREyTQLc