HomeVideoWhy Showing Rhaenyra & Alicent's Friendship Is Necessary in House of the...
Video 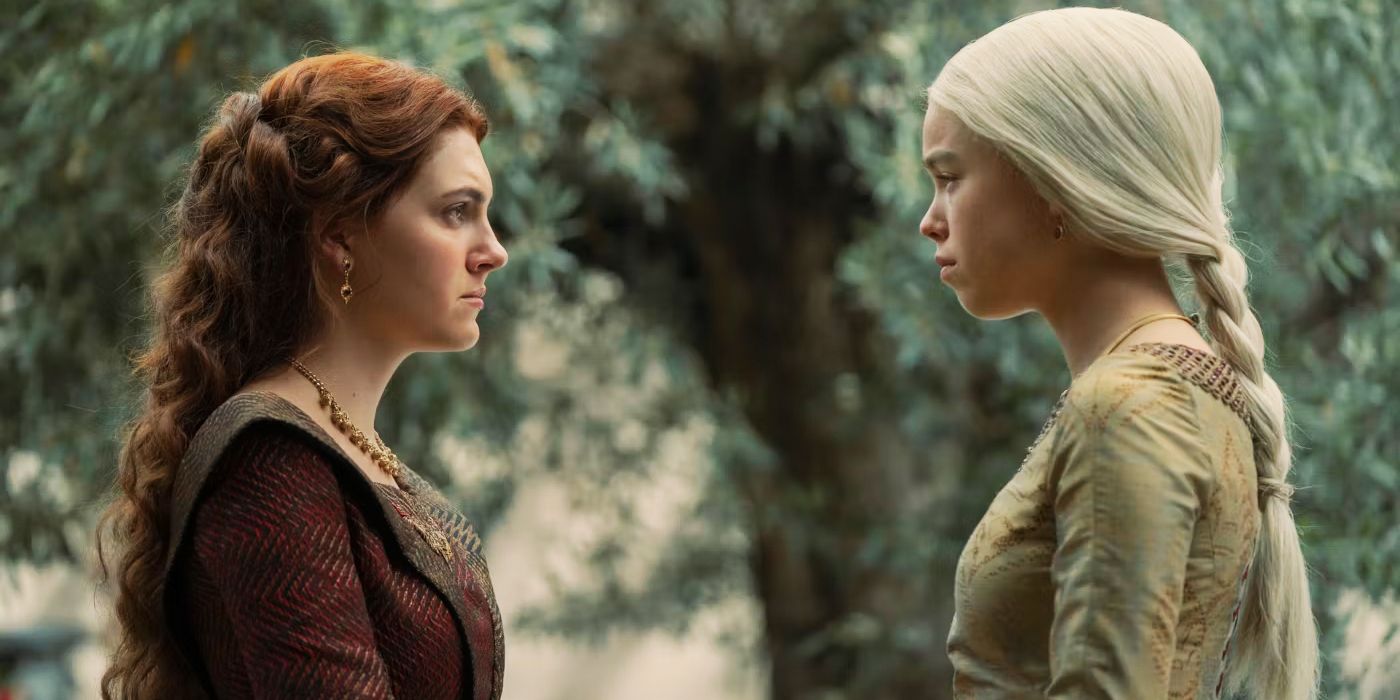 Editor’s Note: The following article contains spoilers for Episode 1-5 from House of the Dragon and for the book Fire & Blood.When House of the Dragon started airing, many fans of the source material Fire & Blood quickly pointed out the key differences between the book and the show. While some changes were questioned, many made sense in adapting a story told through different perspectives and unreliable narrators. One of the key changes in the show was the addition of the friendship between Rhaenyra Targaryen (Milly Alcock) and Alicent Hightower (Emily Carey). Their friendship became the center of most of the conflict since the beginning of the series. This addition added a backbone to the conflict between the two characters and adds layers of depth to the upcoming war between these two women.

In Fire & Blood, the story of the Targaryan civil war – also known as the Dance of the Dragons – is told through multiple accounts of the events and uses fictional unreliable narrators. It is not told like A Song of Ice and Fire through novels that alternate between characters’ points of view but instead acts like a book that could exist in Westeros as a historical piece of writing. And so, because of that, the show had a lot of liberties regarding adapting the text.

When the series starts, Alicent and Rhaenyra are two young girls in King Landing, having grown up together at the Red Keep. This is where the first significant difference between the book and the show appears. While Rhaenyra and Alicent are the same age in the series, that is not the case in the book. When the show starts, both Rhaenyra and Alicent are 14 years old, while in the book, they not only have a nine-year age gap but Alicent is said to be 18 years old when she marries Viserys in the book while Rhaenyra was only nine years old.

While the animosity between Alicent and Rhaenyra is very much at the core of the civil war that would lead to the near extinction of the Targaryen bloodline, it is never given context outside of “they do not like each other.” The show takes a more exciting route and gives the writers many options on setting up the upcoming war. By making the two characters the same age, House of the Dragon can cultivate this friendship between them that was not present in the novel.

Rhaenyra and Alicent were portrayed as best friends who simply wanted to break away from the convention in front of them. The first episode made it clear that their bond is strong, both needing and leaning on each other in times of need. There have been a lot of talk about the romantic undertone that the relationship had towards the start of the series, with Emily Carey herself talking about it in interviews where she admits that while they did intentionally play it that way, it as more about the fact that at that formative age, knowing the difference between a romantic or platonic relationship can be difficult.

RELATED: What is the True English History Behind ‘House of the Dragon’?

The Breakdown of Their Friendship Starts When Alicent Marries Viserys

But at its core, the relationship was also of two young women who wanted to break free of their worlds and were broken apart by their fathers and their fathers’ ambitions. Rhaenyra and Alicent breakdown of their friendship is a response to their environment. Her father, Otto Hightower (Rhys Ifans), makes Alicent visit Viserys (Patty Considine) after his wife’s death to form an emotional connection with him, and she has no real choice but to marry him and give him children. By the end of the show, she might become the villain in the eyes of many, but she is a product of her father’s ambition at the beginning, a pawn with no say in what she wants.

And on the other hand, you have Rhaenyra, who never forgives Alicent – or her father to a lesser extent – about not only the marriage, but the clear implication that her best friend hid the fact that there was a start of a relationship with her father. The moment Viserys states that he will marry Alicent, it is the start of the breakdown of their relationship, one that is based on Rhaenyra feeling betrayed.

Alicent Breaks Their Friendship When She Arrives in Her Green Dress

With the reveal of Criston Cole’s (Fabien Frankel) affair with Rhaenyra, Alicent becomes the person the book describes. The idea is that Rhaenyra might have slept with someone before marriage and lied to Alicent about it breaks them apart. The moment Alicent arrives at the wedding wearing her father’s house color, green, she picks her side and fully dissolves any friendship that might have lingered between her and Rhaenyra.

Creating this friendship and giving background to what will unfold following the ten-year time jump in Episode 6, House of the Dragon adds more to the animosity between Alicent and Rhaenyra. While Alicent can still be perceived as a villain, there is context. Before, in the book, Alicent was nothing more than a power-hungry woman who wanted to put her son on the throne. Alicent is more fleshed out and a product of her father’s ambitions; she isn’t just power hungry, there is much more there.

And this is where the idea of what could have become a romantic relationship – or perceived as one – is fascinating. Because both Alicent and Rhaenyra’s actions will lead to the start of the fall of their bloodline, or the Targaryen dynasty, these were two young women who were torn apart and reacted the only way they knew. While a lot is happening on the show, and many other actions have implications regarding the upcoming civil war, one thing is clear. The breakdown of the two teenage girls’ friendship is at the core of it all, the start of it all, because if Viserys simply did what many believed was the right choice and married Laena Velaryon, then maybe, the Dying of the Dragons would never have had happened.