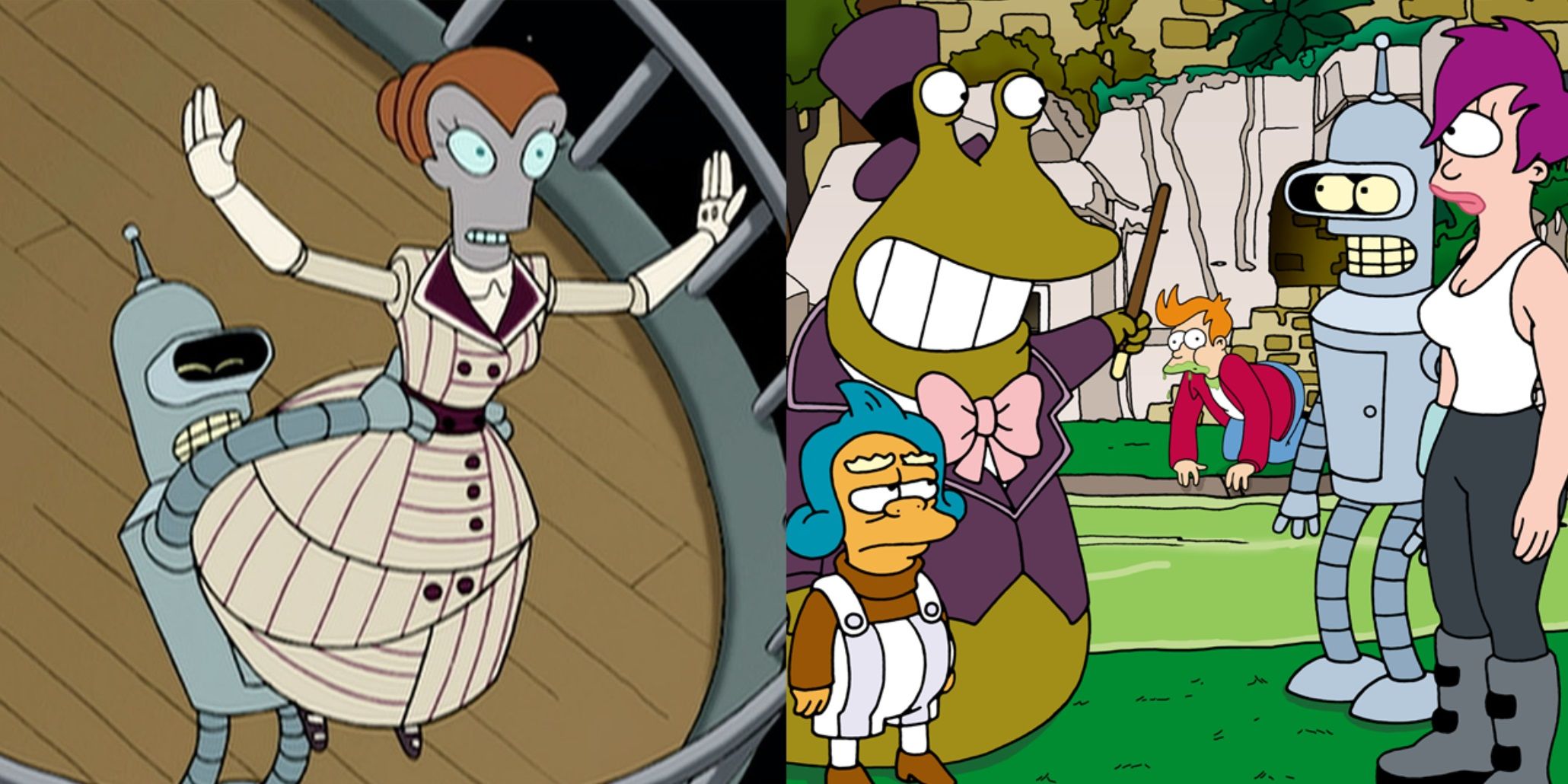 Matt Groening and David X. Cohen’s Futurama has put a fun comedic spin on countless science fiction tropes. This has included references to a bunch of classic movies. The show has lampooned scenes from sci-fi hits like E.T., The Matrix, and 2001: A Space Odyssey and put a sci-fi twist on non-sci-fi movies like Titanic and Animal House.

From the doomed maiden voyage of the Starship Titanic to the Planet Express ship’s HAL-style sentient artificial intelligence to Fry’s tour of the Slurm factory led by a Willy Wonka-esque tour guide, Futurama is full of great movie parodies.

10 Fry And The Slurm Factory

In the season 1 finale, “Fry and the Slurm Factory,” after using one of the Professor’s inventions to locate a golden bottlecap, Fry wins a tour of the factory where his favorite soda is made. This paves the way for a delightful spoof of Willy Wonka & the Chocolate Factory.

The tour guide, Glurmo, is dressed in a Willy Wonka-style outfit and his voice is practically a Gene Wilder impression. Grunka Lunkas take the place of Wonka’s Oompa Loompas.

In the season 7 episode “Near-Death Wish,” the Planet Express crew learns that Professor Farnsworth’s parents are still alive and living in a futuristic nursing home: an artificial satellite called the “Near-Death Star.” Aboard the Near-Death Star, the elderly passengers are plugged into pods that keep them entertained with a virtual reality simulation.

These pods and the virtual reality they immerse their users in are a hilarious reference to the Wachowskis’ sci-fi action masterpiece The Matrix.

8 Armageddon With A Big Ball Of Trash

The season 1 episode “A Big Piece of Garbage” reveals that in the futuristic world of Futurama, humanity responded to its trash problem by balling up its garbage and shooting it into space. The conflict of the episode sees this ball of garbage returning to Earth to cause a catastrophe.

This storyline is a direct nod to Michael Bay’s Armageddon – except, instead of an asteroid, the human race is threatened by a giant ball of trash.

The “Anthology of Interest” episodes are Futurama’s answer to The Simpsons’ “Treehouse of Horror” Halloween specials. Each installment follows three alternate realities conjured up by Professor Farnsworth’s What-If Machine. In “Anthology of Interest II,” Leela asks the machine what would happen if she found her true home.

However, she bumps her head and dreams up a parody of The Wizard of Oz instead. Leela plays Dorothy, Nibbler plays Toto, Fry plays the Scarecrow, Bender plays the Tin Man, Zoidberg plays the Cowardly Lion, Amy plays Glinda the Good Witch, and the Professor plays the Wizard.

Fry goes back to college in the season 1 episode “Mars University.” He ends up enrolling in the Martian school where Professor Farnsworth works and joins Bender’s old fraternity. Fry’s frat antics are a spoof of the classic college comedy National Lampoon’s Animal House.

The season 2 episode “The Honking” is a parody of Joe Dante’s classic werewolf movie The Howling with a “werecar” taking the place of the werewolf. Bender is required to spend a night at a creepy old castle by his late uncle Vladimir’s will.

After being chased out of the castle by holographic “robot ghosts,” Bender is run over by a mysterious non-hovering car. Back in New New York, Bender transforms into a werecar and goes on nightly rampages.

The title of the season 3 episode “Insane in the Mainframe” is a nod to Cypress Hill. But its plot, in which Fry and Bender are admitted into a mental institution for robots, is a nod to Miloš Forman’s iconic psychological dramedy One Flew Over the Cuckoo’s Nest.

There’s a fun bit of wordplay with the episode’s robotic avatar for the chilling Cuckoo’s Nest villain Nurse Ratched with the name “Nurse Ratchet.”

Season 7’s “T.: The Terrestrial” is a hilarious parody of Steven Spielberg’s heartwarming sci-fi coming-of-age blockbuster E.T. the Extra-Terrestrial that flips the familiar premise on its head.

The Valentine’s Day-themed season 4 episode “Love and Rocket” starts off as a romance following Bender’s relationship with the Planet Express Ship’s onboard artificial intelligence. But it morphs into a spoof of Stanley Kubrick’s interstellar magnum opus 2001: A Space Odyssey when the A.I. reveals its sinister intentions.

From its beady red eye to the use of “Daisy Bell,” this episode is full of nods to 2001. When Fry, Leela, and Bender go to a place where the ship’s A.I. can’t hear them, the A.I. laments its inability to read lips (like HAL did in 2001).

Although its title is a play on Walter Lord’s non-fiction book about the sinking of the Titanic, Futurama’s season 1 episode “A Flight to Remember” is a direct parody of James Cameron’s historical blockbuster Titanic. On the maiden voyage of the Starship Titanic, the ship is once again met with a looming disaster.

The episode is full of characters, plot points, scenes, lines of dialogue, and even shots lifted straight from Cameron’s hit movie.

NEXT: 9 Thought-Provoking Sci-Fi Concepts From Futurama