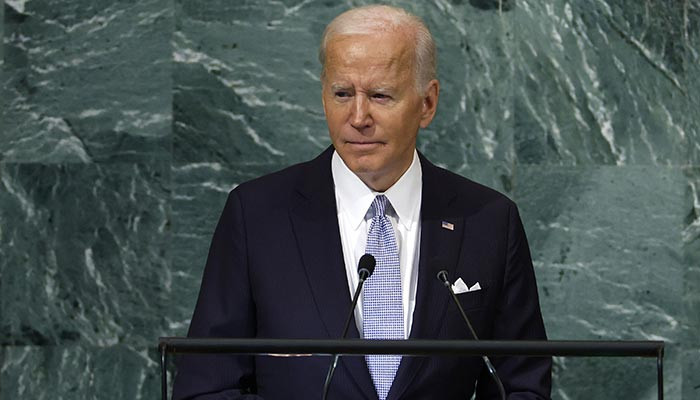 UNITED STATES: US President Joe Biden vowed solidarity with Iranian women Wednesday as eight people were reported killed in growing protests over the death of a young woman arrested by the morality police.

Addressing the United Nations shortly after a defiant speech by Iranian President Ebrahim Raisi, Biden saluted the protesters while renewing his support for reviving a nuclear accord with Tehran.

“Today we stand with the brave citizens and the brave women of Iran who right now are demonstrating to secure their basic rights,” Biden told the General Assembly.

Public anger has flared in the Islamic republic since authorities on Friday announced the death of 22-year-old Mahsa Amini, who had been held for allegedly wearing a hijab headscarf in an “improper” way.

Activists said the woman, whose Kurdish first name is Jhina, had suffered a fatal blow to the head, a claim denied by officials, who have announced an investigation.

Some women demonstrators have defiantly taken off their hijabs and burned them in bonfires or symbolically cut their hair before cheering crowds, video footage spread on social media has shown.

“No to the headscarf, no to the turban, yes to freedom and equality!” protesters in Tehran were heard chanting in a rally that has been echoed by solidarity protests abroad.

Protests filled cities, especially in northern Iran, for a fifth straight night Wednesday, with activists reporting clashes in cities including Urmia and Sardasht.

In southern Iran, video footage purportedly from Wednesday showed demonstrators setting fire to a gigantic picture on the side of a building of general Qassem Soleimani, the Revolutionary Guards commander killed in a 2020 US strike in Iraq.

Iranian state media reported that street rallies had spread to 15 cities, with police using tear gas and making arrests to disperse crowds of up to 1,000 people.

London-based rights group Article 19 said it was “deeply concerned by reports of the unlawful use of force by Iranian police and security forces,” including the use of live ammunition.

“Death to the dictator” and “Woman, life, freedom,” protesters could be heard shouting in video footage that spread beyond Iran, despite online restrictions reported by internet access monitor Netblocks.

In his UN address, Raisi pointed to the deaths of Indigenous women in Canada as well as Israeli actions in the Palestinian territories and Daesh’s “savagery” against women from religious minority groups.

“So long as we have this double standard, where attention is solely focused on one side and not all equally, we will not have true justice and fairness,” Raisi said.

He also pushed back on Western terms to revive a 2015 nuclear accord, insisting that Iran “is not seeking to build or obtain nuclear weapons and such weapons have no place in our doctrine.”

British Foreign Secretary James Cleverly said that “the Iranian leadership should notice that the people are unhappy with the direction that they have taken.”

The protests are among the most serious in Iran since November 2019 unrest over fuel price rises.

The wave of unrest over Amini’s death “is a very significant shock, it is a societal crisis,” said Iran expert David Rigoulet-Roze of the French Institute for International and Strategic Affairs.

Demonstrations first erupted Friday in Amini’s home province of Kurdistan, where governor Ismail Zarei Koosha said Tuesday three people had been killed in “a plot by the enemy.”

Kurdistan police commander Ali Azadi on Wednesday announced the death of another person, according to Tasnim news agency.

An additional 450 people had been wounded and 500 arrested, the group said — figures that could not be independently verified.