HomeVideoWhy It's Time for a Stargate Reboot
Video

Why It’s Time for a Stargate Reboot 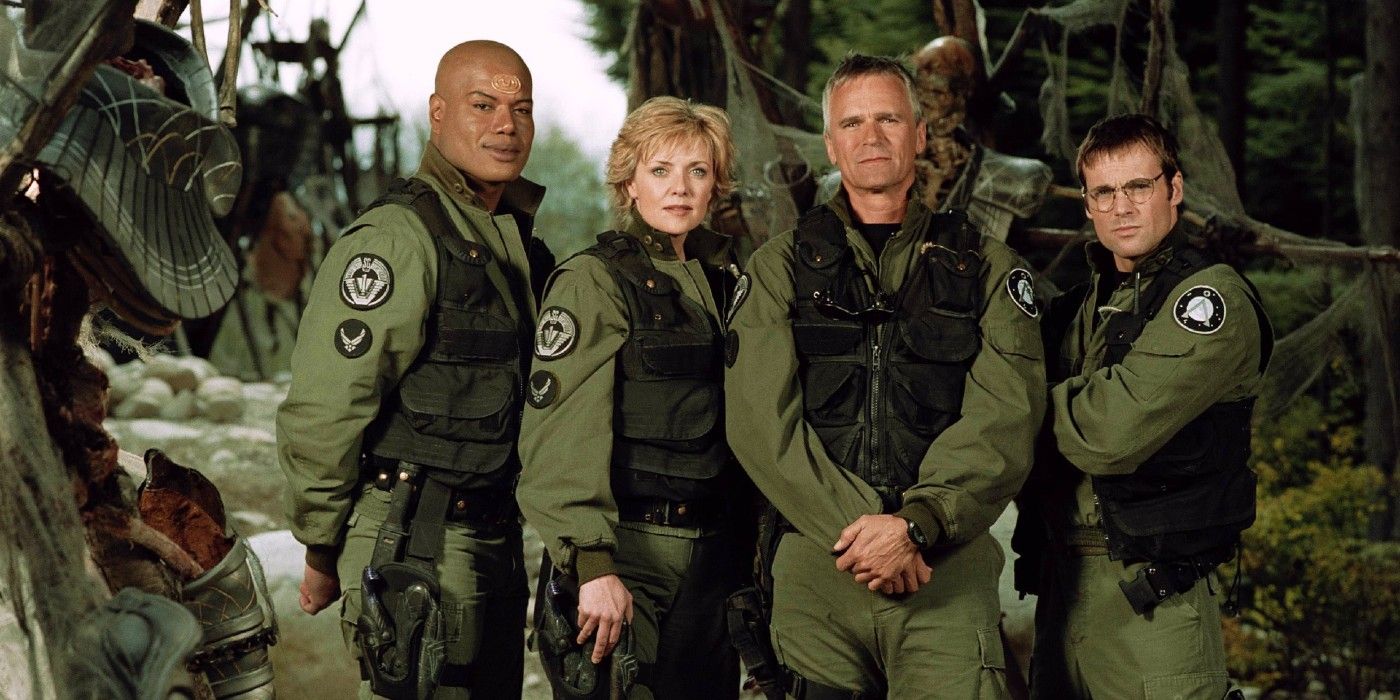 Despite the tired complaint to the contrary, reboots do what all stories do, borrow elements from other stories. Reboots borrow more than others, but this is ultimately beneficial as consumers are more willing to invest time and energy in stories and characters they already know and love. That’s why the time is right for the next great science fiction franchise revival: Stargate.

The Stargate franchise began with the release of a feature film in October 1994, followed by three television series that collectively ran from 1997 to 2010.The original Stargate film was directed by Roland Emmerich who also co-wrote the film with producer Dean Devlin. The film follows the discovery and subsequent study of a Stargate, an artifact found on an archeological dig in Egypt. Through painstaking study and translation, the Stargate is revealed as a navigation tool that operates by opening wormhole portals to other gates located on other planets across the galaxy and beyond. The film starred James Spader as Egyptologist Dr. Daniel Jackson and Kurt Russell as US Air Force Colonel Jack O’Neill.

Stargate: SG-1 premiered in July 1997. While it was not the film trilogy Devlin and Emmerich had envisioned, the series ran for ten seasons. The series begins not long after the events of the film and follows Colonel O’Neill (Richard Dean Anderson) and his Stargate “SG” team: Dr. Daniel Jackson (Michael Shanks), astrophysicist Captain Samantha Carter (Amanda Tapping), and Teal’c (Christopher Judge), a defector from the race of hostile aliens that appear in the film and series, on their many exploratory missions through the Stargate.

In 2004, as SG-1 entered its eighth season, Stargate: Atlantis debuted. This spinoff follows Dr. Elizabeth Weir (Tori Higginson) and Major John Sheppard (Joe Flanigan) as they lead a team of soldiers and scientists through the Stargate to the lost city of Atlantis, located not just on another planet but in another galaxy. A one way trip because of the incredible power required for such distance, the team quickly realizes they’ve entered the hunting ground of an empire of dangerous aliens. The show also starred Rachel Luttrell, Rainbow Sun Francks, David Hewlett, Paul McGillion, and Jason Momoa during its 5 season run.

Instead of following SG teams as the earlier iterations did, Stargate: Universe takes place mostly on an ancient spaceship that had been flying on autopilot for thousands of years. Researchers led by Dr. Nicholas Rush (Robert Carlyle) are attacked during an experiment involving connecting to a gate further from Earth than any before attempted. They escape the attack to find they had insufficient power to return. The motley crew of scientists, diplomats, government officials, and soldiers works together for their mutual survival. Universe, costarring Brian J. Smith, David Blue, Elyse Levesque, and Ming-Na Wen, ran for only two seasons, ending on a cliffhanger.

It Is the Perfect Time to Revive Stargate

Science fiction is more popular than ever and has proven its own staying power. From the continuing boom of apocalyptic dystopia in The Hunger Games, Divergent, and The Handmaid’s Tale to the powerhouse franchises that plan their movie releases a decade into the future, sci-fi dominates.

Historically the most recognizable of the science-fiction franchises, Star Wars and Star Trek are just as prolific. In the years since the Stargate last graced our screens, Star Wars has boasted five feature films and eight television series. Trek follows not far behind with two feature films and six series.

With all of this content, franchises are raking in cash and fans are pleased, but with the sheer amount and speed of content coming from these franchises, they are all dangerously close to market saturation and to burning out even the most loyal of fans. There is broad crossover appeal with Stargate for fans of these franchises. Reviving the rich and broad universe of the Stargates could provide a respite from universe-altering snaps, five-year missions, and galaxies far, far away.

RELATED: 10 Franchises You Didn’t Realize Have Their Own Multiverse

As in all genres, there are specific elements that make science fiction distinct: advanced technology, interactions with more advanced civilizations or bodies of knowledge, sometimes space travel, futuristic governmental or militaristic structures, and so on. Stargate is no exception, but it plays with some of these genre tropes to create a universe unique enough to warrant a second look.

The most obvious example of this uniqueness is the franchise’s approach to interplanetary travel. Those members of the SG teams explore newly discovered planets in search of new technology and new civilizations in a way that is not so dissimilar from Starfleet, but instead of ships with warp engines that allow them to travel many light years in short spans of time, characters in the Stargate universe travel instead through the wormholes created by the Stargates. Gate travel also eliminates the need for society’s technology to have sufficiently advanced, allowing people of our time to be the interplanetary heroes. Stargate plays with time travel as well by replacing the paradoxes inherent in it with visiting planets in which transplanted humans still live in the cultures of the past.

Humanity’s delusion of grandeur in the assumption that we will forever play an outsized role in all sentient life in the universe is a trope rejected. Stargate puts on display a human species that is refreshingly naive, reactionary, and woefully out of their depth. The same is true of the military tasked with running the Stargate program. At every turn, officers and enlisted service members alike are baffled, and elected officials providing “oversight” are nefarious. These characterizations level a biting critique of the entanglement between the military and scientific development.

Stargate: Atlantis and Stargate: Universe already began to prove the concept that there are few limits on what kinds of stories can be told from this franchise. As the gates can connect to an almost infinite number of planets, potential is inexhaustible. This narrative freedom lends itself to flexibility of storytelling arcs, making striking the balance between multi-episode arcs and episodic stories easy.

Stargate is one of the few major science fiction franchises with only one piece of foundational source material. Star Wars was a trilogy, Star Trek was a three-season show, and Dune has eight novels to name a few. As such, Stargate’s canon translates as more piecemeal than others’. A reboot is an opportunity to formalize and flesh out the lore.

Stargate Brings in Other Elements From Historical Fiction and Mythology

The way Stargate incorporates historical fiction and mythology is rarely seen in sci-fi. The deep embedding of Egyptology into canon lore broadens the appeal of the franchise. The longstanding conspiracy theories about ancient civilizations being impacted by alien races have been in the forefront of our collective consciousness since at least 2009 with the arrival of Ancient Aliens on the History Channel, and some of the most famous elements of those theories are present in Stargate lore. The mythology element may also welcome fans of the massively popular Percy Jackson franchise for its juxtaposition of mythology and modernity.

Ideally, a revived Stargate would also address the racist undertones of many ancient alien theories. Almost never applied to works of ancient European achievements, these theories are most often believed about the ingenuity of ancient societies of color. This theory exists to delegitimize the achievements of African people now and in the past, and a revival of Stargate can counter the bias implicit in this theory as a narrative device.

Stargate’s ‘yes and’ approach to world-building also created inconsistency in theme that could be explored with greater depth in a reboot. The military’s role in science and in interplanetary diplomacy, the tension of ulterior motives on scientific advancement, critiques of the cult of tradition, and exposing cross-cultural bias were integral to the Stargate mythos. Striking a more natural balance between the lightheartedness and social critique with intentionality could make the franchise truly great.

SG-1 lasted longer than the other entries in the franchise largely because of its characters. A few minor modifications to Colonel O’Neill and Daniel Jackson from the film version and the addition of Captain Carter and Teal’c created a team with dynamism and pizazz. The on-screen chemistry between the actors and their embodiment of these characters makes them among the most compelling, relatable, and subtly complex in the genre. A reboot would do well to imbue all characters, from any storyline within the universe, with the same wholesome humanity.

How will the top SEC teams fare entering October?