HomeVideo10 of the Creepiest Sets of Twins in Horror Movies
Video

10 of the Creepiest Sets of Twins in Horror Movies 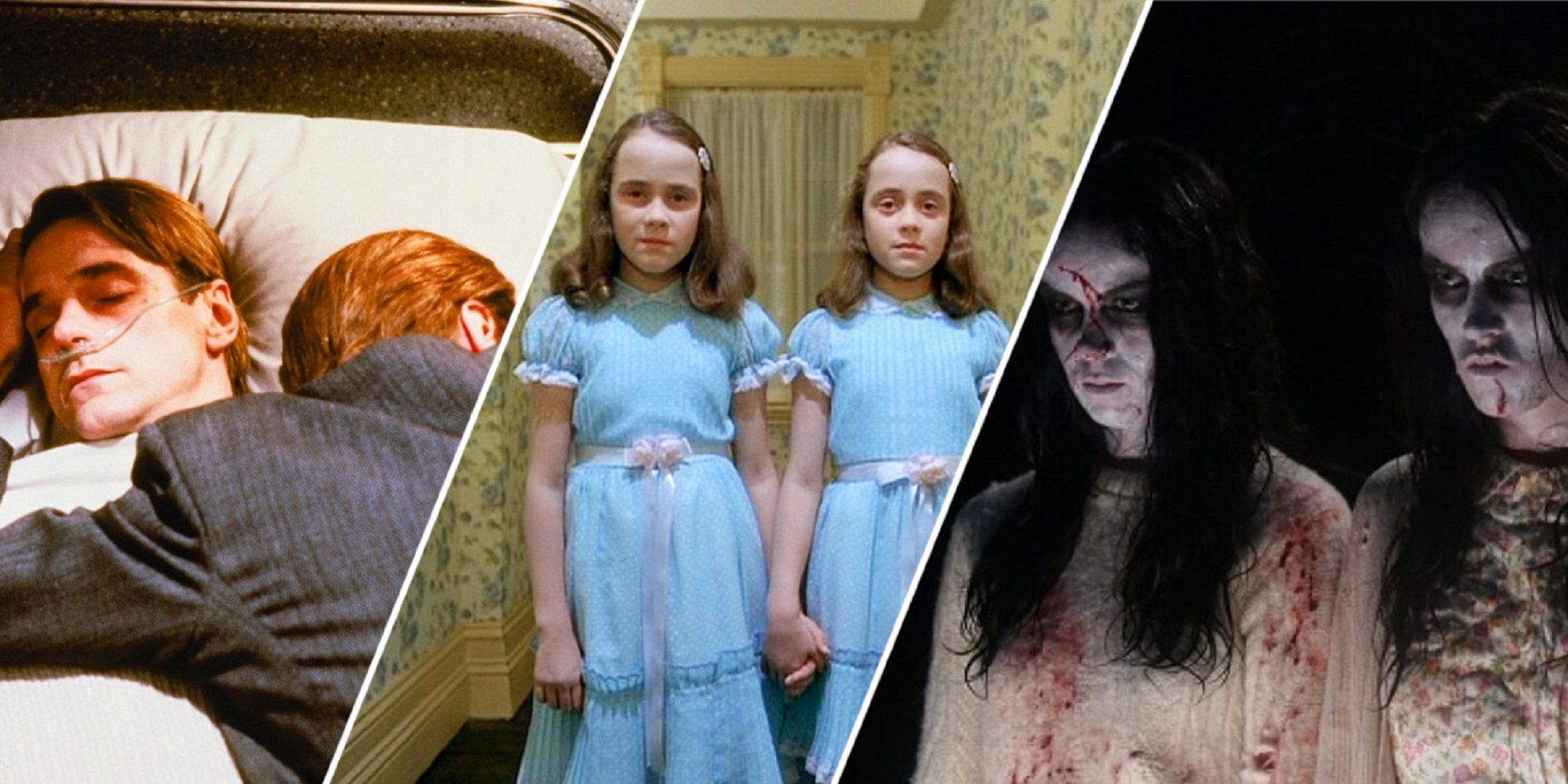 Things are always scarier in pairs—and they’re even more terrifying when it’s a pair of sadistic, murderous human beings. The horror genre understands this well, and the trope of creepy twins is used in some of the most disturbing films to cross the big screen.

RELATED: Best Werewolf Movies and TV Shows to Watch Only Under a Full Moon

Twins in horror are frequently seen as either dangerously co-dependent or as complete opposites of one other, one usually being good and the other evil. Twins remain popular in horror because they can serve as walking metaphors for duality and duplicity.

The creepy twins in the Austrian horror film, Goodnight Mommy, seem like your average, well-behaved boys (Elias and Lukas Schwarz) when their mother comes home from the hospital covered in bandages. The movie catapults into a dark and brooding foray into violence when the twins believe she’s an imposter.

The movie is delightfully sadistic and follows the story of a mother returning home with only her eyes and mouth visible and the rest of her head covered in thick bandages after facial surgery. To the twins, she looks near unrecognizable in both face and demeanor, and they begin to think she is an imposter. They stop at nothing to get their mother to confess that she is someone else.

In one of Brian De Palma’s best, journalist Grace (Jennifer Salt) is horrified when she witnesses her fashion model neighbor, Danielle (Margot Kidder), violently murder a man. She calls the police, but when the detective arrives, nothing seems to be amiss, and the scene is deprived of any evidence of murder. Grace takes things into her own hands and uncovers sinister secrets of Danielle’s past.

In this film, only one of the twins is evil—Danielle’s twin, Dominique (also Kidder). Dominique is furious at being separated from her sister; if she can’t have her, no one will, resulting in many gruesome murders.

In one of the more bizarre horror movies about conjoined siblings, Basket Case puts the “deranged” in killer twins. In the film, Duane Bradley (Kevin Van Hentenryck) is a normal-looking man who seeks vengeance for the unwanted surgery that separated him from his deformed conjoined twin, Belial, who he now hides in a basket.

The Siamese twins in Basket Case spend the movie trying to get revenge on the surgeons that separated them against their will, and the two brothers share a psychic connection that lends Duane his mutated brother’s wrath.

In another horror movie that contains conjoined twins, Malignant takes on the absurd and the evil in Emily (Annabelle Wallis) and Gabriel’s story. In one of James Wan‘s most eccentric films yet, a woman begins to have visions of people being murdered, only to realize that the terrifying events are happening in real life.

While the film is a bit out there, it was still lauded for its creepy atmosphere and adrenaline-packed action, even being up for the fan-favorite award at the 2021 Oscars. The psychodrama built around the heroine’s implied backstory lacks sincerity, but the twist towards the end is disturbing enough. Gabriel is revealed to be a large teratoma—Emily’s vengeful twin brother that never separated from her in the womb.

There is nothing subtle about the Soska sisters’ films, and American Mary is no exception. Not only do the real-life twin sisters direct their own horror films, but they often star in them too. In American Mary, the Soska sisters play nameless German twins obsessed with body modification and their connection to each other.

The creepiness factor here is not in what the twins do but in what they get done to them in the surgical room. These twins want nothing more than to share everything they have in a desire to fuse together. In the film, a surgeon removes both of their left arms and attaches them to the opposite sister’s body.

The Grady girls (Lisa and Louise Burns) in The Shining are the most well-known twins in horror history, despite not even being twins. With their frilly, powder blue dresses, iconic barrettes in their brown hair, and vacant stares, the girls turned into an iconic pairs in The Shining.

While Stanley Kubrick’s masterpiece was flooded with behind-the-scenes drama, the movie birthed some of the creepiest characters in horror. When the girls appear in the hallway in front of Danny on his tricycle, one smiling in a sinister way and the other one deadly serious, both of their eyes hollow, it’s hard not to double-check your hallways after midnight.

One of the creepiest sets of twins in film history is Elliot and Beverly Mantle of David Cronenberg‘s Dead Ringers. Both characters were played by Jeremy Irons with perfection. The brothers were based on a pair of real-life, drug-addicted gynecologist twins, Stewart and Cyril Marcus, who practiced in 1970s New York.

In the movie, the twins’ lives are so intertwined that they may as well be conjoined. They feed off each other’s obsessions, addictions, and lust. So much so that they become co-dependent on one another and fuel each other’s self-destruction. The movie follows them as they seduce their gynecological patients and slip into madness.

RELATED: Funny Horror Movies That Will Scare You and Make You Laugh in Equal Measure

House of Wax is one of the many horror films of the aughts that will make you never want to stop at a small roadside town to ask for help again. The movie is filled with disturbing wax figures, humans turned into live attractions, and being endlessly hunted with no remorse.

One of the movie’s creepiest parts is twins Bo and Vincent Sinclair (both played by Brian Van Holt). The two are introduced at the beginning of the movie as young children, one calmly eating his breakfast and the other having a violent tantrum as he is strapped to a chair. Throughout the film, it is discovered that the twins were originally conjoined, and while Bo is handsome and Vincent is disfigured, the evil twin isn’t the “hideous” one—Bo is the one filled with fantasies of murder.

This movie is yet another story that teaches you that people who look frightening are not always the ones to be afraid of. In the movie, twins Holly and Heather (Nikita and Jade Ramsey) were murdered 20 years prior, and the town they lived in still believes their father killed them.

The film sets you up to be terrified of the dead twins, as they set out for vengeance on the town and appear as nasty, rotting ghosts. But as they violently haunt a young woman in her aunt’s home, she soon realizes that the dead twins aren’t trying to hurt her but instead trying to warn her of the same fate befalling her.

Blood Rage is a classic good twin versus evil twin story. A woman and her adult son are stalked at their apartment by the son’s unhinged twin brother, Todd, who has escaped from a psychiatric institution after being accused of killing a man years earlier.

The movie is interesting in that the angelic-looking twin, Terry (Mark Soper), is the one who brutally kills a man with an axe when the two brothers are younger. He blames his innocent brother, Todd (also Soper), in an event that can only be explained by the fact that Terry has no feelings for his brother whatsoever. The film never gets into why Terry would do such a thing. He has no hatred for Todd; in fact, Terry has no feelings for anyone but himself.

The Winx Saga Season 2 Deaths Ranked (From Sad to Satisfying)

How to Fast Travel At The Base

The Winx Saga Season 2 Deaths Ranked (From Sad to Satisfying)